What if you were at death’s door? What if the next breath you took was destined to be your last? What if a tall, dark, and handsome stranger offered to save you? What if that offer came with strings attached?
Would you take the offer or would you choose to die?
Fortunately, we don’t live in a world where we have to make such decisions. We are, after all, mere mortals, bound by the rules of the natural world. We are born. We live. We die. We’re no different than a flower, beginning as a seed, bursting through the ground, flourishing under the sun, drinking in the rain, withering when our time is done.
Or are we?
Believers in reincarnation support the notion that when a body dies, the soul seeks out a new body, a new life. Pythagoras, the Greek philosopher and mathematician, taught the soul was immortal, merely residing in the body and therefore capable of surviving death. He believed the soul underwent a series of rebirths. Between death and rebirth the soul is purified in the Underworld. Only when the soul completes several cycles can it leave the reincarnation cycle.
I once read somewhere that “woman” was the highest form of reincarnation. Seems to make sense to me. We all love our sexy male heroes, but let’s face it, we females are much more evolved. Sometimes don’t you just feel as if you’ve been around for a looong time, as if you’ve seen it all, heard it all before? Probably because you have, dear sister. You’ve got an old soul inside you. One that is wise, worldly, and has most likely kicked some serious butt along the way.
So, for right now, you’re alive. Who knows if your soul is at the end of its cycle or if you’ve got many revolutions left to go? The important thing is to enjoy the ride…or rides as it were.
My character, Holly Brimmer, is offered a second ride after a horrible car accident causes her death. Find out what she decides to do in my paranormal romance, ABRA CADAVER, from The Wild Rose Press. 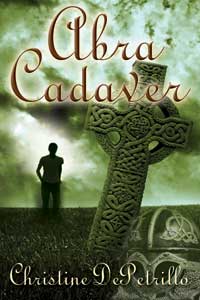 Blurb:
Holly Brimmer never expected to be brought back from the dead. After a fatal car crash, a mysterious stranger gives her a second chance at life—but it comes with a price. To stay alive she must pay it forward, accomplish an important deed, thus making her mark in the world. Until she does, her savior is bound to her. Now she has a backyard full of dead bodies and one unwanted houseguest.
Keane Malson kills bad guys to keep the innocent alive, but he’s still a monster. Cursed by a witch moments before an honorable death on the battlefield, he’s lived thousands of years, roaming from place to place with no end in sight. It’s a lonely life…until he meets Holly.
When a wanted man targets Holly, Keane will do anything to protect her, even if it’s the last thing he ever does.
Excerpt:
Slowly, Keane sat up and ran a hand through his hair. Holly was enchanted by the way the black strands fell back into place. Her fingers literally itched with the need to feel Keane’s hair against her own skin so she stuffed her hands underneath her legs.
Keane slid his legs off the bed and, holding onto the headboard, he stood. Holly edged off the bed as well and prepared to support him. He held out a hand as if to tell her to give him a minute. He took a few steps deeper into the room and turned around.
“Feel better?” Sweet Mary, he looked better. Damn perfect standing at his full height and rubbing his stomach with his hand.
“Much.” He came to stand in front of her. He was close enough for her to wrap her arms around him, but she didn’t. “Don’t let me do that again, okay? I felt human for a few moments drinking that beer, but it’s not worth the pain.”
“Guess you need tighter supervision.” A heat washed over Holly’s cheeks as she glanced up. His eyes were back to the brilliant sky blue, his skin flawlessly pale.
“Yes, Miss Brimmer. That’s exactly what I need.” He grinned, and Holly forgot the rules.
Where to buy:
ABRA CADAVER is available at The Wild Rose Press, Amazon for your Kindle, All Romance Ebooks, or by visiting my website at http://www.christinedepetrillo.weebly.com/. You can also find me at The Roses of Prose blog on the 4th and 14th of every month, and I’d love be friends with you on Facebook and Twitter!
I’m giving away one copy of ABRA CADAVER to one lucky reader. Tell me what you’d do if you were offered a second chance at life. Would you take it?
Toodles,
Christine
Posted by Annie Nicholas at 1:49 AM

In answer to your question--it depends. Would I know my loved ones? Would I start new with no memories? Without my family, I would be much more inclined to accept fate and let my soul continue on its set path.

In ABRA CADAVER, Holly gets to come back and pick up exactly where she left off. It's like her death was erased. In fact, she never tells her family she died.

I'd like to Thank Paranormal Romantics for hosting you today & I would like you to know that I really liked your Guest Blog, "At Death's Door".
It did give me one of those; "Things that make you go Hmmmmm" moments. A very thought provoking post of death vs. life?, what would I be willing to do for such a choice?, the notion of reincarnation?
You’re a new Author to me Christine, but you sure had the wheels in my mind turning, what an excellent Guest Blog to be able to do that in a short post.
You May have been new before, but I'm glad that I saw you here on Paranormal Romantics as a Guest Blogger. I'll be sure to check on your website, "Stories of Laughter, Love and Hope" for any future releases. I already saw additional Books while I was at your site that I'm going to add to my TBR List. Unfortunately I'm not a member of Face book or Twitter, so I cannot be a Follower there.

I just Love reading Paranormal Novels, but I suppose you never would have guessed that with my email address name. lol
Your Paranormal Romance Book, "ABRA CADAVER" seems like such a fresh new take on a Paranormal Romance.
Your Blurb & Excerpt intrigued me so much that I'd put your book on my "must read" list.

Holly Brimmer is back from the dead after a fatal car crash. She's given a 2nd chance at life by the mysterious Keane Malsona (who has lived thousands of years), but it comes with a price. To stay alive she must accomplish an important deed, making her mark in the world.

Now how could a Paranormal Fan pass wanting to read "ABRA CADAVER", I know not me.

I would appreciate if I could be considered in your give away of a copy of "ABRA CADAVER". For your question...Tell you what you’d do if you were offered a second chance at life. Would you take it?
My answer would have to be based on how old I am at the time. If I feel I have lived a full & loving Life with Family & Friends, I would embrace whatever is there for me in the afterlife.
If I feel I have left something unfinished, had not completed some impact of what my Life here was to do?....if I were offered a second chance at life, Yes, then I would take it. Even if my choice came with a price to stay alive because I would intend to accomplish an important deed, make a mark on the world.

Thanks again for the Great Post & for introducing Us to your new Book, both were very thought-provoking.

I'm with Hailey, if the second chance is with no memories or without my family, I'll skip it.

To be honest, I don't know if I would take the second chance at life or not. If I did, a lot of different things would change ( the Butterfly effect). BUT I do like life, so it would be a tough call.
mom1248(at)att(dot)net

Thanks for all the comments, folks. The winner of the e-book, ABRA CADAVER, is...PaParanormalFan! I'll be emailing you your prize shortly.

Thank you so much for the generous gift of an eBoook copy of your Book, "ABRA CADAVER". I can't wait to read Holly & Keane's Story, it sounds like a really good, fresh look at a paranormal story. Thank you.