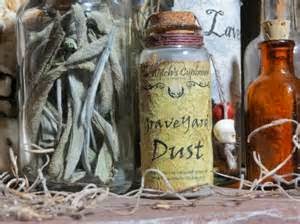 Graveyard dust. It sounds a bit creepy, right?Who in their right mind goes around scooping up soil out of cemeteries?
Well, believe it or not, a lot of people. The use of graveyard dust is common in many magical traditions. It is considered exceptionally powerful because of its associations with the dead and their proximity to the spirit world.


Victim, Healer or Perpetrator?
In many forms of folk magic, the person who’s inside the grave is significant. Dust from the grave of someone who loved you should be used in love spells, while dust from the burial site of a wicked person might be incorporated into curses and other malevolent workings. Dust from a lawyer’s grave can turn a court case your way, and soil from a detective or police officer may help catch a rapist. The dirt from a midwife’s grave lends spiritual aid during childbirth. Who knows, a little dust from a doctor’s grave could cure what ails you.
In other words, the dust from the grave is a physical correspondence with the traits of the person buried beneath it. And the closer the dirt was to the corpse, the more potent it is considered to be. The dust can be enhanced by combining it with moss scraped from the grave. Or mix it with herbs, nails, a magnet, sulfur, shedded snack skins, red or black pepper, or chimney soot, depending on how you will be using the mixture.
Here is how Nicholas Orenda, a sixth-generation witch in my upcoming novel, Song of the Ancients, approached his graveyard visit. Granted, he took a bit more than dust from the grave.


Nicholas pulled off the gravel road in the dwindling twilight, stopping at a rickety barbed-wire fence blocking the cemetery entrance. He unlatched the post, scraping the gate across the snowy ground and dropping it where the road’s edge fell off into the ice-crusted ditch.


He dug into his coat pocket and pulled out a handful of pennies, scattering them in the snow. “Alms for the dead,” he muttered. Somewhere behind him, a coyote howled a solitary note, and was answered by a chorus of voices from the dark woods.


Ahead, dull grey tombstones poked up from the earth at odd angles like rows of crooked teeth. Half-way into the cemetery a dark mound protruded above the snow.


Opening the trunk, Nicholas removed a flashlight, shovel, crowbar, and a small hatchet, dropping them into a burlap sack. He tucked the sack under his arm and headed to the new grave, his boots crunching to the ground as they broke through the icy film on the top of the snow.


The burial mound was soft and the digging went quickly.  While he pitched shovel after shovel of dirt over his shoulder, his mind returned to the idea of bonding with Samantha. A blood bond would be the strongest, although any bodily fluid would work. Blood could have the added benefit of tying them telepathically. Of course submitting freely, of her own will, would allow him to avoid resorting to dark magic and help keep his soul intact. Oops, too late, he thought, looking at the pile growing pile of dirt.


Why would someone sneak into a cemetery and bury a body? He could think of a number of mundane reasons, but why would a witch do so? Unless they defiled the body in some way and didn’t want anyone to know. His hole grew deeper and his unease increased.


Only three feet down his shovel hit something firmer than the soft soil, connecting with a muffled thud. Digging carefully down one side, he cleared a space to stand beside the box. He removed the crowbar from his sack and pried the coffin nails from one side, muttering softly. “Coffin nails, familiars of maggot and worms and unsavory creatures of the kind. Do my bidding, my evil works, when I so command.” Blowing on the nails, he pocketed them and opened the lid.


He held his breath and shone the flashlight on the body, a young woman, barely past her teens. Her hands had been folded across her body, and Nicholas could make out, in the flashlight’s beam, several places on her right arm where jagged chunks of flesh were missing.


Something had chewed on this girl. He fervently hoped she had died first.


Nicholas scrambled out of the hole, brushing the soil off his shirt and pants with shaky hands. He closed his eyes for a moment, took a deep breath and let it out slowly. Then he picked up the ax and the burlap sack, and dropped back into the grave.


Working quickly, he lopped off the corpse’s left hand and dropped it into the sack.  Closing the lid on the casket quietly, he gathered his tools and climbed out of the grave.


Nicholas gave a quick look around to be sure no prying eyes were watching before shoveling the dirt back onto the coffin.


For one moment longer he stood by the mound. Then he reached into his pocket, pulled out a silver dime and dropped the on the grave.


Satisfied, he ran his fingers over the mound to erase his footprints and scattered a few dry leaves on top. He looked around one last time to be sure he’d forgotten nothing, then hurried back to the car, holding the sack at arm’s length.


Dumping everything into the trunk, he drove out the gate without stopping.


* * * * *
Collecting Graveyard Dust
No matter whose grave you choose to collect dust from, it’s important to do so in a respectful and honorable manner. Graveyard dust must be purchased, through a contract with the spirit of the person buried there. There are as many approaches to buying graveyard dust as there are ways of using it, but here is one technique:


Supplies to Take:
* Trowel
* cloth or plastic bag
* tobacco and small bottle of whiskey (like the airline bottles)
* a mercury (silver) dime
* 9 pennies
* tea light in its container, and lighter/matches
* paper and pen
* Small pot of flowers


Waning Moon at Midnight
Some people say to visit the cemetery on the dark or waning moon at midnight for malevolent spells, or on the full moon for love and healing workings. I say let the rules of your cemetery be your guide. If you can enter the premises at night, then go after dark. If the cemetery closes at dusk, go before it closes. Honor the law.
Have all of your supplies in your sack and flowers in hand. At the gate of the cemetery, leave your 9 pennies in honor of the spirit who owns and guards all graveyards. Ask for his permission and protection while you do your work, and then enter.
Start in the center of the cemetery, walking by candlelight. Reach out with your thoughts and talk to the spirits of the graveyard. Tell them the magickal work you want to accomplish, and ask who among them will assist you. Wait for a ‘tug’ leading you in the right direction, and proceed slowly to the grave that calls to you. When you get there, place the candle on the grave and sit on top of it to meditate/pray with that spirit for a bit. Ask for permission and assistance, and if you get an affirmative answer, begin to buy the dirt.


Proper Payment
Take the graveyard dust from the appropriate area: over the head or feet for spells of persuasion, or if you want them to move in a certain direction; from the heart area for love. Cut out a small plug of sod, dig down about six inches for dirt, and put it in your sack or plastic bag. Then drop the silver dime into the hole in payment for the dirt, thanking the spirit and saying, “As I have paid you in silver, so shall you pay me in labor.”  Add a bit of tobacco or whiskey (you may ask the spirit if it has a preference) into the hole and replace the plug of soil.
Write down the name, birth and death dates of the grave on a piece of paper and include it in the bag. Hold the bag in your hands and ask the spirit a last time to help you. Leave the candle (if it’s in a fireproof container), to burn on the headstone, and place the flowers on the grave.
Leave the grave knowing you have the spirit’s assistance, Walk slowly and don’t look back. Thank all the spirits at the gate, and when you are outside, spin around three times before you leave, to confuse and detach any entities who may want to hitchhike home with you.
At home, spread the dirt out on a piece of foil to thoroughly dry, and then sift out any roots or rocks.
Store the dust with the name paper, and the moon phase when it was gathered. Every time you use it, call the spirit by name and command it to assist in your work, referring to the contract you made in the cemetery.


Shake Out Your Shoes
Graveyard dust can be used for foot-track magic, a form of sorcery in which one hurts or poisons a victim through the feet (ie, the graveyard dust mixture is sprinkled in the shoes of the victim, or on a path where the victim will walk). However, spells of revenge or retribution tend to have serious ethical considerations, and will almost always backfire on the user. Instead, consider methods of mediation and enlightenment to achieve your goals. One example, a graveyard dust spell for a fair inheritance, is posted on my website, www.writerSandy.com.