This may seem to fly off the pages of science fiction, but it’s a hot new research field and making rapid progress.
At the Toshiba booth at the Consumer Electronics show, Chihira Aico, a life-sized robot in a pink party dress with pearls, stood like a mannequin, perfectly still—at first. Suddenly, the android began to gesture wildly.
“I can be a news reader, consultant or cheerleader!” She threw her arms up and squealed, “I can get excited!”

Chihira is a new concept for a life-like android. Her creators intend to make her seem even more expressive when interacting with humans. By adding additional motors to her joints, engineers are refining her movements to make them appear fluid while programmers work on her language processing, improving her communications skills and responsiveness.  The ultimate goal is for the robot to read human behaviors and emotions, then mimic them, thereby appearing human herself.
This complicated piece of hardware has over 40 motors in her joints to coordinate her body’s movements. Fifteen tiny air pumps on her fact control the blinking of her eyes and the opening of her mouth as she speaks. Toshiba developed Chihira under the direction of Hitoshi Tokuda, the project leader. Osaka University performed the muscle research, building on previous work on prosthetic limbs.
On-lookers thought Chihira was creepy. What do you think? 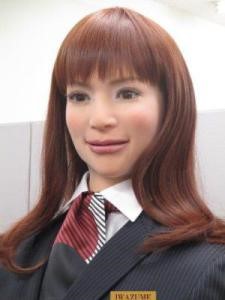 A hi-tech hotel in Japan, Nagasaki prefecture's Henn-na Hotel, opening in July will employ ten robots at the check-in counter as receptionists. If you think these humanoid androids are creepy, you might think twice about visiting this hotel. They can establish eye contact and respond to body language.
A recent Pew report entitled, “A.I., Robotics, and the Future of Jobs,” suggests that while it might be some time before we see a robot takeover of our workforce, we’ll be having sex with them sooner than we think. Hum. Interesting. Would you find a sentient being programmed to love you disturbing?  When I wrote Love For Sale, I didn’t know about the Japanese life-like robots. I don’t find them creepy but extremely interesting. I’d love to interact with a human-like android.
My sci-fi romance, Love For Sale, is about Christian and March.  March is a disenchanted dreamer. Christian is her dream man, but…inside he’s all circuits and wires while outside he is perfectly human and programmed to love her unconditionally. 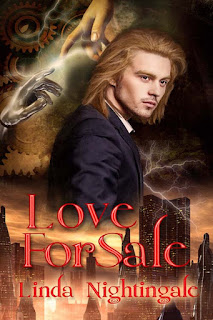 Blurb:
March Morgan still believes in true love, but her faith in finding her soul mate is slowly vanishing.  She’s been married but never in love.  So, it is a miracle to find that fantasy exists on the last page of a glossy women’s journal.  Mayfair Electronics, Ltd., in black and white, offers Love for Sale.  The London firm has engineered sentient androids indistinguishable from human.  She flies to England and meets the man she has been searching for her entire life.
Christian requires no programming to love March at first sight.  He’s handsome, cultured…absolutely perfect…and a little different from the other androids.  He has an unexpected independent streak.
March signs on the dotted line, buying her dream man.  They return to Houston, but soon her past and his future threaten their Happily Ever After—indeed their lives.

Excerpt:
Her heart shattered as he turned and walked away. Grief winded her. At the door, he glanced over his shoulder, again shaking his head. He was stunningly handsome, looked sad and hurt, but there was no apology in his intense gaze. Hands fisted at her sides, she tried to control the storm of fear, anger, resentment and pain.
“Where the hell are you going?” Her voice came brusque, short.
“For a walk to let you think and cool down.” Light and shadow chiseled his face, and her breaking heart skipped a beat.
“You can’t walk out. It’s impossible for you. You’re faulty in some circuit somewhere. I’m going to return you.”
The most beautiful man in the world froze with his hand on the door. “Please don’t. This is a misunderstanding.” He blew out a long breath. “However, if that is what you want, I must advise you that Mayfair Electronics, 21 Dover Street, London, W1S 4LT will accept return of a flawed unit for a full refund.”
“Stop! You sound like a robot.” Her fisted hands struck the air.
He didn’t flinch. “I am a robot. That’s why this is an inane conversation.” 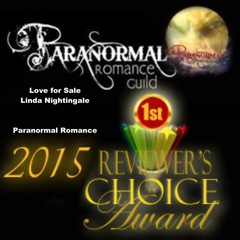 “Inane? I find you with another woman in the bedroom, and this conversation is silly? Oh, no, Christian. Did you invite her here?” Why couldn’t she stop hurting herself and let him go, lock the door and email Mayfair for a courier pickup?
Folding his arms across his chest, he leaned against the door. “She knocked. I answered and kept her outside until it started to rain. She was talking about the club and telling me, again, I’d be a success as a male dancer. Being a success at something would be a bloody miracle. At any rate, half-jokingly, I asked her to teach me to dance. The End.”
“Not quite. Why did you slip her out behind my back?”
“I wished to avoid a scene like this.” His voice shaded deeper, darker. “And I didn’t want to hurt you.”
“There, it’s said. You can come back in now and stop pretending you’re leaving.” She waved a hand, half-heartedly beckoning. “You’ve got nowhere to go.”
He inhaled sharply as if she had punched him in the stomach. “I’m quite aware of that fact. I do not like seeing you this upset. Please call Mayfair tomorrow. I’ll voluntarily deactivate. They’ll dispatch a FedEx pickup for me.” 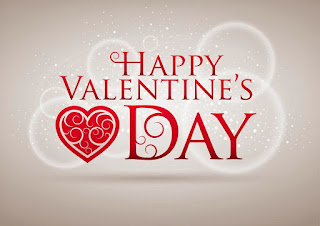 Posted by Nightingale at 5:28 AM

I don't know, I've seen too many of those movies with 'evil robots' or dolls coming to life to want to stay in that hotel run by them, lol. Interesting post!

This seems like something out of a sci-fi movie. But I bet it will be a reality sooner than we think. Great post, Linda.

I have to say I find the concept for you book fascinating, and refreshing. What an interesting concept.

Thank all of you for dropping by and reading my little Happy Valentine's Day Blog! Personally, being single, I wouldn't mind a sentient android like Christian in Love for Sale. I'm in the midst of writing the sequel.

As much as I find those robots fascinating, they still creep me out! Loved the excerpt. :)

EEck. Reminds me of that series Humans. It is very interesting though. Great excerpt, BTW.