For the past several days, I’ve been re-watching Buffy the Vampire Slayer from the beginning. I’d forgotten how it was as much a wonderful ensemble cast and a story about how a hero needs friends, as it was about how alone Buffy was, even with those great friends around her. Her mother, her watcher, and her friends loved her, but they very rarely understood her, expecting her to deal with incredible burdens and still be the perfectly behaved daughter, the unwavering slayer, the understanding confidante. And to get her homework done.

I also had this idea in my mind of Buffy as the inspiration for so many of our kickass heroines in urban fantasy today, but in fact, she was quite different from many who came after. Buffy may have broken through a barrier for female characters by being the hero in the tale, but she was as flawed as any human being, and she got the crap beaten out of her all the time. She basically spent most of the time just holding her own against the never-ending tide of evil spewing out of the Hellmouth. Which is kind of what life feels like most of the time, isn't it? 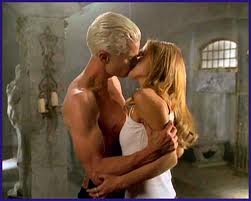 I think what I’m liking most about her right now is how vulnerable and imperfect and misunderstood she is. I’m not sure Buffy’s legacy is urban fantasy heroines after all. Mostly, she’s a strong, believable female lead, which is something we still don’t see much of in Hollywood 16 years later. When we do see women in the role of “hero,” it’s often as a woman who acts like a man—or should I say, acts like a man is expected to act: tough, violent, and emotionless. I’d like to see more heroes, both male and female, with traditionally “feminine” traits, and less of either sex being hypermasculinized.

Wouldn't it be great to see a female 007, mixed with the Doctor, mixed with Sherlock Holmes, who uses her brain, her wit, and her compassion to defeat the forces of evil? Hmm. Maybe I’ll write one. But if I do, she’ll have to be marvelously flawed.

What kind of women would you like to see more of in urban fantasy? How about men?
Posted by Jane Kindred at 12:00 AM

Thank you for saying that what we mostly get is women who are manly-men with boobs (and other female equipment). I'm known as a Wonder Woman fan, and this is what gets WW into too many problems in my eyes: so many writers think she's Superman with boobs (or even worse, these days they think she needs to be fully defined by the men in her life because the idea of being a strong woman is just, you know, stupid).

I think this is why I like Katniss Everdeen so much, because she's basically clueless and on occasion and after a lot of pondering (and making mistakes), she doesn't do things that she's expected to do. She doesn't embody typical feminine traits, but she does embody human ones. Like Buffy, she throws light on the human condition.

Also just watched the episode this evening where Buffy loses her slayer abilities for the Watchers' test. It was a great reminder of what it's really like to be female in the real world. She walks home early in the evening and gets harassed by two guys joking about her giving them a lap dance, and because she's only human and they're two adult males in a car who are bigger and stronger, and she's alone and outnumbered, she hurries away in fear. This is everyday life as a girl or a woman, and it sucks. The men doing the harassing think it's a funny, harmless joke...to terrorize someone who doesn't know if she's about to be raped or is just the object of their privileged amusement. So yay for Joss Whedon getting that right, too.