That Awkward Moment When... with @MeganSlayer

Anyone ever have that awkward moment when you're staring at the computer and you know you should be doing something, but nothing comes to mind? Maybe it's right after a gigantic writing session or a frantic promo blast. It could be after the family has gone to bed and you're alone with the story or you've found a quiet nook at your favorite writing spot... Ever had that moment?

I had a fellow author tell me that authors should never have downtime with a story. There should never be a moment when he or she cannot find some sort of words to put on the page.

Here's the thing. Authors do have this problem. It's called writer's block. It can be called procrastination. It's also been known to go by the name of NaNo Overload.

Ever heard of those?

I have. I've lived them. I am living them.

I just finished NaNo. Know what that is? National Novel Writing Month (or NaNoWriMo for short). It's every November. 50,000 words in 30 days. To some, this is therapy. To others, torture. Some use this as their way to catch up and get wordage in. Others simply stare at the screen and try not to cry due to stress.

Me? I had my moments of tears. I mean, 50,000 words is a lot of words. Okay, maybe not for Stephen King or Nora Roberts, but it is for me. There's some serious stress involved. I had moments where the words flew from my fingers and I thought, yeah, I got this.

I did got this...so to speak. I nailed it. 50,330 as of yesterday at 11:30 pm and the story isn't done yet. That's the best feeling--the story isn't done, but I reached the minimum word goal. Phew. Now to get print length where I want to sub the book requires 60,000, but I've got at least that left in the notes, plus two sex scenes to write. So yay me!

Either way, I did get to blog today and got to talk to you, so that's pretty good. Have YOU ever had that awkward moment? Want to talk about it? Commiserate? I'm all ears.


How about a snippet from my latest release, since I'm here. Sure! 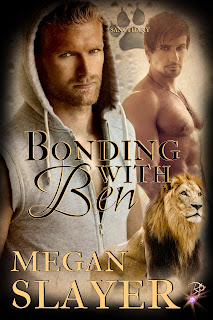 Sometimes the biggest hurdle in life is accepting who you are and what you want.

​
Joe Dallas thought he’d escaped the draw of the shifters at the Sanctuary. He doesn’t mind. With his tendency to keep relationships simple, he doesn’t want to get involved with a lion shifter. Then there’s Ben. The quiet shifter piques Joe’s attention. When Joe accompanies Ben on a rescue mission, he realizes the attraction isn’t one-sided. But can a shifter and a human really make a relationship work? Joe isn’t sure.

Ben knows who he wants in his life and bed—Joe. The lion wants to bond with the human he desires. The difference in their species doesn’t bother him a bit. Will the shifter be able to convince Joe they have a future or will fear dominate and destroy the love before it can blossom?


Warning: Once you’re in the sight of this shifter, you may be the “mane” attraction. This lion doesn’t give up until he has his prey.

What was it about Ben that kept Joe thinking about him? He closed his eyes and stood under the searing-hot spray. With other guys, Joe did the casual thing. Have a good time but no strings, so no one got hurt. Until now, that plan had worked. Right?
Kind of. Sure, he had nothing holding him down, but when he looked at John and Markas together, jealousy hit. He wanted that kind of devotion. Would he get it with Ben?

Ben was certainly different. He was innocent and deserved someone worthy of him. Joe wasn’t worthy of too much of anything. He’d had a little too much fun and broken a few too many hearts along the way. Ben needed true devotion and a good match.

Joe snorted. He was great as a reporter and nosy as hell, but he sucked at relationships. Ben deserved a partner, not a player.

Still, he liked Ben. He worried about the shifter and wanted him to be happy. Could Joe make Ben happy? Doubtful.


This was one situation he couldn’t screw up.​

​
http://wendizwaduk.com/indexMegan.htm
Megan Slayer - It's Always Fun to Squirm
Subscribe to our newsletter ~ http://ymlp.com/xgjmjumygmgj
Posted by Wendi Zwaduk and Megan Slayer at 10:14 PM 1 comment:


Recently, we’ve celebrated three holidays—Columbus Day, Halloween, and Veterans Day—and Thanksgiving is upcoming, unless you’re in Canada and have already celebrated that holiday. That got me thinking about holidays the characters in our books celebrate. And that’s a part of world-building.

If you have a fantasy world and/or a futuristic one, have you given holidays a thought? Do the people worship a deity? Is a day of the week set aside for worship? What about honoring explorers or the original settlers of the planet or territory? Annual celebrations?

Did the explorers bring their religion and celebrations with them from their former homes? Do they worship a single deity or multiple ones? Your story, your world.

In Switched Resolution (the 3rd book in my Switched series), an annual celebration honors the Intrepid Ones—those stalwart souls who left their dying home planet and settled on Serenia, so named because it was their hope for their new planet.

In The Chameleon (2nd book in my Outer Rim series), the people on the hero’s planet honor a female deity they call The Matriarch. One day a week is set aside to honor her.

As you write your stories, keep celebrations in mind.

Diane Burton writes romantic adventure . . . stories that take place on Earth and beyond. She blogs here on the 13th of each month and on Mondays on her own site: http://dianeburton.blogspot.com/
For more info on her books, visit her Amazon Author Page.
Posted by Diane Burton at 6:00 AM 2 comments:

Identifying and treating a loved one suffering from...NaNoWriMo

I've received your recent inquiry about the odd behavior of your loved one. It's understood that you use the term 'odd behavior' loosely, as you've come to accept the many unusual characteristics displayed by a loved one who is a...writer.
The symptoms you describe are indeed disturbing, but after a glance at the calendar, I believe I may have found the diagnosis...and the cure.

I believe your loved one may suffer from...NaNoWriMo!

Please don't become upset over the unusual term, it's really just an abbreviation for the more cumbersome title, National Novel Writing Month. The good news is that it only lasts for the month of November. Your loved one should return to their normal self—though exhausted, depleted, and often exhilarated—come the start of December.

Please review this partial list of symptoms to confirm this diagnosis for yourself to see if it does indeed, match your loved one's odd behavior which has become even more...unusual.

The list of symptoms continues, but basically your loved one is no longer 'there' most of the day. They've 'left' to immerse themselves into their story. Don't try to fight it, or question the rewards of this sacrifice, your writer knows what they are and the lure is more intoxicating than any cult...they can't resist.

Remind yourself that this one month will bring your loved one a great sense of accomplishment and...a new story for the world.

Because there are never enough stories

Do you or your loved ones suffer from NaNo? If so, what remedies would you like to share?


Maureen L. Bonatch's stories boast laughter, light suspense and something magical in the hope of sharing her love of finding the extraordinary in the ordinary world.