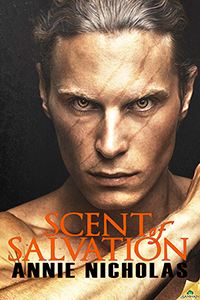 
Stranded in another dimension, on a primitive version of Earth, Dr. Susan Barlow needs to find a way to survive. There’s no electricity, no cities, and to her shock, no humans. Instead, she faces a population of werewolves, vampires and incubi. The people are vicious but she must find her place among them. And live.


An illness is killing Sorin’s pack. As alpha it’s his responsibility to save them, but it’s a battle this warrior doesn’t know how to fight. Then a blue light in the sky brings a creature he’s never seen. She calls herself human, but to him she smells like hope.


Sorin offers Susan a safe haven in return for a cure, but she’s not that kind of a doctor. She’s a doctor of physics, not a physician. Yet as they search for a cure to save a dying people, they find something special—each other.


But even with Sorin’s protection, Susan can’t help but wonder how long she can survive in a world without humans…


Warning: Feral shifters, power-hungry vampires, and a sole human female suffering culture shock.
Amazon
B&N
Apple
I love telling the story of what inspired this story because it shows how twisted my mind is. LOL
Both my sons were very ill with strep throat. Fever for days. When one was awake, the other was asleep, and vice versa. In other words, I had slept more than a few hours in days. I felt like the Tylenol, Ibuprofen, and antibiotic dispensing machine.
About two in the morning, I had both boys in one bed so I could watch them together. My oldest’s fever was raging and I was waiting anxiously for the meds to kick in or I’d have to place him in a cool bath. Again.  I was sitting on the floor and rested my head on the mattress and fell asleep.
In a matter of minutes, I dreamt of this whole world. I spent the next nine months writing book one and about a year editing it. If you’ve read where this story comes from and read the book, you’ll see much of the inspiration within it.  By the way, my boys are fine. Thank goodness for antibiotics.  :D
Susan is faced with Sorin’s sick pack. He offers her sanctuary within his small, poor den if she saves his people, but this Earth hasn’t developed technologically as ours has. There’s no Walgreens where Susan can get an antibiotic or supplies to create a vaccine. She has rock and fire and her knowledge to save this suffering pack.
I know how Susan felt as I watched my children suffer, waiting for the meds to take effect. I’m so thankful that I had those medicines in the first place. I doubt either of my boys would have survived without them.