On the cusp of a glorious New Year it’s time to reflect on all the dumb writing mistakes we’ve made in the past twelve months; dangling modifiers, an overabundance of commas, misspellings, wrong word usage. The lists go on for each of us, but fear not, we keep famous company. 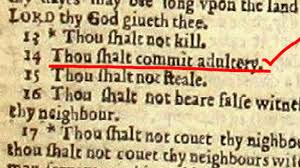 A History of Boo-boos
Some of the most famous books, past and present have had their share of problems and not even having God as an editor helps. In 1631 Robert Barker and Martin Lucas, the royal printers for Charles I, put out a new edition of the King James Bible with a teensy little error. Glory hallelujah, adultery was now not only legal, but required. The book soon became known as the Wicked Bible, Adulterous Bible, or Sinners’ Bible. All have a nice ring to them. Neither the king nor the Archbishop of Canterbury had a sense of humor and the publishers of the Wicked Bible were called to the Star Chamber and fined £300. Copies were destroyed, but a few escaped and are now highly sought after collector’s items.

You’d think having won a Nobel Prize in Literature for a dang book means a letter perfect copy, but not so. There have been multiple editions of The Good Earth by Pearl S. Buck, but the first, second, and third are flawed. Page 100, line 17, describes a wall. “It stretched out long and grey and very high, and against the base the small mat sheds clung like flees to a dog's back.” Copies of the book that include the misspelling can go for as much as $9500.

In The Adventures of Tom Sawyer, Mark Twain’s Huck Finn spoke in dialect. “Spos’n” in place of “supposing” isn’t a mistake, but hidden in the first edition is a genuine (or gen-you-wine) error. “I took the bag to where it used to stand, and ripped a hole in the bottom of it with the was.” I’m supos’n he meant the saw.

An American Tragedy by Theodore Dreiser is one of the more well-known examples of poor copy editing. It’s rife with small typos such as “if” for “it” or “to” for “too”, but some really miss the mark. On page 340 he describes people “like two small chips being tossed about on a rough but friendly sea.” My only question is Doritos or Lays?

Modern Mistakes
Mistakes are not a thing of the past. Typos and
grammatical errors have become increasingly common. The explosion of self-publication gets a bad rap, but big-time publishers are equally guilty. The hot mess of the Twilight trilogy had so many mistakes that websites are devoted to them. George R. R. Martin’s Fire and Ice Series is rife with errors and plot inconsistencies. Even Harry Potter isn’t immune. A rare first edition with the word “philosopher” misspelled on the back cover sold for £43,750. The all-time Big Daddy of modern typos has to go to The Pasta Bible, published by Penguin Group Australian in 2010. The company recalled 7000 copies of the book when someone discovered a recipe for spelt tagliatelle with sardines and prosciutto told cooks to “add salt and freshly ground black people.”
Disregard, for a moment, any self-published books that have obviously never seen an editor’s hand. If it seems mistakes are on the rise, even in releases from major publishing houses, you’re not mistaken. Publishers used to exist for the purpose of distributing as near perfect copy as possible. Errors were met with chagrin. Not anymore. Before the recession and the onset of digital publishing, companies had armies of copy editors clutching their little red pens. Manuscripts went from editor to galley proof then revised proof and finally blue line. Each step in the process was another chance for review and correction of mistakes. To cut expenses, companies dumped droves of copy editors and then leaped on the bandwagon of digital publishing.  Ebook sales soared. Expenses for book production plummeted while overall profits shot skyward. Large publishing houses such as HarperCollins, Penguin Random House, and Hachette are rolling in dough, but no one rehired the editing staff. No wonder mistakes slip by. The Pasta Bible gaffe was blamed on a spellcheck error. Someone should tell the CEO of the Penguin Group you can’t depend solely on a computer and still need a sharp pair of human eyes.
Egad. My Book has a Boo-boo
So what does all this mean for today’s self-published writer? First, find yourself a good editor. There are plenty out there and they can use the work. Produce the cleanest manuscript you can and stop beating yourself over the head if a typo makes it into your final work. They will. They always do. Shrug it off and submit a corrected copy and be proud of your creation. If you find a typo in a book from a major publishing house, don’t bother to send them a message. They couldn’t care less.

L. A. Kelley writes fantasy and sci fy adventure novels with humor, romance, and a touch of sass. She aways licks for hypos. Check out her books on her Amazon Author Page.
Posted by L. A. Kelley at 12:30 AM

Your post made me feel so much better, L.A. After my last book came out, a friend told me about the errors she found. I appreciated that so I could fix them. Still, as many times as you read your own book, typos slip through.

Great post! I am always on the look out for typos, but I know how the eye can overlook something easily! I received a lovely Christmas decoration with the names of my family on it. I immediately noticed that the name of my daughter (the writer) was spelled wrong, so did she. Good to know you are always licking for hypos! lol

Some of those typos are hilarious! I'd be cringing to find an error of that magnitude in one of my books, and it puts into perspective that mistakes happen even to the best of us. Fun post, L.A. :)