Remembering Your Roots by Melanie Card

*Melanie will giving away an ebook copy of Ward Against Death. Please leave a comment with your email address to be entered. Open internationally*

Thank you Paranormal Romantics for inviting me here today. A little while ago Justin Bieber made a donation to the Stratford food bank where his mom had turned to for support when he was young… well, younger. I normally don’t pay much attention to the celebrity scene, but because I live in the area the donation made the local news. And I, being a Stratford girl myself, was thrilled to see my hometown (and hometown celebrity) making news.

I have great respect for Justin acknowledging where he comes from and how he got to where he is now. I think this is a valuable trait (in real people and for fictional people—the author in me just can’t stop applying things to fiction). Whether you were happy or not, had it easy or struggled, or was somewhere in between, we learn valuable lessons as we go through life. Lessons, like: if I run, that boy in my kindergarten class who wants to kiss me will chase me. If I take a risk, like write a story in journal class instead of writing about myself, I’ll find encouragement. Of course, some risks also ended in rejection and failure… alright, a lot of risks ended badly.

All of these things, however, have made me who I am today. Just like all of Justin’s experience have made him who he is.

From a fiction perspective, I think it’s important to consider these roots when writing a character. Find out who they’ve been and who they are to help find out who they’re going to be. These are the details that, for me, make characters fuller, deeper, well-rounded. Just like we have full, complete lives with experiences that we might never forget, so, too, should our characters.

For example, the hero of my YA fantasy novel, Ward Against Death, was born into a family of necromancers, except he isn’t a very good necromancer. This being unable to “fit in” among his family drove him to embrace the complete opposite of necromancy: medicine. Unfortunately for my hero, when we meet him he’s been kicked out of the physician’s academy and forced to fall back on the family business as his only career option. No matter how much he wants to pretend that part of himself doesn’t exist, he can’t. The question for him then becomes: will he embrace his roots or keep fighting them?

As for my heroine, she’s fully embraced her roots. Daughter of the man controlling all criminal activity in the city, she’s following her mother’s footsteps as an assassin in the Assassins’ Guild. She believes this is where she’s supposed to be and what she’s supposed to be doing… at least until someone murders her. Now, when she’s woken from the dead by our hero at the beginning of the story, she begins to question who she is and what she wants to become.

Like the characters in my books, I cannot ignore my roots. I, like Justin, must embrace who I am and where I’m from—which isn’t that difficult. Stratford was a great place to grow up and I have some wonderful friends there. For our fictional characters, we, as writers, probably shouldn’t be so kind. Challenging histories make for fun, challenging presents and futures.

Thanks for joining me today. Do you have a favorite fictional character with compelling roots? 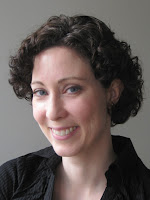 Melanie has always been drawn to storytelling and can't remember a time when she wasn’t creating a story in her head. Her early stories were adventures with fairies and dragons and sword swinging princesses.

Today she continues to spin tales of magic in lands near and far, while her cat sits on the edge of her desk and supervises. When she’s not writing, you can find her pretending to be other people with her local community theatre groups.

Get your copy of Ward Against Death at: 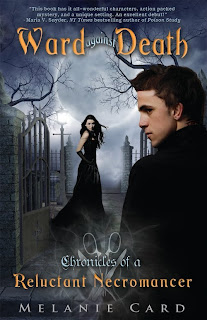 CHRONICLES OF A RELUCTANT NECROMANCER - Book One

Twenty‐year‐old Ward de’Ath expected this to be a simple job—bring a nobleman’s daughter back from the dead for fifteen minutes, let her family say good‐bye, and launch his fledgling career as a necromancer. Goddess knows he can’t be a surgeon—the Quayestri already branded him a criminal for trying—so bringing people back from the dead it is.

But when Ward wakes the beautiful Celia Carlyle, he gets more than he bargained for. Insistent that she’s been murdered, Celia begs Ward to keep her alive and help her find justice. By the time she drags him out her bedroom window and into the sewers, Ward can’t bring himself to break his damned physician’s Oath and desert her.

However, nothing is as it seems—including Celia. One second, she’s treating Ward like sewage, the next she’s kissing him. And for a nobleman’s daughter, she sure has a lot of enemies. If he could just convince his heart to give up on the infuriating beauty, he might get out of this alive…

Enjoy this excerpt from Ward Against Death:

“I think,” Ward said, his voice soft, “that this is much bigger than you.”

“Bigger than me? I’m the Dominus’ daughter.”

He looked at her with his brown eyes, and she knew she’d found her moment. She set her cup aside and knelt at his feet, clasping his hand between hers.

“You’re right. This is our first good lead and we should follow it. But it can wait a moment. We’re celebrating you. And you haven’t finished your drink.”

“That’s because you topped it up.”

She smiled and sat back on her heels. “Because I plan on getting you drunk and taking advantage of you.”

He laughed and took a long swig from his cup. “No, really, I should—”

“No.” She skimmed her hands up his thighs to his waist and leaned in, brushing her nose against his. “Really.”

He gasped and flushed. The strength of her advance was risky, but she no longer had time to play it slow. She knew he found her attractive. Now was her only opportunity.

She ran her hands up his chest, along his neck, and cupped his jaw between her palms. If she closed her eyes, she could imagine Ward was the innocent, honest man she’d believed. Beneath her fingers, she could feel his noble heritage, the chiseled lines of his cheeks and jaw. His betrayal hurt more than she thought possible, and she pressed her lips to his before she could change her mind.

He froze, and his lips trembled under hers. It was too fast, too soon, and she eased back. But he caught the back of her head with his hand and deepened the kiss with a sudden, intense need, sending a shock of pleasure through her.

Celia gasped, caught off guard. She shouldn’t have been. When Ward decided to do something, he committed fully to it.

I'm always fascinated by character back story. I love to know what has made them who they are and influenced the decisions they've made throughout their life.

Great to see you here, Melanie! :)

Great interview, Melanie! I love hearing about an author's process when developing characters.

By the way, your cover is gorgeous!

Thanks for bringing Melanie to us, Paranormal Romantics.

Ohhh, the excerpt's so intriguing! Would love to read it! Thanks for the giveaway:)

Thank you so much for the giveaway and interview! margaretmay_15@yahoo.com

Hi everyone, thank you for the warm welcome, and thank you again to Paranormal Romantics for inviting me here today.

Congrats to Jen B. Random.org picked you as the winner to received Ward Against Death. Melanie will contact you soon! ;-)