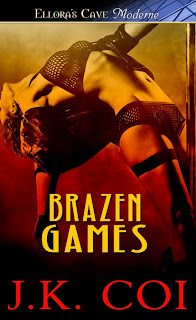 As Jack Trainer watches the dancer up on stage in front of him, all he can think about is that sultry green-eyed stare and the brazen way she moves, as if just for him. Trouble is, he knows this particular siren is a distraction he can’t afford, despite the gut-clenching desire she stirs in him. As right-hand man to a mob boss fighting a violent turf war, his life expectancy is already significantly reduced, and that’s if his damning secrets don’t get him killed first.

Tasha Morris is keeping secrets of her own, and she knows all about the real Jack Trainer, the one he can never afford to let anyone see. She also knows he’s close to the edge of no return. It’s her job to make sure he doesn’t implode and get them both killed, but to do that she’ll have to trust him with more than just her body, something she hasn’t been able to do with anyone.

As the risks multiply and the danger becomes insurmountable, Jack and Tasha will be forced to put aside their mistrust and work together. But when all their carefully manufactured lies come crashing down around them, the consequences might just be too much for either of them to bear.

He turned away, shifting his attention back to the dancer onstage. Having progressed well into her routine, she spiraled around the tall metal pole, her movements fluid and sure.

As if she could feel his eyes on her, she turned in his direction. Jack felt the heat of her gaze like a sucker punch to the gut. Dangerous.

She went by the stage name Brazen. It fit her too damn well. When she danced, it seemed the entire place went quiet as everyone watched, entranced. And to his own disgust, Jack was no exception.

She knew it, too.

The music slowed to a drugging, rhythmic beat. With the pole between her legs, she leaned back, bending her knees and lowering herself almost to the floor. Her breasts pushed upward as she arched her spine deeply.

One hand released the pole and dragged a path over the fabric of her costume cupping her breast, then sliding over her belly and lower still until she pulled up the hem of her skirt, showing off the scrap of black thong beneath. Cupping her hand over her sex, she easily thrust her hips, humping the pole in time to the music.

Jack couldn’t have looked away now if a bomb went off beside him. He didn’t care about Moretti and his waitress grunting away beside him, or that it wasn’t even the most depraved thing he’d seen—or done—in the last few months.

The routine wasn’t overly extravagant. She didn’t outperform the other dancers with amazing feats of acrobatics and she didn’t use inventive props. But she moved like she was born to do exactly this, exuding confidence and sex. It blew off her in waves of heat, saturating the already pungent room until she had every guy’s attention and most of the women’s as well. She used her power to hypnotize and entrance. She was a sorceress. A siren.

Climbing back up the pole, she reached behind her back. As if she danced for him alone, she faced Jack. With a snap, the skimpy bra sagged, the straps sliding off her shoulders. Then she whipped it off, swinging the garment in a wide circle over her head before flinging it behind her.

Those were some damn perfect tits.

J.K. Coi is a multi-published, award winning author of contemporary and paranormal romance and urban fantasy. She makes her home in Ontario, Canada, with her husband and son and a feisty black cat who is the uncontested head of the household. While she spends her days immersed in the litigious world of insurance law, she is very happy to spend her nights writing dark and sexy characters who leap off the page and into readers’ hearts.