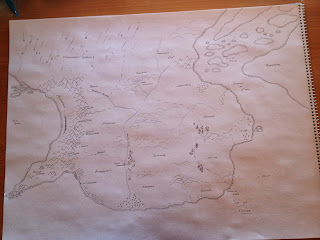 This is a map that I drew for my upcoming Twelve Kingdoms trilogy. It's on my mind because I just returned from a conference that my editor for this trilogy (Peter Senftleben, Kensington Press) also attended. Not only dig he take me and the hubs out for an amazing seafood dinner, but he also told me they want to include the map in the books.

It's funny because, whenever I mention that I had to draw this map - at Peter's request, because it was in my head, but apparently no one can see inside there - people get all excited. And then they tell me the first book they ever read with a map in it. Most of the time it's either Tolkien or Anne McCaffrey. But they all - readers, writers, agents, editors alike - get this gleeful look in their eyes, talking about their first "map books."

What is it about those maps? Because, oh yes, I absolutely spent my time poring over the maps of Pern, Middle Earth, and Terre d'Ange. Clearly I still do, as you'll note the Jacqueline Carey's world was not part of my youthful reading. There was something magical about studying a map of an imaginary world that made it more real. It seemed somehow, that if I could follow a Rand McNally road map from Colorado to New Mexico, then surely I could travel from my world to theirs. It's as if the map provides a gateway, portal to entering that world the book offers.


Jeffe lives in Santa Fe, with two Maine coon cats, a border collie, plentiful free-range lizards and a Doctor of Oriental Medicine. Jeffe can be found online at her website: JeffeKennedy.com or every Sunday at the popular Word Whores blog.

She is represented by Pam van Hylckama Vlieg of Foreword Literary.
Posted by Jeffe Kennedy at 7:00 AM

I love maps of towns in fantasy books. I can't draw to save my life, everyone has to have flaws. I bought the software program ProFantasy (http://www.profantasy.com/) to help me make my maps and draw castle blueprints.

ooh, fun! I used to draw a lot more, back in high school and before. It was fun to dredge up those skills again.