I love anthologies, don't you? They are such a fantastic way to both get several books at once, but also to discover new favorite authors. I'm always on the hunt for more fantastic reads. This month I'm part of one I'd love to share. Below is info about the anthology along with an excerpt from my book, Her Demigod Complex!

7 FREE books--each a first in series--in one great anthology! Find your new book boyfriend/valentine (and a few new favorite authors). This will go away Mar 1st, so snap it up now! 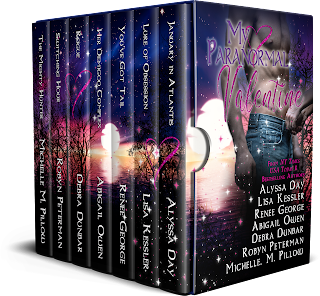 Seven of the top paranormal romance authors writing today have joined together to bring you a set of first-in-series novels to help you celebrate Valentine's Day in style - with your very own paranormal Valentine.

STORIES IN THIS ANTHOLOGY

From New York Times and USA Today bestselling author Alyssa Day:
January in Atlantis: Poseidon's Warrior Flynn's mission may be derailed by a woman who's on the run. Will the heat between them be strong enough to save the day--or burn down the world?

From Amazon Best Selling author Lisa Kessler:
Lure of Obsession: Detective Nate Malone has been marked by the gods to protect the Muse of Tragic Poetry. When a killer sets his sights on her, Nate will risk everything to protect her, and tragedy isn't part of his plan...

From New York Times and USA Today bestselling author Robyn Peterman:
Switching Hour: Released from the magic pokey and paroled with limited power is enough to make any witch grumpy. However, if you throw in a recently resurrected cat, a lime-green Kia and a sexy egotistical werewolf, it's enough to make a gal fly off the edge.
Not to mention a mission...with no freaking directions.
If they think I'm the right witch for the job, they've swallowed some bad brew.

From New York Times and USA Today bestselling author Michelle M. Pillow:
The Mighty Hunter (Lords of the Abyss) The merman may have rescued her from death, but who’s going to rescue her from him? Welcome to the underwater world of Atlantes!

From International Bestselling Author Debra Dunbar:
Rogue: Sabrina had a hot sexy night with a bear shifter during her wolf pack's annual barbeque—then never heard from him again. Sent to track down a murderous rogue, she's surprised to find herself partnered with Karl—the same bear shifter that has been fueling her fantasies for the last year. Can Sabrina trust a brooding bear shifter with secrets of his own to have her back as well as hold her heart?

From USA Today Bestselling Author Renee George:
You've Got Tail: Psychic Sunny hightails it to the Missouri Ozarks to find her missing friend Chavvah, only to discover romance with her friend’s younger brother, a kidnapping conspiracy, and a town full of secrets that some will kill to protect.

From Award-Winning Author Abigail Owen:
Her Demigod Complex: As an ex-nymph, Lyleia Naiad has the unique ability to resist her boss's demigod-like charms. The man's been breaking hearts for millennia. But Castor Dioskouri shows her a different side--compassionate, dedicated, protective and loyal. And that Castor is nearly impossible to resist. Attending a werewolf mating ceremony together--where the pheromones fly, and so do clothes, inhibitions, and common sense--might be one temptation too many. 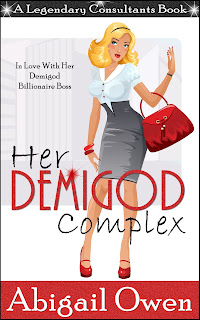 When Legendary Consultants placed Lyleia Naiad in her job as Executive Assistant to a high-powered billionaire, she was given one directive–do NOT fall in love with him. Given that he’s a demigod, a successful businessman, and handsome as sin, makes that a tall order for anyone. But as an ex-nymph, she has the unique ability to resist his god-like charms.

Or does she? More than a year later, Castor Dioskouri has managed to capture her heart, a feat no man, demigod, or god has ever managed. Given the reason she was hired, she’s kept her feelings to herself. Besides, Cas is still in love with his deceased wife from over a millennium ago, and Leia is a failed nymph who couldn’t protect her own spring.

But now, they must attend a werewolf mating ceremony together. An event where the pheromones fly, and so do clothes, inhibitions, and common sense.

Can Leia resist her heart and her boss? Or will she lose her pride, her job, and her mind trying?

“What’s the purpose of the trip?”
“We’re negotiating a new contract, and the full board of the company we’re dealing with will be present and together that weekend.”
She nodded.
Castor leaned back in his chair. “We’ll be attending a wedding, so I assume they have a block of rooms reserved. You’ll want to check that.”
She lifted her head. “Wedding?” That was a new one. They’d traveled to social situations before, mixing business with pleasure. But never a wedding.
Castor grimaced. “Pamela was supposed to go with me.”
Leia’s fingers paused on the keyboard. “Was she planning to take notes or work for you?”
He tipped his head. “No.”
“I see.”
A twinkle entered his eyes. “Problem?”
Secretly, she got a kick out of his devilish sense of humor, though not as much when directed her way. Or when she was annoyed with him in return.
She straightened her posture. “What is my role on this trip?”
“My Executive Assistant. What else?”
Now a smile tugged at his lips. She forced herself to look him directly in the eye. “Not as a date?”
“You’ll go with me to the wedding, which could be construed as my date.”
“But I’m only there as your assistant.”
He crossed his arms, his muscles straining the fine material of his navy suit. “Yes.”
“And that’s how you’ll introduce me?” While she was suspicious of the situation he was outlining, a frustrating ray of hope that he might actually want her there as his date niggled at the back of her mind.
“Of course. Why?”
She didn’t like that twinkle, which, if anything, grew brighter.  “What aren’t you telling me?”
“I’m wounded that you don’t trust me, Ms. Naiad.”
Wisely, she kept her mouth shut. Like every other god and demigod she’d met, Castor would do whatever it took to get his way.
The twinkle changed to a scowl as he stood and came around the desk. “The wedding will be under the Banes/Canis names.”
So he was not going to perjure himself by lying to her. She ducked her head to hide her twitching lips. Even when she was irritated with him, she found him charming. Wrong. Wrong. Wrong. Not charming. Annoying. Not that those mental instructions made any damn difference.
The names he’d shared sunk in and her head snapped up. “No.” The word punched out of her.
“What?”
“I’m not going.”
Did the sky outside darken? As a son of Zeus, Castor’s emotions were sometimes reflected in the weather, but a quick check revealed blue skies outside and his next words were softly put. “Why not?”
“I don’t go to werewolf mating ceremonies.” Not after the last one. And especially not with Castor Dioskouri.

GET STARTED ON THIS + 6 OTHER PARANORMAL ROMANCES

One click away . . . Can't wait to read. Sounds delightful!

Sounds like fun. I love anthologies. Good way to meet new authors. Good luck, Abigail, to you and your co-authors.

Sounds like a lot of fabulous authors! How fun! Best wishes.