I love reading authors' accounts of how a story came about, what inspired them to write that story. Wish I could tell you how Rescuing Mara's Father came about. Like many of my stories, I'm sure my Muse whispered in my ear while I was in that twilight between sleep and awake. She does stuff like that.

I didn't intend to write a children's book. Until I shared it with my daughter (a middle-school teacher), I thought I was writing a Young Adult novel. She said, no, it's middle grade (ages 9 -12). Huh? Groan. I didn't know anything about MG stories.

So off I went online to read samples of MG books. Holy smoke! She was right. The sound, the adventure, the characters. Middle Grade. I did more research, looking at other stories that my grandkids (ages 11 and 9) read. Rick Riordan's Percy Jackson and Heroes of Olympus series. J.K. Rowling's Harry Potter. Madeleine L'Engle's A Wrinkle in Time, J.R.R. Tolkien's The Hobbit. Say what? The Hobbit?

That's when it hit me. When I taught sixth grade, I read A Wrinkle in Time and The Hobbit to my students. (If my teaching days weren't so far behind me, I would've read Riordan's books to those kids.) I've read the Percy Jackson series, I loved the Harry Potter books. I did know MG stories.

As I reread Rescuing Mara's Father, in preparation to sending it off to my editor, I recognized the elements that made it a story that would appeal to that age group. The ages of the characters (16, 15, 11), friendships, camaraderie, high stakes, a life-death adventure. I'd instinctively written a Middle Grade story.

At last, a book my older grandkids could read. They know I'm a writer. They've "approved" my covers. They also know they have to be older to read my books. Now, they won't have to wait so long. 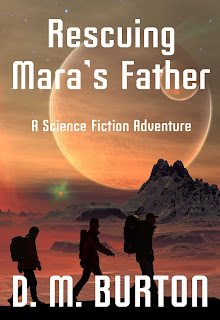 My father is gone! Taken by the Queen of Compara’s agents. I have to rescue him before the Queen tortures and kills him.
Never mind, we’ve had a rocky road lately. Instead of the kind, loving father I’ve always known, he’s become demanding, critical, with impossible expectations—not just as Father but also as the only teacher in our frontier outpost. I’d rather scoop zircan poop than listen to another boring lecture about governments on Central Planets. Give me a starship engine to take apart or, better yet, fly, and I’m happy.
Never mind, Father promised I could go off planet to Tech Institute next month when I turn fifteen, where I’ll learn to fly starships.
Never mind, I ran away because I’m furious with him for reneging on that promise. Father is my only parent. I have to save him.
Posted by Diane Burton at 8:35 AM

I loved A Wrinkle in Time! What a nice story - kind of like the story found you.

I enjoyed reading the story of how Rescuing was born. Is this your only middle grade book?

Hi! I loved the post. The book sounds very interesting!

How nice to have a book your grandkids can read! And how interesting that it was unplanned. Can't wait to read it!

Very fun read and it's just a snippet! Another story to open our readers to worlds that might be.

Wow...so interesting to know how other authors' books come about. Isn't it wonderful when an element or elements of an unfamiliar genre sets your book apart?

Maureen, I think you're right about the story finding me. I still have the original Wrinkle in Time that I read to my 6th graders back in the early 70s. I have most of the rest of the series, too.

Linda, this is my 1st MG story. I don't think it will be my last, though. It was fun to write.

Thanks, Patty. Unplanned is right.

You are so right, Francesca. I love the sci-fi world--aliens, other planets, characters that are like us.

Pam, it was so bizarre. I can't say the story wrote itself, but my Muse had a lot of input. LOL I think she was channeling my g'daughter.

You've found your perfect audience! This is exactly the type of story I would have loved as a voracious reader in that age group. I think I've found a gift for my grandguy!