All I Want for Christmas is Paranormal Romance

Every year I eagerly await all the Christmas romance that comes along. Back in the nineties it was Harlequin seasonal books. Usually 1 or 2 in each of their imprints. I would get them as stocking stuffers.

These days holidays in romance happens sooner. We start seeing those Christmas themed books in October and Hallmark starts their movie run not long after. And I get to see my favorite combo in all sorts of ways.

Except... I have always lamented the lack of good holiday themed paranormal romance. For obvious reasons--different world building that may or may not include a celebration of the Christmas holiday season--we don't get nearly the numbers.

We've put it all together in a limited-time boxed set anthology--Christmas After Dark! I hope you'll check it out! 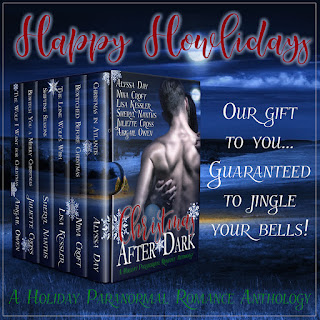 Cozy up and get lost in supernatural worlds of shifters, gods, Atlanteans, werewolves, witches, and more… A holiday treat guaranteed to jingle your bells!

CHRISTMAS AFTER DARK is a boxed set anthology of novellas from six of the hottest paranormal romance authors out there.

Warning: Christmas After Dark contains alpha heroes, sassy heroines, sizzling connections, holiday traditions, wicked intentions, snow and mistletoe, heart-racing suspense, and a little something naughty (but not too naughty, because we don’t want to bump you off the nice list). And it’s our gift to you…

STORIES IN THIS ANTHOLOGY
Christmas in Atlantis by Alyssa Day:
Warrior-turned-pirate, Dare is the black sheep of all Atlantis, and black sheep and scoundrels can never deserve love. But it’s the season of miracles in Atlantis. A chance to make wishes come true. And when Lyric, an artist who sees the world through song, tells her new Atlantean friends O Henry’s story of The Gift of the Magi, the world—and Lyric and Dare—may never be the same.

Bewitched Before Christmas by Nina Croft:
Christmas is a time to spend with family, but Lola’s don’t seem to want her back. Instead, she’s stuck in the wilds of Scotland under the protection of Lachlan MacNair, a blood-sucking monster, who’s determined to make sure she has the sorriest Christmas ever. Things go from bad to much, much worse when Lola sees a vision of herself kissing Lachlan, under the mistletoe.  Lola is a powerful witch and her visions of the future always come true. Until now. Because this one… Never. Going. To. Happen.

The Lone Wolf’s Wish by Lisa Kessler:
Shane Dodd has lost everything, his Pack, his home, and hope. His only wish this Christmas is to live long enough to exact revenge on the Nero assassin he believes killed his Pack. But when he steps between a bullet and Piper Holland everything changes. The woman dressed as one of Santa’s elves is his mate, and she ignites a flame in his heart. But hope and love are dangerous wishes for a lone wolf.

Shifting Seasons by Sheryl Nantus:
Cassie Nyre is looking forward to a quiet and lonely Christmas—until she finds an injured animal on the way home. Her big heart has her bring the hurt otter into her home and into her bathtub, to rest until Christmas Day when she can deliver it to Animal Control. But the next morning she finds a semi-naked man in her bathroom—and it’s not Santa Claus!

Bewitch You a Merry Christmas by Juliette Cross:
With a Christmas curse to break and a Karaoke party to plan, all Evie really wants is time with her werewolf boyfriend. Private time. All-night-in-his-arms time. But as hex-breaker of the Savoie Sisters coven, the most powerful in New Orleans, she needs to take care of business and family favors first. After that, Mateo Cruz and his broody, sexy self is all hers.

The Wolf I Want for Christmas by Abigail Owen:
Cade Campbell has spent ten years in hiding, preparing to return to his small town, the pack his uncle stole from him…and the mate who doesn’t know she’s been waiting for him. When he shows up on Shyla’s doorstep a few days before Christmas he discovers the sweet, quiet girl he grew up with is all woman. The problem is she’s become a loner, is obsessively neat, and allergic to dogs. Bad news for this wolf. Still, Cade’s not giving up on her or on taking his rightful place as alpha. Maybe this year Santa could finally get things right.
Posted by Abigail Owen at 9:42 AM

Congratulations on your release!

Sounds like an interesting anthology. Congrats to you and the other authors.