Half the fun of writing fantasy is the fact that it doesn't take place in our world. Which is great, until you realize you have to create an entire world from scratch, then it feels like the hardest thing ever. How do you make a world that follows some reasonable set of rules while keeping things interesting? What if you don't want to write seven billion pages of backstory because you want to jump right into the story idea floating in your head? Where do you even start to build a world, and what are some things to avoid when you do? Today, let's tackle world building 101.

Why do I need to world build?
Look at you, asking great questions right off the bat! Have you ever read a story where the writer skipped the world-building step? It was awkward, right? Something was missing. It would be like making a coconut cream pie and forgetting the pie crust. Delicious? Sure, but messy as all get out. Writing in a fantasy world without world-building is the same.

Where do I start?
Is writing back story is your jam? Then, go ahead and tackle those long world-building lists. They'll ask you things like: What language do people speak? What do they eat/wear? What's the money system? Religion? And so on. But, if you're like me, you just want to write the story in your head begging to be written. If that's the case, you'll need to start with which aspects of this new world fit within the story's timeline. Does your story start at the dawn of creation? No? Then skip to the year your story does take place in this fantasy world. Who's in charge? Does it matter? What kinds of things does your protagonist experience because of the world they live in? You'll need to know what kinds of things they eat/see on a daily basis/wear/etc.

What kind of rules does my world need?
There are so many fantasy worlds and with each one comes its own set of reader expectations. But, generally, if there's magic in your world, you'll need rules for it. If there are magical creatures or plants we've never heard of, you'll need rules for them as well. Sure, these plants and magics can do amazing things, but there also has to be a limit to what they can do. Sometimes that means there's a quantity cap, and other times there's a time limit. For example, in The Curse Breaker, my debut novel, magic-born can use their magic, but it takes a physical toll on them so they can't use it forever. You'll need to do something similar in your own fantasy world to keep things interesting.


Don't be too scared of world-building. Once you get the hang of it, it's tricky to go back to writing in the real world! What are some of your favorite tips when it comes to world-building? Share them in the comments below. 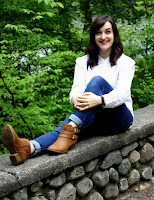 April Jones has read, written, or edited her way through numerous fictional worlds. When she's not teaching or writing, she spends her time trying to learn other languages or keeping her mischievous cat from eating the pet fish. She received her bachelor's in English and her M.F.A. in creative writing.

A Tennessee native, April currently lives in Michigan with her husband and three children. You can find her poems and short stories published in various literary magazines across the internet and in print. You can also check out her debut novel, The Curse Breaker. For more information visit her website thepathtostory.com

April Jones
I'm a chocolate enthusiast, binge writer and mother of three. My days are spent in child to child negotiating and Daniel Tiger songs. Most often you'll find me in yoga pants in front of the stove or kissing my kids' cheeks.

Great post, April. I love building my own science fiction world. When I wrote my sci-fi adventure for middle school kids, I put it within the larger world of my Outer Rim series but on totally different planets. I'd already built that world and my readers are familiar with it.

Like you wrote, I didn't start with the moment of creation but plunged my readers into the story. As needed, the "world" revealed itself. For me, I have lots of details. For the reader, only those details that mattered. As with backstory, the author always knows more than the reader. Enjoy your world building.

I enjoyed the post! I too like to dive right into the story and sometimes have to go back and add in some world building so the reader can 'see' what's in my mind.