Welcome to our guest Rosalie Redd. Rosalie interviews one of her characters. 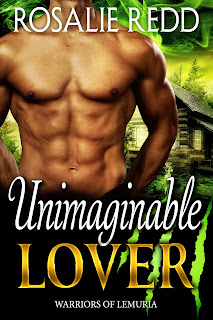 Want to meet Tanen, the hero of Unimaginable Lover, book 3 in the Warriors of Lemuria series? I sat down with him for a brief interview…
Did you turn out the way your parents predicted?
Tanen adjusts himself in the chair and straightens the collar on his shirt. His brow furrows. “Much to my chagrin, no. My father was a warrior. I was a disappointment to him."

I squirm in my seat. I am uncomfortable in the presence of this large male. “Why is that?"

He crosses his arms, his biceps bulging tight against his shirt sleeves. “Because I didn't follow in his footsteps. Instead, I chose to pursue knowledge and my love of the ancient scriptures."

What do you value most?
He studies me for a moment before answering, his gaze flicking over my features. “King Noeh’s respect. I will do whatever he asks to help win this war against our enemy, the Gossum, and for our goddess, Alora."

I can't help but smile at his sincerity.

What is the trait you most deplore in yourself?
The muscles in his arms visibly tense. His gaze tracks to my necklace, and he cracks his knuckles. "I'd rather not say."

My unease is once again forefront in my mind. The chair is suddenly rock-hard beneath my bottom and no amount of heat in the room will take away the chill running down my spine.

What is the trait you most deplore in others?
The smile returns to his face. His blue eyes swirl with gold flecks, mixing together in a beautiful dance.

Despite my nervousness, I’m mesmerized.

When he didn't elaborate further, I clear my throat. “Thank you, Tanen, for the interview.”

He places his hand over mine and gives it a gentle squeeze. “You’re welcome, Rosalie.”

A shifter and a human together? Unimaginable…

One careless decision. The colony betrayed. Tanen’s only course is a desperate hunt for justice, but his solo mission is cut short when he’s mortally wounded during a fight. Rescued by a sweet, innocent female who nurses him back to health, he can’t deny the passion that burns between them. Now he must choose between his duty and honor or his desire for the precious, but forbidden, human female.

Broken promises and ruined love hardened Sheri’s heart. When she finds an injured and extraordinarily sexy man on her property, she’s pulled into a world she never imagined. As she nurses him back to health and they bond over their love of books, she’s torn between the lessons she learned from her rough past and the need to seek solace in Tanen’s arms, but she must learn to trust him, and herself, in order to survive.

Sheri’s pulse raced as a strange mixture of shock and desire coursed through her veins. The tall, muscular stranger pinned her against the wall. One second she’d pressed 9-1—on her phone and the next, she was here, in his arms.
His biceps bulged, and she had a sudden urge to run her fingers over them, feel the steel that was below the surface, but her hands were trapped at his hips. She gripped his taut waist, and his heat bore into her, warming her fingers, tingling the sensitive nerves. Although caged in his embrace, he was gentle with her, holding back the strength that ebbed from him in waves. As he leaned in, his breath cascaded over her shoulder, warm and enticing.
“No infirmary.” His gravelly, rough command came out on a whisper.
She should’ve feared him, this stranger in her home trapping her in his arms, but instead, her insides melted, warmed by his touch, his voice, his scent. Something about him made her long for more.
So focused on the man who held her so close, she hadn’t noticed Coop. His insistent barks echoed through the house.
The man tensed, and in the process his lean body pressed tighter against hers. Her skin prickled at the contact.
With a quick glance over his shoulder, she caught sight of her pet. He growled, his lips curled over his fangs.
“No, Coop. Stop!”
His back legs bunched in preparation for his attack.
The man didn’t release her, but turned to face her dog. He held out one hand, palm open. “Halt.”
Coop’s growl faded.
He took a tentative step forward.
His nose quivered, and a small whimper eased from his chest. Her pet, an ex-police dog trained to track and defend, placed his muzzle under the stranger’s palm.
She gasped. If she hadn’t seen this for herself, she wouldn’t have believed it. He patted Coop on the head, and the dog’s tail beat against the floor.
The man’s eyes were red-rimmed, and sweat coated his forehead. “I have to leave…”
His eyes glazed over, and his grip around her waist loosened.
As her hands traveled along the space between them, her fingers trailed over the firm muscles of his abdomen and chest. The strength and power under his skin lit up her nerves. She moved a stray hair away from his brow and focused on his eyes. Bottomless pools of blue, they reflected the pain hidden behind his features.
Her chest constricted. “Please, let me help you.”
His gaze fell to her mouth, and he reached up to stroke her bottom lip with his thumb, teasing her. “How? Like this?”
Before she could stop him, he slipped his hand around the base of her neck and pulled her close. His mouth hovered over hers for the briefest moment. She closed her eyes, aware that doing so was an invitation all its own. Warm and welcoming, his lips tasted of musk and pepper. With unexpected tenderness, he teased her with his tongue, caressing the crease between her lips. The sensitive nerves tingled at the contact and she inhaled, parting her mouth.
Moaning softly, he deepened the kiss, and explored her. His tongue brushed the sore spot in her mouth, but instead of pain, his smooth caress eased some of the ache. The passionate need in his kiss bore into her, sending a wave of desire to her core. Beneath the thin material of her shirt, her nipples peaked, and she couldn’t hide her reaction to him. A slow groan rumbled in his chest.

After finishing a rewarding career in finance and accounting, it was time for award-winning author Rosalie Redd to put away the spreadsheets and take out the word processor. She pens paranormal, science fiction, and fantasy romance in her office cave located in Oregon, where rain is just another excuse to keep writing.


Amazon author page: https://www.amazon.com/author/rosalieredd
Posted by Diane Burton at 5:00 AM

Nice excerpt, Rosalie! Always trust your pets instincts! Thanks for visiting with us and sharing your hero (I can understand your possessiveness!). I'm intrigued.

Great interview, Rosalie. What a hunk! So glad you visited today.

Thank you, Diane, for inviting me onto your blog. I’m so glad to be here! If anyone has any questions about me or any of my books, please ask away. I’m happy to answer.

Thanks for the warm welcome Nancy, Francesca, and Maureen! So nice to meet you!