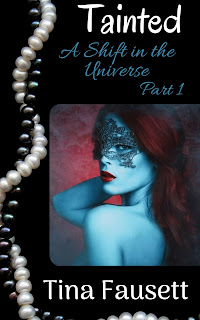 A jealous, malevolent wife hooked on prescription drugs, a husband caught between reality and carnal fantasies, and an angel cast from heaven, are all bound together by their hatred for one woman whose spells and manifestations catch them in a downward spiral towards hell...Gina Faulkner, thought to be a voodoo queen, owner of Swamp Witch Pickles in New Orleans, is the center of it all.

Bane Colton, dangerous and cocky, sees Gina at the French Market and the game is on. He makes up his mind he's going to break the feisty redhead with the infamous kinky reputation, body and soul. And Gina's ready to be a player, until Bane’s estranged and demented wife, Beverly, wants him back.

Enter enigmatic Darsh, known to many as the Angel of Death, who’s watched over Gina since she was fifteen and has loved her almost as much as he’s hated her. Now they would come face to face. He could save her from certain peril, but could never save her from herself. Would she destroy them all? At the very least, a shift in the universe was coming.

Excerpt:
“I had a love once that I never got over. I still dream about him, think of him, wonder if I’ll see him in heaven. No, it wasn’t your grandfather, Ian. I did love him. But sometimes there’s one person your soul meshes with so completely that you don’t care if you ever have sex because it’s worth a lifetime just to see them once in a while.” His grandmother looked off as if she were seeing someone in the distance. “Can you understand what I’m saying?” She turned back to him, her gaze penetrating.
“No,” he lied as tears stung the backs of his eyes.
“Sometimes, you love someone so much you almost hate them for it, for to hate someone you have to be capable of loving them. Who is it that you just lied about? Who is it that you hate?”
“No one, Grandmother…no one.”
“I’ve always felt sad for you, Ian, never having known what it’s like to be in love. But I see it in your eyes. You know what it’s like to be in hate.”
Darsh stood, walked to her, bent, and kissed her cheek. “No one is worthy of my hate,” he whispered.
“If you saw her today, the woman unworthy of your hate, what would you feel for her?” the old woman asked knowingly.
“Extreme dislike,” he answered, his eyes narrowing. “Now, if you’ll excuse me, I’ve got work to do before dinner.”
Darsh turned down the hallway towards the library. My world’s crumbling…I can’t keep going like this.. He ran his hands through his hair. It’s all finally catching up to me and soon nothing will be the same. A shift in the universe is coming and Gina Faulkner’s bound to be at the heart of it.

Check out the other stories in the series... 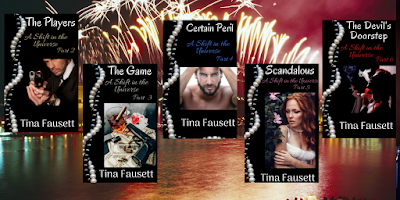 Link to other installments:
https://www.amazon.com/Tina-Fausett/e/B07FQ24FZ6/ref=dp_byline_cont_ebooks_1 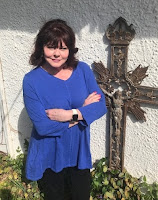 About the author:
Tina Fausett was born and raised in Oklahoma City and attended both the University of Central Oklahoma and Oklahoma University, majoring in History and English. She's a published poet and novelist, as well as an oil painter, historic home specialist. She's owned an antique store and art gallery and currently runs a company called Red Hot Mamma's Pickles in Oklahoma City where she lives in an historic neighborhood. She's lived in the Garden District in New Orleans, the city she loves, and tries to spend her time between the two cities. Tina has a daughter, son and granddaughter that are her main focus.

Email ThisBlogThis!Share to TwitterShare to FacebookShare to Pinterest
Labels: A Shift in the Universe series, Angel of Death, Angels, Tainted, Tina Faucett

I love this series, and you definitely don't want to miss out on the first one while it's free! Great post, Diane!

Interesting premise and a great cast of characters!

Love the cover and the excerpt!!! Congratulations!

Love your cover, and your excerpt is grabbing!

Welcome, Tina. Wishing you much luck with your new release. Come back and visit again. I, too, love the cover.