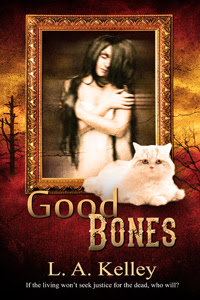 Good Bones is on sale now through May 8 for 99 cents at Amazon, Barnes & Noble, and Apple iBooks. Read an excerpt and the first chapter below.

The first time Detective Jake Sumner spied the old house, he sensed the good bones. Little did he know the purchase of the property included an unusual tenant far from resting in peace. Can the new psychologist in town help him treat a ghostly trauma case or is his growing attraction to Katherine Fleming best left buried?

With the aid of a mysterious white cat and a mystical mirror, Katherine and Jake join forces to solve a murder. Can they stop a killer from claiming the next victim or will their investigation only lead them six feet under?

Jake flicked on the light. Other than faded floral wallpaper, the single decoration on the walls was a large antique gilded mirror. The glass was old, dotted with hazy black splotches where the reflective silver coating had worn away. Katherine’s image was blurred and barely recognizable. She ran a finger over the window sill, and it came away covered in dust. “Your tenant is a lousy housekeeper. This room doesn’t seem as if anyone has been in here in years.”
“Yeah,” Jake murmured. “It’s not her thing.”
“I don’t understand,” said Katherine. “Where is she?” Without warning, the temperature plummeted. Katherine shivered, hugging her arms to her chest. “Why is it so cold?”
Jake’s lips pressed together in a thin, tight line. His gaze fixed on the mirror.
Click…click…click…click.
The lamp flicked on and off. Katherine’s pulse soared. “Detective?”
Jake glowered at the lamp, his face red with anger. He grabbed Katherine’s arm. “I’m sorry. I was wrong. I shouldn’t have brought you here—”
The French doors slammed shut. From outside came a muted thud as the front door closed as well. Katherine shrugged off Jake’s grip. “W-what are you doing? This isn’t funny.”
“It’s not me.” He peered at the mirror. “I’m sorry, Dr. Fleming. This is a bad idea. We should go now.”
Don’t leave me.
“W-who said that?” Katherine turned around to face the mirror. Her eyes widened in horror as the black splotches slid toward the center of the glass. “Trick.” Katherine clutched at her shirt. “It must be a trick.”
The blotches whirled together. A misty shape formed. Arms…legs…now torso…now head…an image of a person appeared from inside the gilded frame. Facial features blurred beyond recognition, but the body was definitely female. Katherine’s legs refused to move, a scream died on her lips. Shaking, she raised a trembling arm. Instead of mimicking her movement, the reflection remained rooted in place. “T-that’s not me.”
A plaintive whisper filled the air. Help.
A blast of frigid wind whipped the curtains and knocked Katherine into Jake. With the sound of breaking glass, a vaporous arm separated from the mirror and reached toward her.
Help me…
“Out now!” Jake dragged Katherine across the room. He yanked open the parlor doors and shoved her into the foyer.
Please…
The unearthly plea followed Katherine out of the house.
Pllleeeaaassseee…
Jake slammed the front door shut behind them. The muted cry faded away.

L. A. Kelley writes science fiction and fantasy adventures with humor, romance and a touch of sass. All her books are certified corona free.

Looks like a great story and a great sale!

Thanks for sharing your new release and sale. Wishing you much success.