I am so excited to share my latest release, Bait N' Witch. A witch takes a job as a nanny for the hunter after her. Hiding in plain sight has never been so...magical! 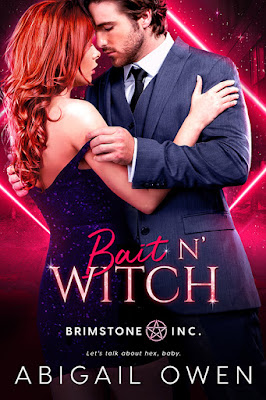 Rowan McAuliffe has been hiding most of her life. Secretly trained in her powers by an unusual source, she’d been taught not to trust anyone. Especially other witches. However, after she was forced to perform a hateful act against her will, she now hides from the Covens Syndicate and their judgement.
Greyson Masters is the Syndicate’s best hunter. On top of the danger of his job, Greyson is trying to raise his triplet daughters alone, budding new witches who display an alarming combined power no one understands. Too bad he doesn’t have a clue how to deal with them.
Until Rowan walks in and the chaos settles for the first time in…well, ever.
Little does Greyson realize that his new nanny is the very witch he is hunting, and she’s been hiding right under his nose this whole time.
BUY NOW

“If one is inclined to enjoy a steamy, paranormal, characterdriven tale with heart and humor then “Bait N’ Witch” delivers on all fronts!…Sprinkled with humor and a bit of mystery, this is one delicious romance that will satisfy even the most jaded of palates.”~InD’tale Magazine

***This novella was previously self published as a Legendary Consultants story, but has undergone a complete re-edit. Scenes were added, things were changed, but the kissing still remains!

A chuckle had snuck into his voice, a suspicious quiver hovering about his lips.
Kissable lips. Damnable lips.
Given how rarely he smiled, a contrary part of her wanted to press harder, see if she could really make him laugh.
“I don’t agree with everything you say and do. There’s a difference. So…now that you know I accept you, appreciate you even, you can go back to bed knowing I’m just like every other woman.” She waved toward the hallway.
But he didn’t leave. Instead, he reached out and wrapped a red curl around his finger. “Any other woman of my acquaintance would be begging me to kiss her right now.”
She snorted to cover her rising panic, because dammit, she did too. “Arrogant. How do you know that?”
He smiled, knowing and unrepentant. “And not one of those women makes me want to pull her up against my body every time she speaks.” His voice dropped lower, rasping on her overly sensitized nerves.
“I’m your children’s nanny.” Her resistance was crumbling in a pathetic heap around her feet, a house built on sand, but she had to try to stop this before it got out of hand. “That’s it.”
The words echoed inside a strange hollowness that suddenly filled her. Why did knowing all she could ever be to Greyson Masters was a temporary nanny feel like this? Empty. Aching. It made no damn sense. Two weeks and she was smitten. With him and his family. And that was a tragedy worth crying over.
He continued to stare down into her eyes, and desperation had her grasping for a solution—even a shock tactic to stop this, even as she longed for it. With a ragged breath, she curled a hand in his shirt, and tugged him closer. “Fine. Just kiss me and get it out of your system, Grey.”
Before he could say or do anything, she went up on tiptoe and placed her lips over his.
The kiss caught fire faster than a spark to dead wood. Grey groaned low in his throat, and aching need took over her body and her mind while he pulled her in close, searing her with the heat of his body. Desire throbbed through every part of her, heavy and thudding, leaving her beautifully tingly and on edge as she lost herself in what he was doing with his lips, his tongue, his hands.
She couldn’t have ended it even if she’d wanted to. Gods and goddesses, she’d just discovered what heaven felt like. Taking it away now would be like taking away a child’s birthday toy. The sexy stubble on his jaw rasped against her skin, and she reveled in the sensation wanting to press against him, rub her cheek to his. Grey was all man, and she wanted more.
With another groan, he pulled back, then stepped away, breathing hard, and the cool air that hit her in his absence was like being dunked in an ice bath.
He didn’t say anything for a long moment. Then he ran his hand through his hair, spiking it up even more than before, making her fingers itch to smooth it down for him. “I shouldn’t have done that.”
Pride and a fierce self-protective instinct kicked in. She tipped her chin up and gave him her best nothing big has happened here smile. Hopefully she managed to look amused and bored at the same time. “You didn’t. I did. Now that we got it out of the way, we can move on.”

BOOKS IN THIS SERIES

Brimstone Inc. is set in the same world as the Fire’s Edge & Inferno Rising series!

What a fabulous premise- looks like a great story. Congrats!

I love witch stories. Congrats on the new release.

I absolutely love the title!