A Haunting We Will Go . . . Road Trip! by Nancy Gideon 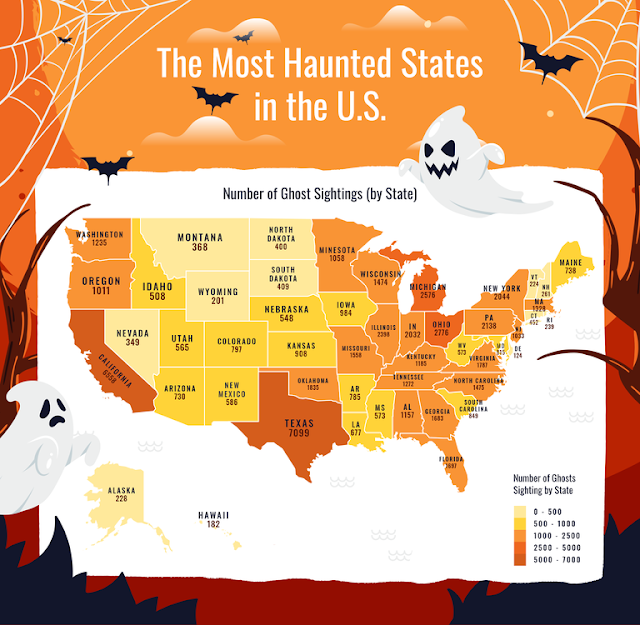 Are you rooted in the middle of Spook Central? Check the map above.
Haunt where you’re planted is not just a good idea but a paranormal rule (and the topic of last month’s post). It’s Halloween time, where natural (or supernatural!) laws supplant those of timidly shivering under the covers mankind. So, if you’re brave and bold, go where no sane (wo)man would go to find the biggest chills and thrills. Make it a field trip.

Being from Michigan, I’m proud to be in the fourth ranked state in the country for ghost sightings (having had my share very early on in the house I grew up in). But if you’re in one of the ectoplasmic dry states, here’s a guide to finding some spirited action: 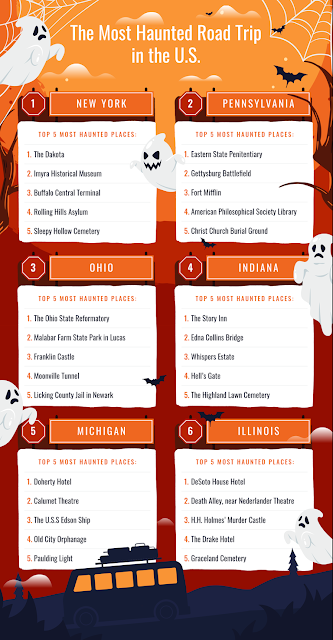 Being a devout coward, I have never felt the need to seek out my state’s haunted zones (though I’ve had opportunities at my oldest sister’s certified historic home). My motto: leave sleeping haunts lay . . . undisturbed. Don’t go poking around that things that might poke back!

How about you? Had any unexplained encounters? ‘Tis the haunting season!
♚♚♚♚♚
Nancy Gideon on the Web
Blog | Facebook | Twitter | Pinterest | Goodreads | Amazon
Goodreads “Nancy Gideon by Moonlight” group

I don't recognize any of those locations in Michigan. I really wouldn't try to find them, either. LOL Never had any "encounters" either. I've had strange dreams about deceased family members. Always makes me wonder if they are trying to make a connection.

Oh, wow! Loved this post and map, Nancy! I've had many encounters with those on the other side, but one of the most recent was several years ago at Highgate Cemetery in London. Our tour took us inside one of the large crypts. Immediately, I got a sensation of a spirit presence lingering near me. Usually, I put my shields up so I don't get pulled in. Yet I became intrigued by this man who was laughing at me. He wanted to follow me out of the crypt. He had an alluring charm, but I felt no fear. I ignored him as I slowly made my way out of there. As I paused at the entrance, I bid him farewell and told him his place was here. And I wasn't the only person who felt the "others". One woman went white and ran out of the crypt.

Wow- pretty cool! Guess living in PA- has me up there on the list.

Geez, Mary! I would have slowly backed away and RUN! I've been in several places where I've gotten all prickly but I'm not one that goes looking for trouble. New Orleans is one of those spots where my guard is always up - ever since one of my friends brought home a "hitchhiker." I've been in several old houses (my sister's included) where I just can't relax.

Di, the old city orphanage up by Traverse City is one of the creepiest places on earth. Elizabeth tried to get me to go in but just driving around it had me all goosebumped and unsettled. Definitely some bad vibes there. One of the old houses in Nashville we toured just from the outside did the same. Couldn't wait to get away from there. And one of the old houses in Kzoo where an old boyfriend rented . . . just NO. I tend to go with those feelings.

I'm in Southwestern Ontario, but we seem to be surrounded by high haunted areas in the US. I have seen the ghost of a cat, but that's it for me. One of our cats and I were sitting on my bed. Another cat came into my room and ran under the bed. The cat on my bed jumped off and looked under the bed. I did, too. But, there was nothing under my bed. All our other cats were outside on their leashes. I have no desire to meet any ghosts of people, but I have felt presences in certain places.

I'm not in a hurry for something to walk up and say "Howdy!" either. I'd rather make up a story than relay an experience.