Wow the 4th has come and gone! Summer is moving way, way too fast for me because I love the heat—sweat and all. I even got the chance to enjoy having the holiday off coupled with a regular day off which doesn’t happen often in my working life. But, stupidly, I made an appointment for 7am this morning so had to get up at 6. DUH! Somehow I forgot I could stay in the cat cave for 2 whole uninterrupted days!! *sigh* Today I’m going to leave you with a piece of QUENCH, coming soon…
If you dare enter this cat’s lair, you’ll give more than blood! 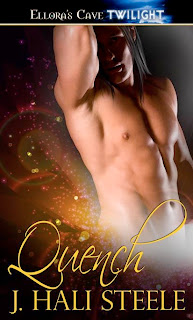 Alek Foress is cursed. A tiger and lion mix, he’s also infected with the vampyre bloodlust. He refuses to take a female mate fearing she’ll uncover his secret, carnal need for his prince. Then he meets Viviana, the one woman who ignites a fierce fire in his soul. She makes both cats purr with desire, and the vamp in him salivates for her blood.
Viviana, a warrior, comes face-to-face with the only creature that can turn her cold blood into a molten river. Her powers stolen, she has to count on him for everything—blood, and even her life. She becomes a wildcat in his arms, and not even royalty will stand in her way when her mind’s made up. Viv wants Alek no matter what, she’ll show him how to quench his thirst.

Sounds awesome!! Not the getting up early, the book!