The Mercy Moon: When and Where? 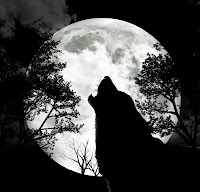 Last month, we talked about the characters in our "novel in development", The Mercy Moon, so this month we're turning to the setting. While The Mercy Moon is set in today's world, it's definitely today's world with a great big twist: werewolves are real (which isn't much of a stretch for readers of this blog, who are used to seeing vampires, werewolves, demons, and the like).

These werewolves have their own culture and hierarchy, and their contact with the human world is limited. There are six clans ruled over by the wolf king, and each has their own leader. To be alpha is both a trait and a role, and the king is the most alpha of all—something that will surely cause problems for Audamar and Soren.

Generally, there is no shame in being omega. However, taking on the status of omega in punishment isn't unheard of. To be in disgrace (in ungnade) and forced to take on the role of omega is a difficult position to be in.

And that's going to cause problems for Audamar and Soren too…

Anah Crow and Dianne Fox write sci-fi, paranormal, and contemporary queer romance for Carina Press, Samhain Publishing, and Amber Allure. They’ve been writing together for more than 10 years. You can find them on the web at anahcrowdiannefox.com and on Twitter at @anahcrow and @diannefox.