As a young girl, I read romance novels voraciously, mostly gothic. As I got older, I went for things that were a little darker, but I still wanted the romance. Looking back, there are five authors whose books made a big impression on me as I began to write my own novels.

The first, probably on many paranormal romantic authors’ lists of influences, is Anne Rice. She may even be the mother of the modern paranormal genre. The tortured vampires of the Vampire Chronicles were inhumanly beautiful and more than a little homoerotic, and definitely appealed to my darker side while still feeding my romantic side.

After Rice, I discovered Tanith Lee’s Blood Opera sequence, Dark Dance, Personal Darkness, and Darkness, I. These books were seriously dark, as you might guess from the titles. ;) The paranormal creatures in this world were called the Scarabae, an ancient race who are inhumanly beautiful, extremely long-lived and powerful, and into some rather twisted romantic liaisons.

Then came Storm Constantine’s Wraeththu. The Wraeththu aren’t exactly paranormal. They’re more extra-human. Constantine’s vision of hermaphroditic evolution in a post-apocalyptic world is decidedly romantic and leans toward the homoerotic, as her “har” are all the result of human male evolution into an androgynous, more perfect being. Like Rice and Lee, Constantine writes of beautiful, romantic creatures with superhuman grace and power. And gorgeous long hair.

After reading the Wraeththu books, I picked up Laurell K. Hamilton’s Anita Blake series, which was deliciously dark, and full of gorgeous superhuman men—most with long hair, which seems to be a theme for me—vampires, werewolves and werecats. I admit, I didn’t stick with the series, but I enjoyed the dark romantic thread for the first several installments. In many ways, these were groundbreaking books that paved the way for the entire PNR genre.

And finally, Jacqueline Carey’s Kushiel’s Legacy series had a strong impact on my writing, both in a technical sense as I studied how she wrote with such a compelling voice, as well as allowing me to feel free to write some of the racier things in fantasy I wasn’t sure before reading her that I would be able to get away with. Again, her characters aren’t precisely paranormal, but they are said to be descended of angels, giving them an inhuman beauty and a penchant for sexual magic.

Carey also gave me “permission” to admit to myself that I was writing romance. For a long time, I tried to keep the romance out of my fantastic worlds, thinking it wasn’t acceptable to mix the two, and that my writing wouldn’t be taken seriously. But after reading Kushiel’s Dart, there was no doubt in my mind that fantasy and romance belonged together.

I took that lesson to heart, along with the permission to write "racier" (to put it mildly), when writing my latest series, Demons of Elysium.

Book 2, King of Thieves, will be out at the end of this month. Available for pre-order at Amazon, B&N, Kobo, and Samhain Publishing. 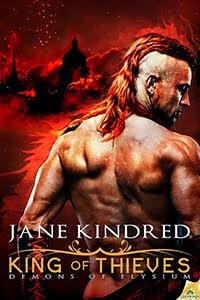 “Kindred does a splendid job of balancing the decadent romance with an engaging conflict filled with lust, lies and revelations.” ★★★★ — RT Book Reviews Magazine

There are worse things to lose than one’s good name.

Belphagor can seduce demons with a look and bring angels to their knees with a single motion, but when it comes to being in love, the Prince of Tricks is out of his element.

At every turn, Vasily rebels against the discipline he claims to want, even refusing to use his safe word. But when Belphagor uses a scheme to shut down an underage brothel to test Vasily’s limits, he loses Vasily’s trust along with the boys he intended to set free.

Uncovering a smuggling ring that spans two worlds, Belphagor calls on a team of Nephilim mercenaries to rescue the “Lost Boys” from earthly gangsters. But his relationship seems beyond repair—and a heartbroken Vasily beyond his reach in the arms of a sensual demon named Silk.
Belphagor has more than enough grand schemes up his sleeve to bring down the smuggling ring for good. But when it comes to putting things right with Vasily, his bag of tricks is empty. Except for trust…and a plan to teach his boy a lesson neither will soon forget.

Warning: Contains two strong-willed lovers who will test the theory that without air, there can be no fire. Expect plenty of smoke, more than a few mirrors, and an old-fashioned Russian duel. You may need a shot of vodka when you’re done reading this one!