Write What You Know

Write What You Know or Some Reasonable Facsimile


In honor of this being November 1st....the first day of NaNoWriMo (National November Writing Month) where you write a novel in a month, I thought I'd give a little tip to help you through the month.

“Write what you know.” 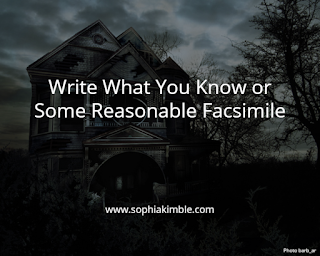 You’ve probably heard that before if you’ve read anything on how to write a novel. I know I had when I opened my first document and stared at the blank page before me, pondering what I would write. But quite frankly, I like to think I know a lot of stuff, so just what was I going to write about?

I’ve always had a love of the paranormal, both in reading and real life. I soak up those shows on the supernatural like a dehydrated woman with a glass of water in the Saharan Desert. I pour through novels with any kind of spookiness going on, so I knew I wanted to write about something otherworldly, but what?

While the majority of people have not experienced anything of the supernatural variety, they have seen, read, or heard of stories that happened to someone. Even if you haven’t personally experienced anything, somewhere in your subconscious is an experience, either real or imagined, you can tweak, change, and alter to make your own.

Have you ever been scared because you heard strange clunks and bangs upstairs that had no apparent source? Like the time it sounded like my cat was jumping from the counter onto the hardwood, except she was curled up next to me. Was there a logical explanation for the strange noises? Probably. It was only one degree outside, so my rational brain tells my spooky side it’s the difference in the heat of the house and the cold outside causing the house to make these noises, but… 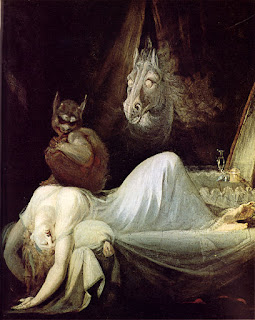 The prone to Stephen King-ism side of me, was already turning it into a scene in my next book.

I think when all those people tell a writer to “write what you know” they don’t necessarily mean write things exactly as you know them. Draw on your experiences:

*How you felt when you heard that inexplicable noise. (Frozen in place, gaze glued to the ceiling, listening intently for any other strange noises, checking to see if the cat is concerned.)

*What your body did when you watched that slasher movie when the soundtrack ratcheted up to DEFCON one as the stupid girl just had to look under the bed and you knew something bad would happen. (Pulled the blanket up to your chin, knees drawn up to your chest, heart pounding.)

* What happened after you read that Stephen King novel. (Avoided stepping on the drain in the shower for months, looked into storm drains while walking down the street, and developed an irrational fear of clowns.)

*How you reacted when you were alone in the house and felt someone watching you. (Goosebumps raced across your skin, your throat tightened and you imagined ghost-like fingers wrapped around your neck, squeezing if you turned around.)

You get the idea. Take all the experiences and remember how you felt, what your body did physically, how it affected you long term. Weave these traits and reactions into your characters. This will make them fully realized, three dimensional characters that readers can relate to because they’ve also either personally experienced something paranormal/strange or have done it via proxy (movies, books, ect.) and they’ll remember what they felt.

Cheat them of this whole experience through your characters and they won’t be very forgiving.

If you write otherworldly novels, be sure to give the reader WHAT THEY KNOW and they’ll love you for it, and keep coming back for more.

But remember, whatever you do, write something...it can always be tweaked, added to, changed later.

Great post, Sophia! Kind of like write what you love- since I write a lot about magic, paranormal and witchcraft but as of yet I cannot fly on a broom, cast a spell or anything even remotely close, lol.

Wow, Sophia! Terrific post. I was doing fine until you started to tell how you felt & how your body reacted when paranormal things happened. You freaked me out! Good job.

For you and anyone else doing NaNo, good luck!

I really enjoyed your post. It was inspirational not only to get busy and finish my novel. I've also loved the paranormal I too have heard those unexplained noises.