A Deal too H.O.T. to Handle by Nancy Gideon #PNR #Paranormal #BookDeals 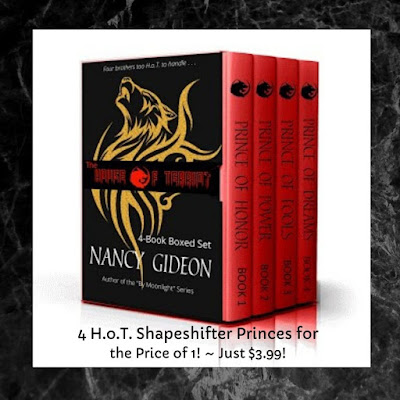 While quarantined for these last few months, I decided to give myself . . . and my readers . . . a special gift for my birthday (since it’s a BIG one)! What could be better than four books for the price of one as a lead-in to the last book of my By Moonlight dark shapeshifter series?! Not only will this bring new readers up to speed in my world, as a bonus to me, while proofing those four stories, I discovered several more plot points that needed to be tied up in a bow in RISE BY MOONLIGHT. Win-Win!

My By Moonlight series was conceived well over a decade ago. What started as a stand-alone paranormal book for one contemporary publisher that considered it too dark as is, evolved into a 15-book series begun in 2010 with MASKED BY MOONLIGHT at a different house with books both traditionally and Indie published, and concludes with RISE BY MOONLIGHT in July 2020. It’s been a labor of love from start to finish. 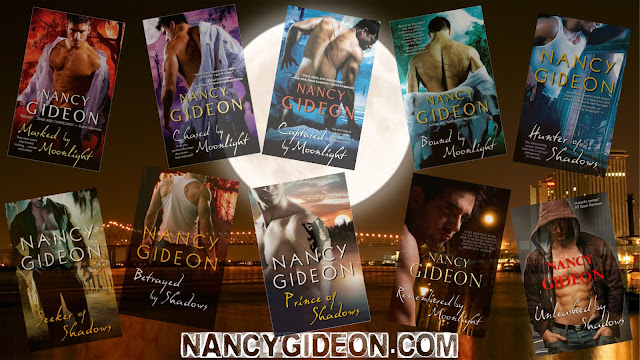 The House of Terriot books were an unofficial 4-book spin-off that continued many of the main plotlines while developing their own mini-world as a rival clan. Technically, they’re still in the over-arc of the By Moonlight series. After introducing Cale Terriot as a dark hero in PRINCE OF SHADOWS, I’d been eager to get up close and very personal with his divided and dangerous brothers as the clan’s crown was unexpectedly up for bid. And the more I got to know them, the more I realized they needed their own stories.

It’s with great pleasure that I give these renegade wild boys their own special treatment prior to the series end with the HOUSE OF TERRIOT 4-book boxed set. The official release date is May 27 (Happy birthday to me!!) but is now available for preorders. 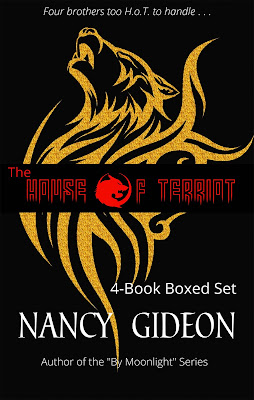 Picturing the sleekly dangerous Terriots in the bar that night they were introduced, her brave front faltered. She’d felt an instinctive warning. They weren’t what they seemed. There was something . . . off about them. In the way they acted, the way they instinctively moved as a synchronized unit. The way they exuded power both physically and mentally. That “more” she didn’t understand but didn’t fear enough to stay away.

Wolves. That’s what he and his brothers had made her think of that first time she’d seen them together, bumping, teasing, growling in the pack-like camaraderie of those tribal spirit animals. Strong, beautiful, deadly predators . . . not domesticated pets. (from PRINCE OF DREAMS)

Though there won’t be the usual parades or huge family picnics today, remember to fly your flags if you’re here in the U.S. to honor those who gave all for the freedoms we enjoy and can’t wait to return to after our restrictions are lifted. Until then . . . Stay Safe and Stay at Home with a good book (or four-in-one!).

I loved the House of Terriot books. Though brothers, they are each so different. How wonderful they're in a boxed set for those who haven't read them. Early birthday wishes for you, my friend. Enjoy the rest of this weekend.

Thanks, Di! Got a Zoom meeting with my critique group this afternoon to get me back on the writing track! What could be better!

Happy early birthday! Thank you for letting us share in the celebration!