My husband and I are in Scotland while I research settings for the second book of my Ancient Magic paranormal suspense series. What a marvelous excuse to get to know the country of my origin!

Day 1: Inverness
Despite being jet-lagged, we enjoyed our stay in the Palace Hotel, right across the street from Inverness Castle.


We had tea while gazing out the window of our room at this amazing view of the Ness River and Inverness Castle. Thank you, Paul, for asking for a “castle view” upgrade, it was worth it.

Inverness is a pedestrian-friendly city. It includes a lovely two-hour waterside walk that follows the river south and then crosses to the opposite bank via a couple of islands. While we didn’t have time to do that whole path, we strolled around the city center and shopped. I found my Campbell clan tartan and bought cashmere scarves for family members (my buying splurge for the trip), as well as a traditional sgian-dubh, the ceremonial knife that’s
part of traditional Scottish Highland dress. If you have any friends who wear kilts, you know the clansmen usually wear their knife tucked into the top of their kilt hosiery. However, I plan to use mine as a ritual athame.

We had dinner at a little Italian restaurant down the street for our hotel, where I discovered a new favorite wine, Primitivo Del Salento Caleo. I would recommend both the restaurant and the wine.
My only regret is that we could not visit the Inverness Highlands Family Archives to research my Campbell clan family roots. It wasn’t open on Sunday, and we had an early-morning tour scheduled the next day. I do intend to contact them for research assistance when we get home.

Day 2: Outlander Tour
We met Diana Bertoldi, our Tours By Locals guide, and were delighted to discover we were her only customers for the day. She told us she’d lived in Italy before moving to Scotland. While her son still lives in Milan, Diana considers Scotland her true home.

Our first stop was the Culloden Battlefield, one of the most important places in Scottish history. It’s managed by the National Trust of Scotland and has an informative visitor centre. However, Diana worked at the site previously, so she gave us a vivid account of the final battle in the Jacobite Uprising.

At Culloden), the Jacobites (mostly Scottish clansmen) lost 2,000 men, while the British suffered a mere 300 causalities.  The Duke of Cumberland’s dragoons (think of the Outlander character Jonathan “Black Jack” Randall) chased fleeing Jacobite clansmen into the Western Highlands, executing many of those they caught. The Scottish massacre was so complete that the Culloden burial sites are marked by clans, not individuals.

Those clansmen who were not executed were often transported to the colonies, ushering in the first wave of large-scale Scottish immigration to North America. The British government also banned the tartan and kilt. The clan system—the social order that had existed in the Scottish Highlands since before the days of William Wallace—was lost to history.

Although the clan way of life was formally eliminated, their sense of national pride was not.  In 2014, Scotland issued a referendum on national independence. That, coupled with the release of Diana Gabaldon’s Starz television drama, Outlander, has sparked renewed interest in Scotland’s Jacobite Rebellion. The efforts of Bonnie Prince Charlie and the Highlanders mark one of the most important—and ultimately tragic—moments in Scottish history.

Our wonderful guide Diana had arranged for us to meet the current McKenzie Clan Chief, Laird John Ruaridh Grant MacKenzie. 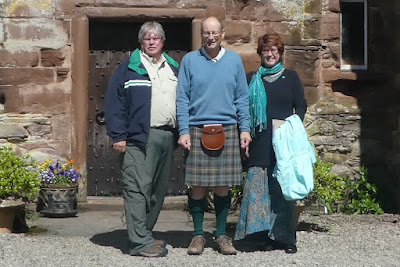 We spent a delightful couple of hours visiting with him and touring his home, Castle Leod. We shared a dram of whiskey, while he gave us the background of the castle and all the family portraits.

The relative most interesting to me was George, the 1st Earl of Cromartie. A friend of Sir Isaac Newton and an ardent alchemist, he spoke five languages and was against the burning of witches. A truly modern man!  His father Sir John, owned Staten Island for a time, but sold it on account of “too many Indians and mosquitos.”

He also showed us the giant chestnut tree on the back grounds, planted by Mary Queen of Scots’ mother, as well as the only redwood tree in Scotland, along the front drive.

When she learned I was researching sacred sites for my book, Diana took us to the Corrimony Cairns.
Sitting in a grassy field surrounded by sheep and bordered by a small stream, the 4000-year-old burial cairn and the standing stones ringing it are still intact. We had the place completely to ourselves, so Diana gave me no information, just instructed me to walk the perimeter and then let her know what I felt, if anything

I walked two-thirds of the way around the stones, feeling like they were repelling me. As I rounded the back of the cairn to complete my circle, it felt the opposite: the stones were pulling me toward them. When I told Diana what I’d experienced, she explained that an energetic ley line ran through the site, roughly along the line where I’d begun to feel attracted!

That was my first experience with the supernatural Scottish highlands. It wouldn’t be my last, as we had two full weeks of sacred sites to visit with our next tour group, Gothic Tours.
If you would like to read more about sacred sites in the Scotland Highlands, visit my continuing blog at www.writerSandy.com. I live in Arizona with my husband, a super-smart Border Collie/Aussie mix named Teak, and two huge black panther cats (18 pounds each), named Salem and Shadow Moon. Their daddy, Magick, was even bigger! He's featured in my debut novel, Song of the Ancients, the first book in my paranormal suspense series, Ancient Magic.
They say write what you know, and I'm Wiccan, so my debut novel involves witchcraft and Native American medicine magic. It's set in the energy-laden town of Sedona, Arizona.  It was interesting to introduce the concept of witchcraft, seen through the eyes of an ordinary, non-magical woman, and go through her reactions and disbelief along with her. While I did a lot of research for this book, most of the magical stuff I drew from my own Wiccan background and practice.
Sedona is but one earth "power site" in the world. The Ancient Magic series will take Samantha and Nicholas, as well as a few secondary characters, to adventures at other sacred sites. The second book, Stones of the Ancients, will take us to the ancient standing stones of Scotland, where I get to trace my own heritage while researching the book. The series continues to Hawaii to learn about Pele, the Goddess of fire and volcanos. The last book will be set somewhere along the ancient icy land bridge of the First People, maybe Newfoundland, Alaska or Siberia.
Book One – Song of the Ancients is available now on Amazon, in both print and ebook.
Book Two, Stones of the Ancients, will be available early 2018.

Sandy, what a treat. I loved reading about your trip and plan to read more on your blog. Hubs' grandfather was born in Scotland, so we've always wanted to visit. I hope you'll learn more about your ancestors and how they came to America. The part about the cairn was eerie and fascinating. I hope you'll write more about how this trip influences your stories.

Diane,
I will be writing a LOT more about Scotland. The next book in my Ancient Magic series will be set at one of the sites we visited...but I'm not telling exactly which one yet!

I'm Campbell Clan, btw. Do you know your Grandfather's history?

Wow, thanks for sharing part of your trip, Sandy! Scotland is definitely on my bucket list (hopefully sooner than later). Loved all the pictures and details, and now I'm even more excited to travel there. :)

Wow- what an awesome way to research a story. Thank you for sharing about your trip!