Though none of the cowboy stories in our anthology The Cowboys of Clark’s Folly has any Native Americans, Texas was home to hundreds of tribes of American Indians. I’ll only name and discuss a few, living around the location in Texas where our fictional town, Clark’s Folly, would be.


Apache
The Apaches dominated almost all of West Texas and ranged over a wide area from Arkansas to Arizona. Two groups of Apaches, the Lipans and the Mescalaros, were of primary importance in Texas. Apaches were among the first Indians to learn to ride horses and lived a nomadic existence following the buffalo.
Biloxi
The Biloxis gave their name to the area around Biloxi, Mississippi, where they first encountered European explorers. They began to migrate westward in the 1760s to avoid white interference. By 1828, a group had settled along the Neches River in present-day Angelina County. The Biloxies became allies of the Cherokees and were caught up in the violence in 1839 that drove the Cherokees out of Texas.
Cherokee
The Cherokees were one of the principal Indian nations of the southeastern United States. Wars, epidemics, and food shortages caused many Cherokees to migrate west to Missouri, Arkansas, and Texas in hopes of preserving their traditional way of life. Those who remained behind in the Southeast were eventually removed forcibly to Indian Territory (Oklahoma) in the incident known as the “Trail of Tears.”
Cherokees settled in Texas near the Red River. Pressed further south by American settlement, in 1820 about sixty families under Chief Bowl (Duwali) settled in Rusk County near the Caddos. As Americans settled that area, distrust grew between them and the Cherokees. Hoping to gain a legal title to their land, the Cherokees invested a great deal of energy in cultivating a relationship with Mexico. Hoping to protect this relationship, they remained neutral between Texas and Mexico during the Texas Revolution.
Comanche
The Comanches dominated a vast area of North, Central, and West Texas. There were at least thirteen active bands of Comanches, with five playing prominent roles in Texas history. These unparalleled horsemen led a nomadic lifestyle following the buffalo. They controlled trade in produce, buffalo products, horses, and captives throughout their domain. In the 1700s, the Comanches made their presence known in Texas by warring with the Apaches and the Spanish. Fearing that they would lose Texas to the Comanches, the Spanish negotiated a peace treaty with them in 1785. When the Spanish were unable to keep their promises in trade goods and gifts, Comanche raiding against the Spanish resumed, with many of the stolen horses being traded to newly arrived Americans.
There is also mention of the Cheyenne and who could forget the Kickapoo Indians? 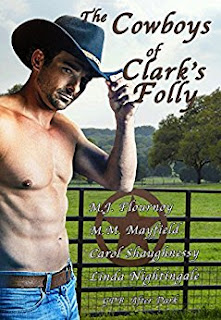 The Cowboys of Clarks Folly is an anthology of four stories of love and romance in the Lone Star State.  Interestingly enough, three of the authors are from Georiga—MM Mayfield, MJ Flournoy and Carol Shaughnessy.  I’m a transplanted Texan, originally from South Carolina.  The settings are interesting seen from different views of the landscape of Texas.
http://a.co/9Xh9QI5
Posted by Nightingale at 9:39 AM

Fascinating info. I never heard of the Biloxi nation. Best wishes on the anthology.

Thanks for stopping by, Diane and Maureen!

Loved your info on Native Americans. Thanks for sharing.