Did you have a good weekend? Did you celebrate Independence Day (July 4th) or Canada Day (July 1st)?

I grew up in a Detroit suburb, so Canada didn’t seem like a separate country. They spoke English, the signs were in English. (Only later, the signs were in French, too.) We easily drove across the Ambassador Bridge or through the tunnel where we were asked a few questions, like how long are you staying, where are you going? (This was all pre-9/11.) My sisters and I often went shopping for the day. In fact, I got my wedding crystal in a china shop there.

This time of year, our family often drove over to Windsor for the fireworks that took place on the Detroit River as a joint celebration. 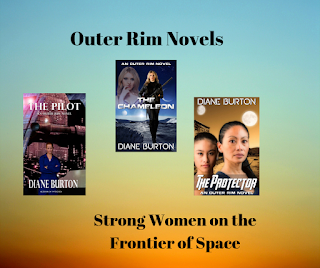 In writing science fiction stories, I need to figure out how the worlds in which my characters lived are governed. I’m sort of a pantser. I get an idea, and I start writing. I keep writing until something stops me, and I have to plot or need to do research or figure out where in the universe I am.

When I wrote the first book in the Outer Rim series, The Pilot, I had a lot to figure out: where does the story take place; if it’s a planet, where is that planet in relation to others; are those planets connected by a government; what type, etc. How important is that? Does it affect the characters? Once I worked all that out for the first book, the others came much easier—one of the reasons I love writing series.

The author usually knows much more than s/he puts in the book. Think of an iceberg. The story only contains that which appears above the waterline, whereas the author knows everything.

In the Outer Rim series, the stories take place, mostly, out on the frontier of space. This is what I write at the beginning of each book in the series:

The Rim is the home of stout-hearted individuals. Pioneers eager to make their fortunes. Nonconformists who want to be left alone. Escapees from the establishment or from the law. People who reinvent themselves with new names and life histories. From primitive settlements to established colonies to cities, the Rim is the place of fantasies and dreams.

As the writer, I needed to know how that government worked. My readers only needed to know what affected the characters. In The Pilot, the male protagonist’s (Trevarr) mother is the president of the Coalition of Planets. When that fact is revealed, I didn’t need to give a history lesson on the Central Government. Readers know what a president is. That was enough, at that time in the story. Later, I alluded to the fact that his father had been Chief Representative. That tells the reader the Coalition of Planets were ruled by a representative government with a president. Again, that was enough.

I knew more, of course, but I try to be scarce with details that smart readers can figure out. As the occasion warrants, I dribble out enough details so my readers aren’t lost, and not too much that their eyes glaze over.

In an ironic twist to what I just wrote, my middle grade science fiction adventure, Rescuing Mara's Father, begins in school with a lecture on different forms of government. The female protagonist, Mara, is bored out of her mind and shows it. 😊

A government is only one small part of world building. Have fun developing your world.

When I read about the Rim, I can't help but see and hear Malcolm Reynolds from Firefly. "We aim to misbehave." LOVE your world building. From the slanguage to the settings, it pulls the reader in effortlessly.

Thanks, Nancy. I love Firefly. Mal's cargo ship gave me ideas for Celara's ship in The Pilot.

I love your process for world building. I think the process is much more difficult in science fiction! Mine usually take place in a small town or a city I'm familiar with- so much easier for me! :)

Great insights into all the factors that can go into world building- and love hearing about you personal experience with this.

Thanks, Darcy. I agree about how much easier world building is with contemporary fiction. My mystery series is the same--small town that I'm familiar with. Still, we have to build that town so our readers feel grounded.

Thanks, Maureen. The government is a small part of the world building.

I lived in Blenheim, Ontario for a short time, and we would take trips to Detroit. Or come through the tunnel on our way from SC to see my folks. Good article for others who write the otherworldly. Not Detroit or Windsor, haha. Government. Your other world needs government.

I admire people who can create worlds for their characters when I have enough of a time staying focused in this one LOL!

Thanks, Linda. I never liked the tunnel. We were stuck in it for over an hour after a fireworks show trying to get back to the U.S. That close to the wall you can see water seeping between the tiles. Scary!

Pam, I had to laugh at your comment. The good thing about imagining a world is you get to make the rules. LOL

Thanks for the advice, Diane. good to know how much to put in after all that research and conjuring. All the best, Annette

Thanks, Annette. We gather all that info, research, etc. and it seems like we should use it all. It's hard not to. LOL

I laughed out loud at Mara's boredom. I remember that class! Ironic now considering how much research I've done about our current government and how things really work. Love your world building and it had me instantly thinking about the world I've been mentally toying with for several years. Interesting how important gov't is and becomes in our worlds. Great blog!

I love the worlds you create. It's amazing. Your writing always puts good pictures in my head.

Love this article, Diane! Especially your comment about doling out "scarce details" concerning your world building. That's something I strive to do as well. Don't want the reader's eyes to glaze over or worse, loose interest!

So many Sci-fi writers here. Of course, government is often a factor in all genres, so very helpful. Thanks for sharing.