So, last week I told you guys about being blindsided the first time I watched True Blood, how I was reminded of one of my characters. That it's only happened twice to me so far in my writing life. And I promised I'd tell you about the other one this week. So...
Shortly after I wrote Flash of Dark, I was struck with the idea for a science fiction story. Not unusual, I love science fiction. So the idea for a science fiction romance coming from me isn't so far-fetched. It was a shorter story than what I usually put out, but I was struck with the idea of a three book arc about a female pilot and the man she loved. Only, he wasn't the greatest of role models. In fact, he was an anti-hero (um...I have a thing for those if you don't know that by now). So I worked out this story idea, worked out the kinks (sometimes literally *cough*) and finished it up before returning to my vampires.
Then, in June of 2009, my husband and I went to the movies to see Terminator: Salvation. Why hello, Wallace (Wallace is the hero (of sorts) in my first science fiction romance, Midnight's Ghost). 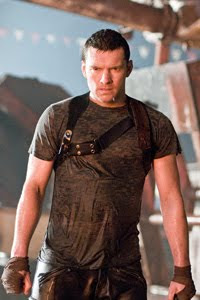 Yup, Sam Worthington (as Marcus Wright here) slapped me upside the head. Not that I'm complaining in the least!
Posted by Sara Brookes at 12:05 AM

Sam Worthington gets me every time and I am obsessed with Terminator. Have you ever read the Charliane Harris books?

I love that movie and he was really good in it.
Sue B

Yum, is all I've got to say. I still have to see the last Termintor move--but because of him--I will!!

@ Rebecca I have read the Charliane Harris books, or at least some of them. I have one sitting in my TBR stack and it's not even the most recent. I'm just a wee bit behind in my reading.

@ Sue I thought he did a great job!