Although I've revealed this cover already on my blog, pain issues are preventing me from coming up with a more substantive post tonight, so please forgive the shameless promo. ;) 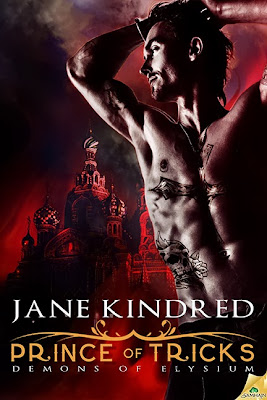 When desire rises, angels will fall. One, by one, by one…

Over the past century, Belphagor has made a name for himself in Heaven’s Demon District as a cardsharp, thief, and charming rogue.

Though the airspirit is content with his own company, he enjoys applying the sweet sting of discipline to a willing backside. Angel, demon, even the occasional human. He’s not particular. Until a hotheaded young firespirit steals his purse—and his heart. Now he’s not sure who owns whom.

A former rent boy and cutpurse from the streets of Raqia, Vasily has never felt safer than in the arms—and at the feet—of the Prince of Tricks. He’s just not sure if Belphagor returns those feelings. There’s only one way to find out, but using a handsome, angelic duke to stir Belphagor’s jealousy backfires on them both.

When the duke frames Vasily for an attempted assassination as part of a revolutionary conspiracy, Belphagor will do whatever it takes to clear his boy’s name and expose the real traitor. Because for the first time in his life, the Prince of Tricks has something to lose.

No pre-order links yet, but you can add it to your Goodreads to-read list. :)

Love the cover and the description both!