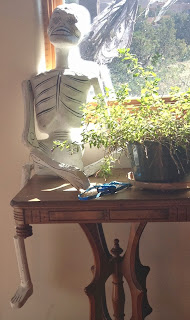 One of the things I love best about Halloween is getting my decorations out. They bring a different feel to the house, reminding me of the dark and dangerous time of the year. As you can see, both indoors and out, my taste is for scary and unsettling. 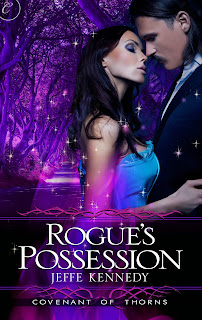 For me, it's the same with the fae I write about.In my mind, fairies aren't cute, goggle-eyed Disney sprites. No, they're much more frightening than that.

I knew that about myself, but hadn't thought about it in some time until I did an interview yesterday about my Covenant of Thorns series. The gal who interviewed me, A.J. Larrieu, who blogs at Paranormal Unbound, asked me a lot of very interesting questions about my world-building and what kind of reading went into it. Usually I respond with a fairly short answer about the fact that I've been reading fairy tales all my life. Something about A.J.'s phrasing, however, made me recall that I had made a concerted effort when drafting the first book to locate and read a particular kind of tale.

In short, I looked for the oldest stories I could find, the ones without happy endings.

See, the whole idea of the "fairy tale ending" is really a fairly recent development. Disneyesque to some extent, yes, but also before that. Before the stories were cleaned up for children, before the Catholic Church co-opted them to show the triumph of Christianity, these tales rarely ended well for the humans. The fae much more resemble demonic creatures than the short-skirted and sweet pixies of our modern era.

Now, to me, these traits aren't necessarily evil, but they are inhuman. That's the key. The fae operate on a totally different ethical system. My heroine, who is a scientist, records her observations about them. She keeps her notes in a book she ironically refers to as her "Big Book of Fairyland." In Rogue's Possession, each chapter begins with a quote from her notes. Here's one about fae morals.


Faerie operates on a sliding scale of moral ambiguity. The Golden Rule is turned inside out to become “When others do unto you, weigh the cost to yourself and charge accordingly.”

Jeffe Kennedy is an award-winning author with a writing career that spans decades. Her works include non-fiction, poetry, short fiction, and novels. She has been a Ucross Foundation Fellow, received the Wyoming Arts Council Fellowship for Poetry, and was awarded a Frank Nelson Doubleday Memorial Award. Her essays have appeared in many publications, including Redbook.

Jeffe can be found online at her website: JeffeKennedy.com, every Sunday at the popular Word Whores blog, on Facebook, and pretty much constantly on Twitter @jeffekennedy. She is represented by Pam van Hylckama Vlieg of Foreword Literary.
Posted by Jeffe Kennedy at 8:00 AM