My first published novel was Gemini Rising, winner of the Mainstream Category in the 2012 Preditors & Editors Poll.  That year, it was also 2nd in the Paranormal Romance Guild's Reviewer's Choice Awards.  However,

Gemini Rising is a controversial dark fantasy.  I didn't expect it to be published at all, but Canadian Publisher Double Dragon Publishing released it in 2012.  This year, I took my rights back and Class Act Books accepted the novel for reissue under the new title Anointing: The Gemini Factor.  I'm currently updating the manuscript for republication.

The story is told in a 'frame', starting in the present, the majority told in flashback, then returning to the present for the end.  This excerpt is from the present and is a celebration of Alina's husband's birthday.  The hero and heroine, Alain and Alina, are identical twins.  Male/female mono-zygotic twins are a scientific impossibility, but not in the suspension of disbelief, right? 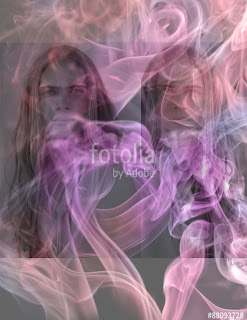 From Chapter 26 - Another Homecoming


An army of servants trooped across the lawn, their arms laden with brightly wrapped packages.  Mum motioned Rory to a chair center stage on the dais.  Alina stood behind him, her hands on his shoulders.  A young king, he smiled as they stacked the gifts around him [her husband].
With paper and ribbon littering the platform and the ground, Alain slipped into the shadows.  She’d give him ten minutes then signal the orchestra.  Her heart raced, but she mustn’t betray her excitement to Rory.  She kissed his cheek, stroked his hair.  At the soft thud of hooves on grass, she nodded at the conductor.
To Trumpet Voluntary, Alain strode the gamut of wicker torches.  Light gleamed on living gold.  Red ribbons fluttered on the stallion’s halter.  The palomino snorted, tossed his noble head.  His snowy mane flagged in the breeze.  A collective gasp rose from the crowd.
Every eye was on the dazzling pair—every eye but Rory’s.
She clasped his hand to her breast.  “Isn’t he beautiful?”
Her husband’s voice was ice.  “The man or the horse?”
Alina frowned a reprimand.  “Your birthday gift.”
A smile brightened Rory’s handsome face.  “Trust Alain to make a grand entrance.”
With a flick of his wrist, her brother halted the Lusitano stallion at the platform’s edge.  He bowed low, his hair sweeping the grass.  How regal the man and the horse were.  Alain in his tuxedo, the stallion’s golden palomino coat glistening in the torchlight.  Focused on Alain, the horse stood four-square, his ears flickering, nostrils flared.
Her brother straightened, shook his hair back from his face.  “Happy Birthday, Rory, from Lina and me.”
Her husband brushed a kiss to her lips, shot to his feet and bounced down the two stairs.
Alain smiled at her and handed Rory the lead.  “His name is Prospero.”
Rory wound his arms around the arched neck.  The stallion curled his head over the man’s shoulder, pressing him close to the warm scent of horseflesh.
Alina laughed.  “An equine hug.  See, he loves his master already.”
Rory turned, embraced Alain.  “Brother, you have outdone yourself.”
Alain beckoned, offering his hand.  “He was your wife’s idea.  Come, Lina, you must be first to mount him.”
Applause erupted.  The stallion danced to the end of the lead.  An anxious expression swept over Rory’s face.  Alain whispered to Prospero, and the horse stilled.  Alina stepped down into her brother’s arms.  A quick embrace, then she hoisted her skirt and Alain eased her astride the golden stallion.  Rory beamed up at her.
She smiled down at him and blew a kiss.  “I love you.”
Rory fisted the sky, the other hand clutching the horse’s lead.  “I love my wife,” he proclaimed to cheers.  With the same flamboyance, he spun on a heel and paraded his birthday present before his audience.
Alain walked beside Rory.  “Hold the lead tight and cluck.  He’ll piaffe.”
Alina stretched her arms beside her, threw her head back and laughed with joy as the stallion danced in place, his bare back swinging between her legs.
“Wow,” Rory breathed.
“Prospero is the reason I’ve been in Portugal for six months.  It took a long time to persuade the breeder to sell him.”  Alain stroked the muscles rippling under the stallion’s sleek hide.  “Good boy.”
“He’s magnificent.”  Rory clucked his tongue.  “But what will I do with a horse like this?”
Alain squeezed his shoulder.  “Learn to ride.  I’ll teach you, my friend.”
Alina closed her eyes, her body swaying to the two-beat rhythm.  Finally, they were together again, and she’d never allow anything to separate them.
_____________________

If you're not wary to venture into a story with a thread similar to Flowers in the Attic, look for Anointing: The Gemini Factor, a dark fantasy, coming from Class Act Books in October 2017.

The picture is a mock-up of a cover that is simply for example purposes.  The images behind the smoke will be different in the final cover.  The smoke image is from Fotolia.

Posted by Nightingale at 3:38 AM

Interesting concept--male/female identical twins. The cover is so intriguing, even if it's a mockup. Best wishes, Linda.