We concluded our Scotland trip last month by visiting two western islands, each magical in its own way.

The Isle of Skye is probably the most famous of all the islands in Scotland, and a popular place for the locals to vacation.  And then there was Iona, a tiny jewel in the crown of the Inner Hebrides, known as the seat of all religions worshiped in this country.

Skye has the greatest concentration of peaks in Britain, and the most challenging to climbers.

In fact, a common past time is called “Munro Bagging,” which consists of hillwalking/hiking to the top of all 282 Scottish summits over 3,000 feet. When you summit, you’ve bagged a Munro.

The beauty of wanting to bag all 282 is that in committing to do so, you open up the opportunity to see an incredible breadth of Scotland’s dramatic landscape, most of it away from the populated areas. Many of the Munros are located in Skye, so it’s a popular place for mountaineers.

Once you’ve bagged all the Munros, you’re considered a Munroist, and you start getting a lot of knowing nods, kudos and respect. Our laird friend, John McKenzie, told us he’d bagged the Munros when we visited him at the beginning of our trip, but I didn’t know just what an accomplishment that was until I saw the rugged landscape at Isle of Skye!

We took a relaxing hike to the magical Fairy Pools at the foot of the Black Cuillins, complete with stepping stone water crossings, and crystal clear, icy cold water for those who wanted to swim. 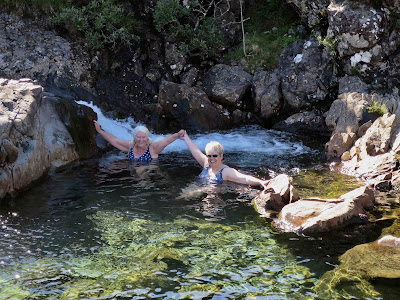 I put my feet in, and they were tingling with cold in less than 30 seconds, but two women in our party were much braver and actually swam!
We traveled next to sacred Iona. This little island is so small (only three miles long and one-and-a-half wide) that its ferry doesn’t transport cars and none are allowed on the island.  When we disembarked we had to haul ourselves and our luggage from the ferry to our hotel in a light drizzle. No worries, the village was enchanting and our cottage, the Finlay Ross, was warm, dry and welcoming.

One of several small islands off the western coast of Scotland, Iona can seem remote from mainland life. But in the old days when most people traveled by sea, Iona was central to life on the entire west coast.

It’s known as a ‘sacred isle’ because of its pagan and then Christian spiritual activity through the ages.  Persecuted druid priests came here for sanctuary to escape the persecution of Rome. Iona’s Gaelic name, Innis-nam Druidbneach  means ‘Island of the Druids. Unlike so many of the other western islands, however, Iona shows no trace of megalithic structures. This may indicate that the island was indeed considered sacred.

Iona feels old. The air, the ground, the contours of the land seem saturated with ancient memories. It’s said the island is made of quartz and marble, formed under vast heat and pressure when the first oceans were condensing on the blistering hot surface of the earth.  The land contains no fossils, for, as far as is known, no living creatures yet existed in the waters of this primeval land.

There is a Celtic saying that heaven and earth are only three feet apart, but in the thin places that distance is even smaller. The veil is definitely thin on Iona, and this ‘otherworld’ has a soft doorway, so everyone treads lightly.

The mystical druids were said to have founded a library here. But the displaced Irish priest, St. Columba, fought off the powerful druid elders in 563 AD to claim Iona as his own, and converted most of Scotland and northern England to Christianity.

Not much is left of St. Columba’s original compound, but there is part of a 13th century Nunnery and a beautiful abbey.

A lintel over one arched window on the Nunnery has a worn ancient carving of Sheela-na-Gig, a fertility Mother Goddess.

These ancient and crude fertility carvings used to be quite common around the world, but most of them have disintegrated over time. This is the first preserved one I've seen.

I found it interesting that it was mounted on the wall of a nunnery.

I spent an hour leafing through the bibles displayed inside the Abbey, collected from at least 80 different countries.

The Abbey Museum houses impressive remains from the early Celtic period, include 14-foot-tall crosses dating from the middle or late 8th century.

When Columba first settled in Iona, he and his followers created a scriptorium. Imagine hooded monks sitting in rows copying ancient manuscripts and creating new sacred texts. The best surviving example is the famed Book of Kells.

The island became a place of pilgrimage and royal burial as its fame as a center of learning spread.
When the Vikings invaded Iona in the eighth century, the Book of Kells was secreted off the island to Ireland. It’s now housed at Trinity College Library in Dublin.

Known graves here include 48 Scottish kings including Macbeth, 8 Norwegian, 1 French and 4 Irish, as well as numerous clan chiefs. Templar knight gravestones reveal their presence on the island. Megalithic remains suggest it was a prehistoric burial site too. But why? Why did so many royal people come here, to this tiny island, to prepare for their final journey? Some say it’s because Iona is a borderland between life and death.

There is no denying that Iona is mysterious. The light is more translucent, more heavenly and less earthy, often filled with swirling mist. The water is blue, unlike the black waters in most of Scotland.

And the beaches are littered with beautiful green stones, Iona green marble. The island is famous for it, and the crystals have been collected as talismans for centuries.

Legend tells of a lonely monk who fell in love with a mermaid. When she was banished, she shed tears that can be found today, the small green tear-shaped crystals along Iona’s beaches.

There are also legends about magical “green eggs,” called Druid’s Eggs or Serpent’s Eggs. Which brings me around to that other tantalizing legend – the Druid’s library.
Could it be that Columba’s monks copied not only old Christian manuscripts, but the Druid writings they found on Iona as well? What happened to all that work?

It’s never been found, although modern historian Ashley Cowie, host of the TV series Legend Quest, swears he’s found the entrance to the lost library in a secret chamber under Iona Abbey.

Yes, Iona is chock-full of intriguing questions and mystery. And you can be sure I’ll be following Cowie’s investigation with interest. Wouldn’t an ancient Druid Chamber of Secrets would be an exciting way to conclude my Ancient Magic series?

--------------------------------
Hi. I’m Sandy Wright. I live in Arizona with my husband, a super-smart Border Collie/Aussie mix named Teak, and two huge black panther cats (18 pounds each), named Salem and Shadow Moon. Their daddy, Magick, was even bigger! He's featured in my debut novel, Song of the Ancients, the first book in my paranormal suspense series, Ancient Magic.
They say write what you know, and I'm Wiccan, so my debut novel involves witchcraft and Native American medicine magic. It's set in the energy-laden town of Sedona, Arizona.  It was interesting to introduce the concept of witchcraft, seen through the eyes of an ordinary, non-magical woman, and go through her reactions and disbelief along with her. While I did a lot of research for this book, most of the magical stuff I drew from my own Wiccan background and practice.
Sedona is but one earth "power site" in the world. The Ancient Magic series will take Samantha and Nicholas, as well as a few secondary characters, to adventures at other sacred sites. The second book, tentatively titled Stones of the Ancients, will take us to the ancient standing stones of Scotland, where I get to trace my own heritage while researching the book. The series continues to Hawaii to learn about Pele, the Goddess of fire and volcanos. The series will conclude somewhere along the ancient icy land bridge of the First People, maybe Alaska or Siberia.
Book One – Song of the Ancients is available now on Amazon, in both print and ebook.
Book Two, Stones of the Ancients, will be available in early 2018.