I seem to have a talent for being late. I used to say I preferred to be early. I used to say I was good at arriving on time or being ahead of time. Why? Because I'm not wild about the embarrassed entrance or having to explain where I was.

That used to be the case.

Which is why this post is going up, but later than I wanted. I can say this. I've been writing. I have. I've gotten good words on the document and I'm happy for that. I'm writing about dogs, which I love, so that's good, too. I'm competing in NaNo. I love that event. Maybe it'll help me get back to on time? I hope so.

So since we're just upon Halloween, here's a hot treat. My book, Craving His Roar. Check it out! 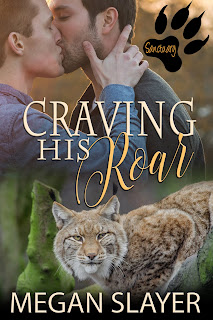 
Jesse’s never stayed in one place for very long. Being a lynx shifter, he enjoys a solitary life. Then, like a bad joke, the lynx shifter walks into the bar to listen to a cover band. The singer isn’t anything he expects, but everything he desires. But can a human and shifter make a relationship work?

Colin knows two things: he wants a life beyond the Mad Dog bar and for his band, the Full Collins Experience, to play more than just Phil Collins cover songs. The moment he sees Jesse, he’s smitten. He knows nothing about shifters, but his heart craves Jesse. There’s no guarantee the twosome will go beyond the bedroom, but Colin’s willing to try.

Can the loner really find a mate? Will his mate be everything he craves? Or will the human run the other way?

Posted by Wendi Zwaduk and Megan Slayer at 8:44 AM

Megan, we all have trouble now and then getting somewhere on time. I've written blogs VERY late at night or, horrors, the morning it's due. Or later. Like you, I hate the embarrassed late entrance. But it happens. Your book looks great. Perfect for the season.