Hi all, J. Hali here, so you know it’s Friday. I’d like everyone to welcome fellow Ellora’s Cave author, V.J. Devereaux, to Paranormal Romantics. VJ, thanks for taking the time to talk to me.

VJD - No problem, thanks for having me!

JHS – It’s my pleasure. Can you tell us a little about yourself?

VJD- I’m from Pennsylvania originally—Philadelphia by way of the romantic Pocono Mountains where I grew up—but now I live in Ohio, out in farm country. It took me four tries to find my soul mate, but I finally found him. (Laughing) I’m definitely an optimist. Persistent, too. No kids of my own but I have two grown stepchildren and a new step grandchild, two dogs, two cats and an African clawed frog named Hopper. I also have a full time day job — the best geek job in the world, testing electronics like computers and Xboxes.

JHS - Hey two original Southeastern Pennsylvania girls! And I’d love to have your job. Tell us, how long have you been writing? 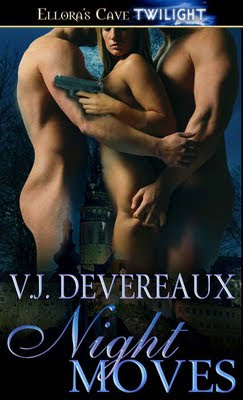 VJD - I self-published my first book, with illustrations, at age eight and got an A, but it would be nearly forty years later, when I met my husband, before I could really follow my dream.

JHS – Did you do the illustrations yourself?

VJD – Funny you should ask, as a matter of fact I did. Over the course of my checkered career I actually made a living as a portrait artist for a little while. I still do it, where other people doodle, I do portraits. LOL

JHS – That's so neat. I know this question is hard but can you tell us a little about your favorite character.

VJD - Which one? One from someone else’s book, this book or one I’ve written?

From someone else’s — Atticus Finch, from To Kill a Mockingbird.

My favorite character that I’ve written is from a book that isn’t published yet, The Coming Storm. Elon is an Elf, a swordmaster, defined by his Elven concept of honor, and trying to come to terms with humans. Including the one he doesn’t know he’s in love with. It’s complicated.

In Night Moves, which releases today, it’s Rafi, the female lead. She’s a lot like me when I was single and still looking, still hopeful, a little jaded and trying not to be.

JHS - I love that name—Elon, and his story sounds interesting. Who inspired or inspires you the most?

VJD - On a personal level someone like Nelson Mandela, or Daw Aung San Suu Kyi, people who sacrificed for their principles.

On a professional level, hands down, Nora Roberts/J.D. Robb. She rarely gets critiqued, slides under the radar, and writes almost consistently good books. I want her career.

JHS – We all want Nora’s career! Are there any genres you’d like to try writing in?

VJD - (Laughing) Oh, I don’t know, I’ve already written an epic fantasy (The Coming Storm) and its sequel; a mystery called The Last Resort that’s getting some pretty good feedback; romantic fantasy (Song of the Fairy Queen and Heart of the Gods); several contemporary romances; and a novel about a woman turned into an assassin by the government. I’ve even tried historicals and a western. I haven’t tried steampunk yet, that sounds interesting, and it’s been a while since I did horror. (I get bored easily, can you tell?)

JHS – Steampunk seems to be the next new thing. Are you working on anything new?

VJD - My next book with Ellora’s Cave, Cherry’s Jubilee, is in process. The cover is gorgeous!
I just finished the second in a series of books about demons (they seem to be the new vampires these days), and I’ve got ideas for the third.

JHS – You’ve been busy, lady. Can’t wait to see the cover for Cherry’s Jubilee, certainly got my mouth watering. EC does turn out awesome covers. Tell us, when you’re not writing, what are some of your favorite things to do?

VJD - Read, of course. And go to movies – I’m a huge action movie fan, my husband likes comedies. We’re going to see The Men Who Stare at Goats this weekend. Walk the dogs.

JHS – The trailer for that looks hilarious. You’ll have to let me know if it’s good. These questions are just for fun. What’s your favorite vacation spot?

JHS – Gosh, I’d love to go there too, I hear it’s beautiful. If you could own any car you wanted what would it be?

VJD - A Maserati, or any sports car really. I pay my annual speeding tax every year, and did on the way back from Romanticon!

JHS – Are you serious? (laughing) another speed demon in the house. RomantiCon was a blast especially the parts with the Cavemen. I’ll bet there’s a nice sports car in Night Moves *grins*. If you could do it all over again, is there anything you’d change about your life?

VJD - No, not even my first marriage (tres bad), because I got such great stories out of it. Besides, then I’d be a different person.

JHS - Thanks for sharing a part of yourself with us, you’ve had an interesting life. Now, tell us a little about Night Moves.

VJD - Here’s a blurb and a small excerpt:

With her unglamorous job, crappy hours and limited choices, Rafaela finds herself reduced to internet dating. She just wants to meet a man she considers even remotely interesting. Or satisfying.

Her latest match-up is tall, dark and handsome Michael. He and his cousin and companion, Nico—gorgeous must be a family trait—are vampires. They’re getting tired of constantly hunting for a good meal and good sex. Too many complications. Too much danger of discovery.

They have decided to offer one woman—the right woman—an interesting proposition. An offer that just might fulfill all of Rafaela’s wildest fantasies.

“Are you hungry, Raffia?” he asked, softly.
The original plan had been for a late dinner, but there was clearly no need for it.
Rafi searched his eyes, smiling at the play on her name. This wasn’t a game for him.
That kiss had made her stomach flutter. She was fairly certain she couldn’t have eaten a bite, even if the most enticing steak was put in front of her.
“No,” she said. “Are you?”
“A little,” he admitted, “but I can wait.”
Frowning lightly, Rafi said, “Are you sure?”
“Quite,” he assured her. “I’m not ready for the evening to be over but I don’t know that I want to stay here. Will you walk with me a while?”
She thought the cooler air outside would help her overheated body.
It did and it didn’t.
They walked through rain-washed streets, Rafi’s arm through Michael’s, laughing and talking. She could feel the muscle beneath the shirt, beneath the perfectly tailored suit.
He seemed to enjoy her company, bowing his head now and then to hear her reply.
There were moments when he would unexpectedly swing her into his arms to kiss her senseless and she would feel almost as if she were floating, as if she were…somewhere else.
The first time he did it, it surprised her. Unconsciously she wrapped her hands around his strong wrists as he halted, his unexpected motion bringing her around in front of him as he brought his hands up to cup her face.
By itself, the tenderness of the gesture alone nearly undid her.
His lips touched hers with such obvious delight, such obvious pleasure, that it caught her off guard.
One moment he was laughing and then she was in his arms.
For a moment he drew back to look at her, his hands sliding deeper into her hair, his eyes very intense. The intensity and heat in his gaze set off a firestorm inside her as his mouth settled to hers once again. Every time he did it—looked at her that way—she felt warmer, safer, as though she needed to get closer. He took her mouth deeply as his hands skimmed down her back to pull her closer, to mold her body against his hard one.
She skimmed her hands up into his silky dark hair as his hands settled on her hips. Her body seemed to be one pulse point, throbbing and aching. She had never reacted to a man this strongly, this quickly.
For the first time in a long time, Rafi felt a breath of hope. She had started to become cynical, jaded and she knew it. And hated it.
Rafi found that she didn’t care that it was getting late. She wasn’t on duty the next day so it didn’t matter how late she stayed out. The more they talked the happier she was, the more they kissed, the warmer she got. Excitement raced through her.
They came to a stop and Michael drew her into his arms once again, but this time the intensity and heat of his gaze nearly scorched her as he skimmed a hand into her hair. He studied her face as if memorizing every line of it, seeking something in her expression, in her eyes.
Michael gestured. “My car.”
It was a very nice Jaguar, dark green, with soft honey-colored leather inside.
Rafi looked at him, mesmerized.
“If you will trust me,” he said, “I would like to show you my home. I like you, Raffia, very much. I want you to come with me.

Here's a look at the video:


JHS - Nice! How can readers get a copy?

VJD – They can buy it today at Ellora’s Cave and this is the direct link: http://www.jasminejade.com/ps-7784-50-night-moves.aspx

JHS - I know how busy an author’s life can be and I appreciate your taking time out of your schedule to join me at Paranormal Romantics. Here’s a few other interesting facts I was able to get out of VJ:

JHS - Sounds like you want to be smack dab in the middle of wine country! I lived in the San Fernando Valley for 8 years and would love to go back. Maybe we’ll both get there. VJ, thanks so much for stopping by and don’t forget, you can get her book Night Moves starting today at Ellora’s Cave.

VJD - Thanks for inviting me!

Hey folks, come by next Friday. I’ll see what I can cook up for you. In the meantime: Growl and roar-it’s okay to let the beast out. - © J. Hali Steele
Posted by J Hali Steele at 3:01 AM

Hi :)
Thanks for the fantastic interview with VJ Devereaux & thanks to VJ for sharing. I enjoyed learning about her & her writing. And wow!, what an excellent excerpt!
Thanks again,
RKCharron
xoxo

Isn't she great! I know who to have do my portrait now.

What is it about that car that makes it so sexy? I do love Jaguars. Thanks for the wonderful interview ladies. It is going on my To Be Bought this week pile.

Nice interview, now I have another one going on my TBR Pile...

I love that car too, Rebecca! lol - I need another job, just so I can buy all the books I want.

Mitz, my pile is tilting precariously...

Welcome to Paranormal Romantics VJ. I love that car too. I asked my husband a few ago if he could have any car what would it be and chose a Jag. LOL

That new Jag is pretty hot. Must say though my fav was my Lotus Esprit - and if I could ever afford another sports car, that's what it'd be.

she great! I know who to have do my portrait now.