I had to pause and take a moment out of how to select sword lengths based on your height because I remembered I needed to blog tomorrow (it's Tuesday night when I wrote this) So, because I had nothing in the way of insightful teachings to bring you, I'm sharing the books I'm currently reading.

I recently finished the first book in this series and really enjoyed it. Now, a few chapters into this book, I'm finding it no less funny and entertaining.

Theresa Nichols is a red-blooded young woman—trapped in a red-hot dragon’s body. Then the chance for a real-live date with her cyber boy toy Zeke sends her running to Satan to strike a deal. After all, when you've gone without sex for over two hundred years, a night of good lovin’ is worth your eternal soul, right?

Zeke Siccardi is a private detective trying to live a normal life—and outrun his dragon-slaying past. Not easy to do when his sexy online paramour turns out to be a dragon with a contract out on her life. Now Zeke has to protect a woman he was born to kill. But with the love of a fire-breathing sexpot, how hard could it be?


How I Met My Countess by Elizabeth Boyle (paperback)

Having read a lot of Ms. Boyle's other works, I'm no less excited about this one. I love a good historical and even though I'm only on chapter 1, I can't wait to delve deeper.

The Earl of Clifton intended one day to find the perfect countess...

...until he met Lucy. The improper and impetuous daughter of an infamous spy, Lucy Ellyson saved Clifton’s life and taught him everything he needed to know about serving his country in the dangerous shoals of the war torn Continent... even how to fall in love. He vowed he would come back to her, he would make her his unconventional and unlikely countess, but the war and duty kept them apart for too long and when he finally returned, she was gone.

Lucy’s father had told her that the Earl of Clifton would never return for her, warned her that she would never find a place in a society that would scorn her birth. And he was right. For when Clifton returns, it isn’t to reconquer her heart, but merely to ask for her help in finding an elusive dowager, never realizing that the Marchioness of Standon—the woman who holds the keys to his family fortune—is none other than Lucy herself. It doesn’t take Clifton long to realize that his greatest mission yet may be to face the tragic secrets of their past and rediscover the passionate love that once ignited them both...

This is a new to me author but the book cover and blurb looked interesting so I'll give it a shot! 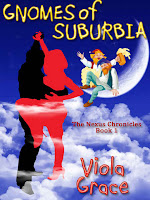 Abby wants a new life, but magic was never on the agenda. Her new neighbours are great, if you like mermaids, werewolves, and medusi. Adapting to her role in the neighbourhood is tricky as it involves pulling magic between dimensions, but the garden gnomes that she animated try to help when they can. The warlock next door is also a problem, every time he gets near her, her power goes berserk. When a stalker joins the crew and tries to end Abby's new career the hard way, her life is danger and the neighbours are up in arms.

I apologize in advance for not providing links on where to buy these books. I'm too lazy LOL but as you can see, my tastes range far and wide :-) I would have put all of them on my e-reader but the first two are way too expense right now.
Posted by Sandra Sookoo at 12:00 AM

I really love Stephanie Rowe's series, but she hasn't written any new additions to it in a few years. I would love for her to visit them again, to get an update on all of the characters.

Thanks ladies. I only just found Stephanie's books last year and have scooped the first three up from paperback swap. In fact, that's where I got all of Elizabeth Boyle's novels (except this new one. I actually had to shuck out bucks for it)

At this rate I don't think I'll ever catch up with all the books I need to read.

I'll be picking up Stephanie's books, it looks fantastic!

They do rock! She writes paranormals with humor just like I love to read and write :-) A fair amount of snark too :-)