A few years back, I had a dream about a man with piercing blue eyes. I caught flashes of him, mere glimpses of the curve of his neck, the collar of his shirt, the strong line of his jaw covered in five-o-clock scruff. In the flurried chaos of sleep, I caught a whiff of cologne, clean and masculine and powerful. There was music playing; drifts of notes floated over me. I heard bits from a dance club, the fierce, ominous beat of techno dark wave, and the lonely, deep pulls of a Cello solo. But above it all was the sound of leather soled shoes on pavement. I saw a figure in the fog, tall and broad-shouldered, draped in black.

The images haunted me, coming closer and then slipping away. I awoke with a pounding headache and an aching need to know more. But dreams are fickle, and the shadow-killing rays of the sun are ruthless. Night slips away, sleep evaporates, and the sounds, sights and smells of our reveries are more often than not lost.

As I said, that was several years ago. Since then, I’ve had many dreams, both waking and not. In one, a man’s stark green eyes followed me across the TGB while he directed his men to block every one of my exits and cage me in. I wrote his story under the spell of his perfect, mesmerizing voice and am enraptured by it still. In another, the rumble of a motorcycle vibrated my soul and the smell of leather followed me back into the real world, seducing me to pick up the pen once more.

It’s an enormous gift to be a writer – to be able to take these temporary obsessions and share them with the world in such a way that my obsession is effectively passed on to some other unsuspecting soul. To know that I am not the only one who falls in love with my characters is truly amazing. I have been hypnotized by the men of my other realms, seduced by them, held prisoner by their every undeniably charismatic attribute. But lucky for me, I don’t have to suffer this captivity alone. As long as you all continue to open my books and read, I’ll be in good company. ;) 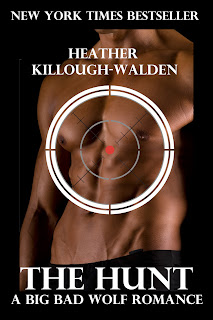 The Hunt, by Heather Killough-Walden is the fourth book in the New York Times bestselling Big Bad Wolf series….

Byron Caige has been a prisoner for the last fifty years of his supernaturally long life. Just when he gives up hope of ever knowing the taste of freedom again, he is unwittingly rescued by the very same woman who only wants to see him dead. Katherine Dare – Kat – is smart, fast, strong and beautiful – but unfortunately she’s a Hunter, and she’s convinced that Byron murdered her father twenty years ago.

As supernatural war breaks out amongst the otherworldly of Earth and threatens the existence of entire races, Kat is faced with a terrible decision. Should she give up her cause and believe Caige when he professes his innocence? Or should she fight him and possibly avenge her father’s taken life – even while she forfeits her own?

“You smell good,” he told her, closing his eyes and inhaling slowly. When he spoke again, his fangs were fully elongated. “Like promise.”

“I’ve heard…. ” Katherine broke off, swallowed, and started again. “I’ve heard that’s what a lot of alphas think a dormant smells like.” There was no conscious thought behind what she was saying. Byron’s nearness was playing tricks on her and her mouth was simply spitting things out unfiltered.

Byron chuckled softly and opened his eyes. They were glowing again; a bright platinum that took her breath away. “I can imagine,” he said, offering her a purely depraved smile.

Katherine had no time to wonder how things between them had shifted so quickly into the state they were in now. A day ago, she’d wanted to kill him. And now she wanted…. What?

“If you so badly want to mark up your body, little Kat, I can do it for you,” he told her then. “And it won’t hurt nearly so much.”

Kat’s stomach did a flip and her heart skipped a beat. Instant warmth flushed across her stomach and spread lower. She tried to step back on pure reflex, but Byron’s grip on her wrists tightened, and he used the hold to pull her forward, stopping her retreat.

“That way leads only to pain,” he told her, his gaze flicking to the open cave entrance just over her shoulder. At once, Kat understood. She’d nearly stepped out into the sunlight. Byron was ruining the effects of twenty years of self protective training in the course of seconds flat.

“Please,” she whispered, not knowing what else to say.

“Please what?” he asked, pulling her further into the darkness of the cave. She stumbled after him, her gaze trapped in his. In the dark, his eyes glowed more starkly, filling her with an anticipation that very nearly bordered on fear.

“Do you still think I killed your father, Katherine?” he asked, his grip on her arms lessening now that they were well away from the cave entrance.

Katherine digested his question and then shook her head. It was true. She didn’t believe it any longer. Not at all. She knew, in her heart, that he was innocent. And she knew that the warlock king was not.

Yes, she thought without hesitation. That, too, was true. Byron Caige scared the hell out of her. Everything about him screamed danger. He was big, he was strong, he was powerful. He could send the city into a blackout if he wanted to; of that she had little doubt. He had glowing eyes and razor sharp fangs and he smelled like the most delicious sex in the world just waiting to happen. Byron Caige represented everything a mother ever warned her daughter about.

And he was standing over her now, his hands wrapped lightly around her wrists, his smooth, deep voice sending rivulets of pleasure across her skin. “Yes, you scare me,” she told him.

“Good,” he replied. There was no hesitation on his part either. His smile broadened, ever so slightly, and he leaned in. “I’ll let you in on a secret,” he said. He was so close, she felt his words whisper across her lips. “I can smell just how very much I scare you.”

A hard, hot embarrassment ramrodded through her at those words. She knew exactly what he was referring to. His kiss on her wrist, his nearness right now – they were making her wet. And he could scent it on her.

You can find The Hunt and the rest of the Big Bad Wolf series at Amazon and Barnes and Noble Nook!

Thanks for dropping in, Heather! Your books look fantastic!! ;-)

I want to meet the man with the blue eyes. :)

heather's books are great i love them!!

I love these books, I have enjoy them so

Thanks for stopping by! I read the excerpt, and I'm going to have to hunt this series down. ;)