When Myth Becomes a Reality

Imagine for a moment you’re a child, opening your first book of mythology, and falling in love with the images of beautiful gods and goddesses. Every heroic tale has you fascinated, and engrossed with all the love and riches. But the punishments the gods delivered, terrified you. Take, for example, the story about the Prometheus’ stealing the secret of fire and giving it to mankind. I mean, the image of the Titan being bound to a stake, and have his regenerating liver eaten out by an eagle daily is disgusting.

It’s these first experiences that I had with Greek mythology, which has become a bit of an obsession for me. If there’s a movie, book, or article written on the subject, you better believe I’ll be buying, reading, or watching it. J

Myth became a reality for me when I started to write about one of the nine muses. Melpomene, for whatever random reason called to me, and with her being the Muse of Tragedy, I thought it fitting to pair her with a military figure. Toss in some embellishments, fictional characters, and combine it with a contemporary setting,
and you’ve got yourself A Gift From Fate.

Do you have a favorite mythical creature or deity? I’d love to hear from you.

But first, here’s a blurb and excerpt of my latest release. Enjoy! 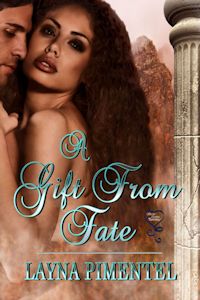 After colliding with a stunning vision in white, retired Staff Sergeant Brent Daniels offers to drive the beautiful stranger to a hotel for the night, but instead discovers he’s with one very lost creature. He’s bewitched by her sinful curves, her dark and mesmerizing eyes, and the pull at his soul with each minute passing. Nevertheless, he can’t shake the feeling she’s hiding something.

Melpomene, daughter of Zeus, finds her handsome rescuer resembles the man who has continuously haunted her dreams. Before long, she’s in his arms, wanting more. Knowing their days are numbered, desperation leads her to reach out for help by an unlikely ally.

Just how far will these two lovers go, and what will they sacrifice to be together?

“My name is Melp—Mel Pomene.” She’d nearly given herself away. Zeus, her father, would have heard had she whispered her name. Her father. Heavens, he’d turn the mortal realm upside down if he suspected she was here. And right now, she desired nothing more than to stay a little longer. With any lucky, I’ll return before he notices.

“Well, Mel, it’s a pleasure to make your acquaintance. Your last name is rather unusual. I assume you’re not from these parts?”

His question silenced any thoughts drifting through her mind at that moment. A new kind of tension rose within her. She couldn’t disclose her origins or who she was. Guilt settled in her stomach for leaving her sisters behind, but she wasn’t given a choice. The Fates dropped her here, only mentioning an experience for three days…provided Zeus didn’t find out. Only the Gods knew what he’d do if he found her cavorting around without a proper escort.

“Earth to Mel? Are you all right?”

“Yes, I am. I’m just thinking of home, which is Greece. I’ve come to the United States for an adventure, it would seem.”

He chuckled before she’d finished speaking.

“What is so amusing?”

“The mere mention of seeking adventure after getting lost is rather comical, nothing else, sweetheart.” He removed his right hand from the wheel and petted her knee. The warmth of his hand stirred an unfamiliar emotion within. This was the man from her dream. Those hands had touched parts of her body no mortal would have dared, and here she sat, wishing he’d do more than pat her.

WHAT AM I WORKING ON NEXT

I’m working on the second installment of my Pleasure Garden Follies series, and something super sexy, I hope to announce soon. Make sure to stop by my site for latest updates.

Born and raised in Toronto, Ontario, Layna discovered her love of reading at an early age. When she isn’t devouring salacious romance novels or writing, she enjoys losing herself in researching ancient history and mythology, weaponry, and hiking. She lives in Northern Ontario, with her husband and two daughters.

Layna is a member of the Romance Writers of America, and is a monthly contributor at 69 Shades of Smut. For updates on her upcoming releases, or to leave her a comment, you can find at:

Jessica E. Subject
Jessica E. Subject is a USA Today bestselling author of science fiction and paranormal romances, bringing to life a wide variety of characters. In her stories, you could not only meet a sexy alien or a pop star tiger shifter, but also unsuspecting clones and feisty omegas. You may be transported to a dystopian world where rebels are fighting to live and love, or to an alternate reality where shifters live among humans. When Jessica is not reading, writing, or doing dreaded housework, she likes to go to fitness class, listen to BTS, and walk her Great Pyrenees/Retriever her family adopted from the local animal shelter. Jessica lives in Ontario, Canada with her husband and two not-so-little children. And she loves to hear from her readers.

Thanks for having me Jessica!

It's great having you here, Layna! Congrats on your new release! :)

i hope you enjoy your visit here today!