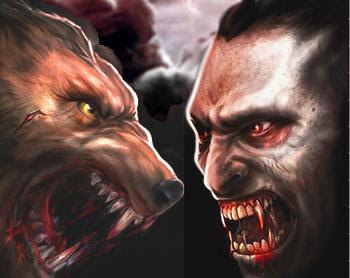 I’ve written two paranormal romance series – my “Touched by Midnight” featuring vampires and my “By Moonlight” populated by shapeshifters. If forced to pick one type of supernatural character over the other . . . I just can’t do it!
Thankfully, this is one of those rare months when I have two of my favorite books from two of my favorite paranormal genres for S*A*L*E! You can sink your teeth into both of them and decide for yourself!

First up (age before beauty!) is MIDNIGHT REDEEMER. 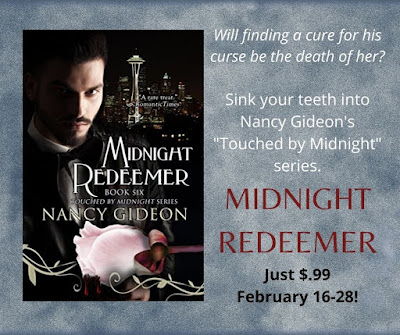 Amazon | Barnes & Noble | Kobo Books | iBooks
Add to Goodreads TBR→
I love smart men and women playing dangerous cat and mouse games. But which one is which? Scientist Stacy Kimball is looking for a cure for the blood disease that will eventually kill her, as it did her mother. Gorgeous, reclusive philanthropist Louis Redman could provide the answer. All she needs is a sample of his rare blood type. What Stacy doesn’t know, is they share the same driving purpose. He wants her blood, too. A paranormal love story, a Who Done It mystery, Frankenscience ethics, sneaky government ops, and a return of characters and complications I adored from previous books . . . but you don’t need to have read them to sink your teeth in and enjoy MIDNIGHT REDEEMER! For just $.99!

Next, is REMEMBERED BY MOONLIGHT.

Amazon | Barnes & Noble | Kobo Books
Add to Goodreads TBR→
I LOVE suavely dangerous businessman/shapeshifter leader Max Savoie and his love, tough as nails NOPD detective, Charlotte Caissie . . . enough to feature them as the main H/H in six out of 15 books in the “By Moonlight” series (though they figure prominently in most of them!). REMEMBERED BY MOONLIGHT is the perfect place for a new reader to jump into the series . . . so they can learn about the characters and previously plotlines as Max, who has been stripped of his memory, does. Here’s a taste of how that’s working out for him . . .

An Appetizing Sneak Peek from
Remembered by Moonlight…


It was well past the supper hour when Charlotte Cassie let herself into the apartment jugglingbags of Chinese takeout. Finding the rooms dark and empty, her mood sank. Appetite lost at the thought of dining alone, she slid the sacks into a nearly empty refrigerator, exchanging them for a beer. She studied the cool glass bottle then, with a heavy sigh, put it back, resigning herself to a comfortless evening.

She paced and mulled over that question as shadows deepened along with her fears.

Had she expected it to be easy having him here so close and yet so agonizingly far away? Bad enough watching him in that antiseptic clinic cell, a prisoner of his own panicked madness, raving, raging, out of control. Worse was having him here,temptingly near yet impossible to reach in the lush, sexy surroundings he’d built for them to share together. A bargain made in heartbreak hell.

It was practical, logical, she’d argued with the others and with herself. Where better for the damaged Shifter King to recover his fragmented past than in surroundings rich with the memories they’d made? The high rise stronghold he’d erected to house his clan would become his own protective cocoon, where he could remain safely swathed in the details of his life. A huge walk-in closet filled with his designer suits and tailored shirts. The scent of his toiletries in the bathroom, of their bodies entwined together in the bedroom. He had few personal belongings and those he kept out on River Road in the mobster fortress where he’d been reared by Jimmy Legere, but his simple tastes were reflected here in the clean yet sophisticated line of each and every room. She’d been sure the proximity would provoke something . . . other than her frustration.

Max had come with her willingly enough. What option did he have? Remain locked away at the Institute as a subject of surveillance and experimentation? To make the transition less awkward, they had made an agreement to set up cohabitation with no pressure to fulfill the other’s expectations. She would walk him through the personal ins and outs of their life together in an effort to spark something familiar. She’d keep him safe from the outside world and from himself. And from her. What an excruciating Catch 22 that had become. To pretend not to ache for his touch. To keep her hands from reclaiming the long, powerful lines of his body, from absorbing his heat, tasting his lips with a hunger that just kept growing. To roll over in the huge bed only to find the two of them separated by more than just space. Or, more often than not, him absent, preferring the couch to her company for what little rest he was able to find.

Though she might be tortured by cherished memories, he was not. She was nothing to him but a protective port in his emotional storm. And that knowledge was driven home like a stake through her chest every time they were together. Every time he stared at her through those cool green eyes without the slightest flicker of response. Every time he took that distancing step back to evade the casually calculated graze of her hand. Every time he lay next to her in the night and silence created an unbreechable force field of discomfort.

Tripping over him every minute of the damned day only emphasized how much she wanted, needed him back. And underlined how far he was away.

Vampire or Shapeshifter? At just $0.99 you can buy both and decide for yourself . . . and please, let me know which one YOU choose!
♚♚♚♚♚
Nancy Gideon on the Web
Website | Blog | Facebook | Twitter | Pinterest | Goodreads | Amazon
Goodreads “Nancy Gideon by Moonlight” group

Oh that would be a hard choice for me as well- with them both on sale, we don't have to choose!

Love them both! All the best with your sale, Nancy!

You know you introduced me to both vampires and shifters. Before reading yours, I couldn't figure out the appeal. I like them both, but I think my preference is the shifter. I like the concept of being able to change one's appearance. I've already taken advantage of your sale to reread those stories.