When Secondary Characters Demand their Story by Mary Morgan

As a writer, I’m constantly surprised by the secondary characters in my stories. Often, they emerge silently through a scene. Yet their powerful presence does not go undetected by me or my readers, and they soon demand their own story. Let me expand further with one of my favorite secondary character who also became one of the greatest heroes I’ve written.

The Journey of a Fenian Warrior Leader…

To understand this great warrior, Aidan Kerrigan, let me tell you about the world of the Fae…

I have always been fascinated with Celtic mythology, so it only made sense that I would develop and expand the world of the Fenian Fae Warriors. Theirs was a world rich in legends, colors, and senses. I’ve based my own fictional account on the legend of the Tuatha Dé Danann—one of the invasions of Ireland. They were known as the Shining Ones or the Fae. The Tuatha Dé Danann were defeated in two battles by the Milesians, whom historians and scholars alike agree were probably the first Gaels in Ireland. It was agreed that the new invaders (Milesians) and the Tuatha Dé Danann would each rule half of Ireland. Therefore, it was that Amergin of the Milesians chose that half of Ireland which lay above ground, leaving the Tuatha Dé Danann to retreat below. They were led underground by Manannán mac Lir, God of the Sea, who shielded them with an enchanted mist from mortal eyes. As time passed, they became known as the Sidhe (Shee), or Ireland’s faery folk.

The great Aidan Kerrigan was a tale I feared to write. When he first appeared in the story, Dragon Knight’s Medallion, Order of the Dragon Knights, Book 2, I panicked. I did not know he was a Fenian Warrior until he walked through the crowd of people at the airport to greet his daughter, Aileen. His presence loomed mighty and grew with the previous stories in the Legends of the Fenian Warriors. Regardless, I knew then his and Rose’s love story had to be told.

With each Fenian Warrior’s story, I shared a layer about this Fae. Little did I know when I penned Aidan’s first line of dialogue that he was the leader of the Fenian Warriors, came from royalty, and his sister was Queen of the Fae realm. He chose not to reveal any of this to me. And this is why I became terrified. What more could he share?

Well, dear readers, Aidan made it simple. He told me to write a love story, stating, “For you see, love is greater than all the power attained in the world—be it human or Fae.”

Therefore, I took you back in time to when Aidan was the leader of the Brotherhood. To when this great warrior had no blemish to stain his life and love tossed his world upside down, altering everything he knew.

And the lovely Rose MacLaren was a perfect match. As he professed to her, “I saw beauty inside the depth of your soul. Your intelligence would rival any Fae in the herbal gardens, and you possess a wisdom that sparks from a desire to learn more. You challenge me, leannán.”

I hope you’ve enjoyed a glimpse behind the scenes of this powerful love story. 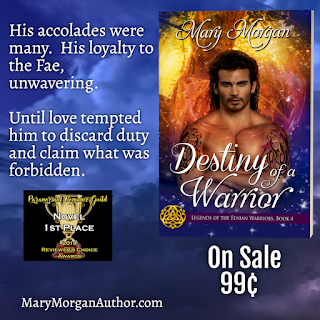 As leader of the Fenian Warriors, Aidan Kerrigan’s accolades are many and his loyalty to the Fae unwavering. When an unexpected mission sends him to the human world and a chance encounter with Rose MacLaren, he’s tempted for the first time in his existence to discard duty and claim what is forbidden.

Rose MacLaren, a Society of the Thistle member, yearns to expand her botanical knowledge with her love of history. After her rescue by a handsome stranger, she is compelled to look beyond what her rational mind comprehends and unravel the secret of the standing stones, as well as the man who captivates her.

In a mystical world ruled by ancient laws and edicts, can a fierce warrior choose a path destined for love? And will a woman honoring the ways of the land believe in a myth only spoken of in legends? If they do, will their love be enough to defy death’s punishment? 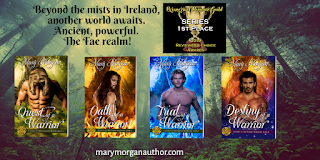 It's definitely interesting when a new character appears for a writer. One is never sure how important they will become. Glad you were able to get to know Aidan enough to write his story!

Thanks, Jessica! I have to say that most of my secondary characters received their own story. Currently, there are two waiting (not so patiently) for me to pen their tales.

It's wonderful when characters appear and let you inside their soul little by little.

I can certainly identify with secondary characters who demand their own stories. And yours are always delightful! Continued best, Mary.

Secondary characters are why I do series. LOL. I always fall in love with them two and they need their own HEA!

A wonderful post, Mary. Yes, there are certain secondary characters who just won't be denied. As always, wishing you the best, and good luck with your sale!

I never know when starting a book which secondary (or even tertiary) character will rise up and demand their story. It's so much fun. Thanks for the intro to Celtic legends.

It's absolutely amazing, Jennifer! Thanks for stopping by.

Exactly, Abigail! Yours are awesome, too! This is why I don't do other stories outside my series. There are soooo many secondary characters and plots within my own series. I love creating these epic worlds.

With all that being said, I stepped out of my "series world" and wrote a short story last year for a boxed collection for charity. Shocked myself, lol!

Thank you, lovely Judith! :) I'm hoping others have not read about the great Fae Warrior, Aidan Kerrigan.

Thanks, Diane! Celtic mythology is a favorite of mine. :) Currently, I've been immersed in the Norse legends. They're much more complex and layered. Fascinating!

You series reminds me of the Karen Marie Moning's Fever series (which I loved!). Gonna go and grab my copy of yours.

Thanks for sharing!!
Keri

Excellent post. I enjoyed his and Rose's story very much. It is funny how the secondary characters come into their own over a book or two then steal the hearts of our readers. Good luck with your sale.

I sometimes tend to love my secondary characters a little too much, lol. Great post!

Aww, thank you! I'm honored that my series reminds you of the "Fever" series, Keri! Mine isn't as gritty and dark as hers (gosh, do I remember that cliff-hanger she left us with in one of the books). I hope you enjoy Aidan and Rose's love story. Also, the sale for Destiny of a Warrior goes on sale this Friday, though Amazon tends to get a jump-start and will probably start the sale on Thursday.

Thanks so much, Tena! xo

Yes, Maureen! Often, I've had to push aside those overbearing secondary characters when they attempt to dominate an entire scene. ;)