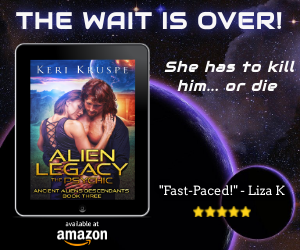 Here's a shameless plug for my newest SciFi Romance release!

Jordyn is a professional woman at the top of her game. That is until Auntie reveals the horrible truth. Not only is her aunt not her aunt, but she claims Jordyn isn’t even human. To make matters worse, Ancient Aliens from the distant past are coming back, intending to take over Earth.

And they need Jordyn to carry out their dastardly plan.

Psychic Michael feels the pull from Jordyn after the aliens release the power within her. But he knows he had to resist the urge to find her. If he and Jordyn come face to face, she’ll absorb his abilities which might end up killing him.

Drawn into a dream world, Jordyn and Michael discover they’re kindred souls. Their all-encompassing love is something they never believed possible.

Before the alien’s release Jordyn as a lure to capture Michael, she’s injected with a heinous poison that will force her to do what they want. Complete with a timer. Either bring Michael back or suffer an agonizing death.

Jordyn can’t believe how fate has screwed her. She survives an alien abduction, endures alien experiments, given superpowers, and meets the man of her dreams.

Only to be forced to kill him… or die.

Reader Beware: If you like scorching hot alien-hybrids, gut-wrenching adventure, and a steamy romance, you'll love this series. While it is book three and the invasion is still creeping closer, there's no romance cliffhanger with a guaranteed HEA! This riveting Sci-Fi Romance is intended for mature audiences.

I’ve been fascinated by the works of Zechara Sitchin and Erich Von Daniken as well as the History Channel’s Ancient Aliens. My underlying question, if those theories were true, what happens when the aliens come back? From there I got the idea to loosely base my newest SciFi romance series on that question. That’s when The Ancient Alien Descendants series was born. The prologue novella is offered FREE when you sign up for my newsletter on my website.

This is Book 3 that features the middle son, Michael. Michael is not only the psychic of the group, but he is also a computer genius who was first introduced in the first and second books.
I admit this book turned out to be a little darker than the first two. The heroine, Jordyn, gets captured and experimented on by the aliens called the Akurns. And our hero, Michael, is a recluse who struggles to be around others after a crippling accident he caused in ancient Rome as a gladiator that cost the life of a beloved child.
Both Jordyn and Michael have to work through their emotional traumas to learn to trust each other to become who they were meant to be together.

Want to get caught up? 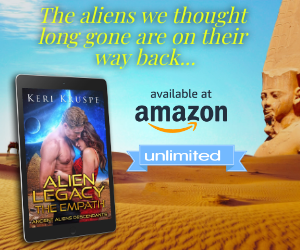 An alien empath who long ago shut his emotions down. A lonely woman, unaware of her vital role in preventing an upcoming alien invasion. Thrown together by chance, can they overcome their mistrust to save us all? 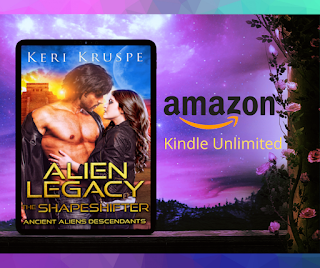 A smart-ass alien shifter who struggles against past heartbreak. A woman who isn't what she thinks she is. Together on the run from invading aliens and the CIA.

Click Here
I'm currently working hard on Book 4 - Alien Legacy: The Vampire. This one is taking us away from Earth on a hidden city the aliens created called Azadi. And, for the first time, one of our hero's (Zamush) steps foot on the alien planet of Akurn. I'm hoping to have an April release for that one (fingers crossed).
Here's to the upcoming holiday season. Happy Halloween! 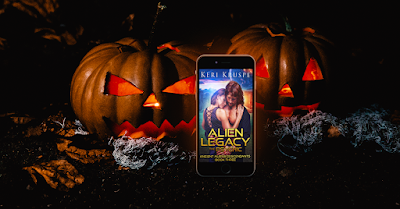 This sounds wonderful - an adventure, a romance, toss in sci-fi and ancient aliens - what more could you want?!

Mary and Nancy said what I thought. Love the History Channel. I always start thinking "what if..." Your newest sounds super.