Those Darn People in My Head and in My House 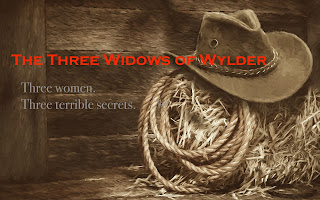 I have a crowded house this week, not only with visiting family for the holidays but also a new set of characters from my recent release, The Three Widows of Wylder. The characters from all my books never entirely leave me, but my most recent books especially stick in my mind.

The Three Widows of Wylder is historical fiction but also women’s fiction in that a great deal of the story is about my characters’ internal journies. In this novel, set in the late 1800s, there are three main characters, with chapters told in alternating points of view.

Clara is a bit of a schoolmarm type of personality. She’s constrained by circumstances to follow her husband’s lead and never allowed to follow her own dream. This becomes evident in that her wish to become a mother is unfulfilled. She asks her husband for a divorce, hoping to start anew, but he believes their childless state is God willed and refuses to consider divorce. In the 19th century, divorce was very uncommon and difficult without a husband’s consent.

Mary Rose is a vain, spoiled woman who has been widowed twice by the age of twenty-two. She desperately seeks wealth and, for women in this era, this typically comes through marriage. She’s devious, ambitious and dangerous.

Emma is still in her teens, and the most level-headed of the women. She shoots straight, rides hard, and hunts for her own food. When the story opens, she’s been living on her own for months, traveling across country, and has learned that people are trouble.

When the three women meet, on the run from their pasts, they clash even while they help each other. By the end of the summer, none of them will be the same.

Good or bad, I love my characters, even naughty Mary Rose. While their stories end with this book, I still think about each of them, almost as though they are real people. Who will Mary Rose be at age fifty? What is next for Emma and Clara? They’re like extended family who I want to keep in touch with; frankly, I’ve spent more time with my fictional characters than extended family this year.

This is my eighth novel and so there are rooms full of characters in my head. I do wonder what a holiday dinner would be like if they all gathered together – such a disparate bunch! I think it would turn out to be a pretty dysfunctional family gathering, but it’s amusing to consider such an event.

Happy Thanksgiving to all who observe the holiday. 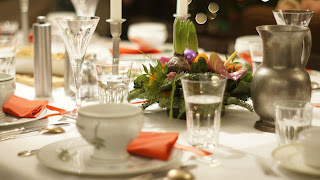 Here’s a bit more about The Three Widows of Wylder:

Three women on the run.

After the death of her husband, Clara flees a hanging judge and seeks refuge with her brother in Wylder, Wyoming.

With secrets of her own and good reasons to flee, spoiled and vain Mary Rose joins Clara on the trek to Wyoming. Surely a suitable man exists somewhere.

Emma is a mystery. A crack shot and expert horsewoman, her harrowing past seeps out in a steady drip. She’s on the run from something, but what?

After the three women descend on Wylder, a budding romance leads to exposure of their pasts. As disaster looms, will any of them escape? 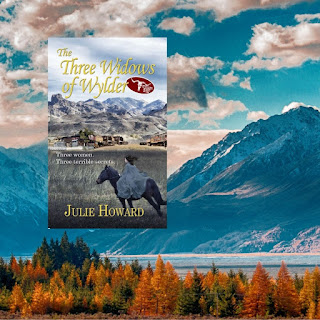 Emma stood, legs apart, one hand on the pistol at her hip. The covered wagon was the type used years ago by pioneers, before trains tamed the prairie, and they still lumbered across areas where tracks hadn’t been laid. Two women sat side-by-side, too focused on their argument to yet notice the camp they entered. Their one horse, overmatched by the heavy wagon, was damp with sweat, its mouth flecked with froth.

“We should have stayed on the main road.” The peevish one appeared much younger, curly gold hair topped by a large straw hat. She wore a light-yellow dress with lace at her wrists and throat, a perfectly inadequate outfit for travel. “Someone could have provided directions.”

The older woman had finely-drawn features, a few strands of gray threaded through her dark, uncovered hair. Dressed in sensible blue calico, she gripped the reins too tight and the poor horse gave a pathetic shake of its head. “The whole point was to avoid people,” she sniped.

Emma strode forward and seized the reins. “For God’s sake, you’re killing him.”

The two women gaped as though at an apparition. The horse, released from harsh hands, lowered its head and halted. Its sides heaved as flies drank at its sweaty flanks.

“Whomever let you two fools handle a horse should be whipped.” Tempted to dispatch the women to hell for their cruelty, Emma rested her hand on the pistol’s handle.

They two travelers spoke in tandem. “Who are you?” and “How dare you call me a fool.”

As Emma crooned into in the horse’s ear, her expert fingers undid the buckles at its shoulders and haunches. By the time the older of the two women climbed to the ground, the horse was unhitched and Emma led it to the creek.

“That’s our horse,” cried the one in yellow. “Clara, what is that insane girl doing? She’s stealing him.”

Emma halted, shoulders stiff. She turned and pointed the pistol at the one with lace at her throat. “I’m no horse thief.” She cocked the hammer. “Apologize.”

Julie Howard is the author of the Wild Crime mystery series and Spirited Quest paranormal mystery series. She is a former journalist and editor who has covered topics ranging from crime to cowboy poetry. She is a member of the Idaho Writers Guild and editor of the Potato Soup Journal. Learn more at juliemhoward.com.

This sounds wonderful! Just the read I'm looking for while the frantic holiday season settles.

We all know about those character that won't leave us alone until we tell their stories. Fun, frustrating. Your characters sound very interesting.

Congrats on the release and Happy Holidays!