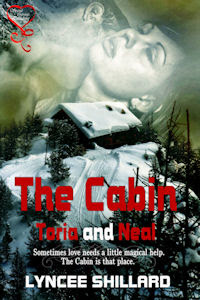 June 16, Toria and Neal will be released by Secret Cravings Publishing - the first in my series The Cabin.


The Blurb....
Luther is a love witch who believes no one is beyond falling in love.  Just sometimes they need a little help… in the form of The Cabin. A magical place where all barriers to stop love are removed.
The first in a series of short stories is the one of Toria and Neal, two people who have stopped believing in love.  Their love life looks bleak until Luther invites them to his cabin.
Toria had a rough childhood. She is determined to work hard
and save her money so that she never has to be poor again.  With all of her drive, she’s left no room for love in her life.  Neal has terrible dreams and leftover PTSD from his time at war. His ex-wife has convinced him he is unlovable.

Luther believes in them and he believes they are meant to be together, which is why he strands them at his cabin.  When the weekend is over, can love win the day?
As you can see from the excerpt they are going to need all the magic The Cabin has.
Smiling, she poured a little of the lavender-scented bubble bath oil into the hot tub and turned on the jets. Slipping into the warm water, she watched the flames dance in the fieldstone-framed fireplace that consumed most of the East wall. A large dark brown fur rug covered the floor between the hot tub and the bed that was nestled into an alcove. One of her life-long fantasies was to make love on a fur rug in front of a roaring fire with the snow blowing in the background.
She refilled her wine glass. “Not likely to happen this weekend.” Leaning back, she let the swirling warm water ease the knots from her lower back muscles.
“Are you part of the getaway?” a deep gravelly voice asked.
Toria shot up and spun around. “Who the hell are you? And what are you doing in my cabin?” She could have sworn she’d locked the door.
“Right now, I’m the guy enjoying the view.”
Realizing how exposed she was, Toria sank back under the bubbles. The man stood less than three feet away. A fitted black button down shirt hugged his arms and chest. Worn blue jeans clung to his hips and offered a wonderful view of his erection.
Toria jerked her eyes up to where they belonged and met a crooked smirk.
“Honey, while I can’t complain about what I’ve seen, female companionship isn’t something I’m looking for this weekend.”
“I’m not some hooker,” she screeched.

For a chance to win a copy of The Cabin ~ Toria and Neal, swag, and copies of my other 'hot' summer books join me at http://lynceeshillard.wordpress.com/ for the Hot Summer Nights blog hop June 20 - 24.
Thanks ~
Lyncee
Posted by Lyncee at 6:47 AM