Shifters are all the rage right now. There's Sam on True Blood, the characters on Grimm and Supernatural... you name it, there's probably a shifter for it. And why not? There's so much you can do with a character who can change shape. I had always wanted to write about black cat shifters. I love black cats. Probably because I have one. He's slinky, goofy and there are times when I swear all I can see on his face are his eyes.

An idea came to me the one day. A witch who gives away black cats for Halloween. Now, that might seem silly, but it's better than a witch doing something awful to them. Anyway, so my cats can't be single children. Nope. There is a litter. The witch who gives them away isn't in a lot of the story, but what happens to her cats is very important.

The first story in the series is called Cat Class. Why? I was listening to way too much Stray Cats when I was writing them. Here's a little bit about the first book. 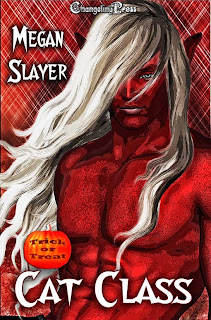 He's got cat class and cat style, but can he win her heart?

Trust a witch to give away black cats on Halloween.

Hayden knew her cat was different the moment she picked him up from the box at old lady Hildegard's house. But there's a full moon out this Halloween, and Hayden's about to find out just how special her fur baby truly is.

He's got cat class and cat style, but can he win her heart?

EXCERPT:
The man folded his arms. His black hair shimmered in the harsh light, and his eyes glowed the same shade of green as her cat’s. He even had the same odd way of staring at her as if he knew what she was thinking, and he talked like he knew all about her cat.
“Do you want my purse?” She stuck out her hands. “Take it.” The guy might remind her of her cat, but cat shifters were the stuff of legend. Besides, didn’t Halloween bring out the crazies? Yes, he was some lunatic in character trying to scare the shit out of her... and it was working. She shivered. “Take it.”
“I’m taking you home.” He swatted her hands down. “There’s a long story I need to tell you, but the short of it is yes, I’m a shifter. I chose you as my human, and now I’d like to go home and explain where you won’t freak out.” He inched toward her. “I won’t hurt you, but I will rip the limbs off the asshole who dicked you over at lunch. Now let’s go. It’s freezing, and I’m not fond of showing my ass off in public.”
“No.” She held her ground. “I don’t know you from Adam and you want me to take you home? No way, buddy. Blow.”
“Now that’s just mean.” He scratched his brow. “Okay, look, I come from a long line of shifters. Black cat shifters. My litter had four. Hildy knew about us and protected us. Somehow she knew you needed me. I’m glad you took me home because I knew you were the one for me.” He stepped closer to her. “Hayden, I need your help. We aren’t legend, and some bad people know about me. You’ve got to help me.” He crouched down before her and curled into a ball. His human form morphed into a cat. After a moment, the cat sat on his back legs and stared up at her. He even had the tiny white tuft on his chest.
“Godzilla?” Hayden swayed on her feet. This wasn’t happening. Her cat was a cat, not a shifter. She collapsed on the nearest bench and rested her head in her hands.
A pair of bare feet strode over to her. She glanced at the legs connected to the feet. The man squatted down in front of her. The mystery man who claimed to be her cat. Tears blurred in her eyes. What else could she do? Laugh or cry?
“Hayden, honey, shifting destroys my clothes.” He tipped his head to look her in the eye. “Let’s go home. I’ll explain everything there. I’ll show you what I am.”
“Show me. That’s a terrible come-on line, especially in the park. How do I know you’re not another creep like the one I went on the date with?” God help her, she wanted to go home with him. But what the hell? Was he really her cat? She stood and shrugged out of her coat. Might as well help him. “You know what? After the night I’ve had, I’m numb. Take this. It’s girly, but it will keep you from getting arrested.”
“I’m supposed to save you,” he said with a smirk. “My name is Joel.”