The Trouble With Dragons

And when I say dragons, I mean my two personal dragons, Depression and Anxiety. 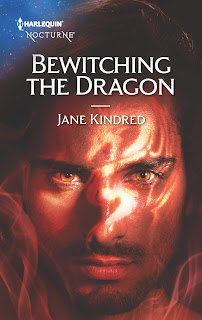 But first, good things are happening. The second book in my Sisters in Sin series, Bewitching the Dragon, was released on Tuesday, and yesterday, the following announcement went live in Publishers Marketplace:

Author of BEWITCHING THE DRAGON, Jane Kindred’s THE DRAGON’S HUNT, about an immortal Viking cursed to lead the Wild Hunt and the tattoo artist who reads the tapestry of fate in the ink on his skin, to Kayla King at Harlequin Nocturne, in a nice deal, in a three-book deal, by Sara Megibow of kt literary (World).

Now, I look at that description, and I think, “Hey, I’d really like to read that!” And I wrote it. Which puts me in a panic, afraid the book can’t live up to that one sentence.

A lot of stuff goes by in a blur of sulfurous smoke when your Depression and Anxiety dragons are spiraling out of control. And the mad state of affairs in the world right now really isn't helping any, to be perfectly frank.

But writers write. So I keep pushing myself onward. Onward and upward. Or, in the words of my least favorite Narnian chronicle, The Last Battle, “further up and further in.” The latter is C.S. Lewis’s exhortation to fully experience God’s abundance. In those scenes, set in the afterlife, the Narnian dwarves steadfastly refuse to see any of the good around them, insisting they’re being fed straw and dirt instead of delicious fresh fruit from Aslan’s kingdom.

That’s kind of what being depressed is like. Not that having a book published tastes like straw and dirt, but it doesn’t taste delicious, either. It doesn’t taste like much of anything. I just have to hope the book tastes good to everyone else. Or at least someone else. Meanwhile, I’ll just sit here in this dusty barn and chew on an old root and hope for the best.

But enough about my personal dragons. The dragons I really want to tell you about are the ancient Sumerian demon, Kur, in Bewitching the Dragon, who turns out to be surprisingly endearing despite his namesake, and the Jörmungandr-esque dragon in the forthcoming The Dragon’s Hunt. Jörmungandr is the sea-encircling ouroboros from Norse mythology destined to kill and be killed by Thor during Ragnarök. (As an aside, I cannot wait for that movie to come out—and by the by, my Viking Leo looks quite a bit like Chris Hemsworth, just so you know.) But the other inspiration for my Norse serpent-dragon happens to be my favorite Narnian chronicle, The Silver Chair.

I have to confess, I’ve always had a thing for the witch—“the Lady of the Green Kirtle”—who enslaves Prince Rilian and enchants him as the Black Knight, only to allow him to return to himself during a single hour a day while tied to the accursed silver chair in the underworld. (Okay, so she was going to dig her way up into Narnia with goblins and gnomes or whatever and invade, but except for that, I totally would have stayed with her and her soothing harp-playing and incense, denying that I’d ever seen the sun in the sky and swearing it was only an exaggeration based on my knowledge of a lamp and a ceiling.)
But my weird fantasies aside, the curse my Viking hero Leo is under in The Dragon’s Hunt was inspired by Rilian’s curse, and the dragon in the story is, in my head, none other than the one the witch turns into in The Silver Chair. (If you’ve been following my books since my debut, The Fallen Queen, you may have noticed I have a thing for enslaved, moody princes under spells who wear black and the delightfully sweet-voiced wicked ladies who own them.) ;)

If you’re a dragon fan (or just a fan of hot, moody dudes), Books 1 and 2 are available now.

When Sedona's most eligible bachelor is accused of murdering a local psychic, medium Phoebe Carlisle finds herself drawn into the danger that surrounds him—by the meddling of the shades she channels and by his irresistible charms. A public defender and a gifted medium, Phoebe is devoted to justice—and not just for the living. Proving Rafe Diamante's innocence means conjuring up two shades who were former lovers and now ignite the chemistry between their hosts.

Rafe can't afford to lose control and act on his feelings for Phoebe. His unfulfilled sexual tension begins to stir something inside him—the legacy of Quetzalcoatl. But as these newfound abilities awaken a dormant power in Rafe, can he stop the real murderer in time to claim his true destiny?

One Night with a Dragon...

Ione Carlisle worked hard to be accepted by the Sedona Covent, but now everything is falling apart. Especially when she lets loose for a wild night on the town and ends up with the one man she should be avoiding at all costs—the man who came to Sedona to fire her. He ignites in her a carnal need that she can’t and won’t ignore...

Buttoned-up assayer Dev Gideon’s loyalty to the Leadership Council should be reason enough to resist Ione. Never mind that she stirs the ancient demon secretly bound within him. But their blood connection is undeniable. And now Dev must risk his reputation, and his soul, to save Ione from a vigilante intent on destroying her and the entire Covent, even if it means unleashing the monster inside.

Jane, this book sounds so exciting. I'm sorry to read about your own dragons. How difficult that must make your life, esp. your writing. I love the references to the Narnia Chronicles. My son gave me the whole set of audio books and I loved listening to them. Lewis certainly delved into deep spirituality--along with telling a great story. Best wishes on your new release.

Ooh, I grew up inhaling C.S. Lewis and the Chronicles of Narnia - this post made me want to read them all over again, not to mention your books. :) Congrats on the new release!