Thank you for visiting with me today. At the urging of a friend, I wrote my first paranormal romance, titled My Secret Mate. When I started writing, I knew the hero, Sean MacKenzie would be a dragon shifter, but I didn’t realize he could take more than one form.

Dragons are the stuff of fantasy. We have read Anne McCaffrey’s dragons and fell in love with both the dangerous and protective aspects of their personalities. But having a dragon hanging out in a small Ohio town would be something impossible not to notice, so I needed to have my hero also become something a little more “normal”— a big black dog. The dog becomes the friend and protector of our heroine and allows for Sean to spend time with his mate before he can claim her. After all, if you have waited three hundred years for your one true love…what’s a few more years??

With the dog form, I loved writing about some of the silly things dogs can do, like take up the whole bed. I have two small dogs and feel like my king-sized bed isn’t big enough at times. I can’t imagine having a large dog sharing my small double-sized bed. 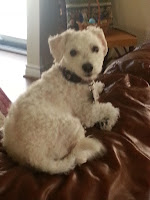 I invite your readers to visit my make-believe town and see what happens when a shifter finally finds his one true love.

EXCERPT:
Sean lay on the rug while he listened to his mate running the water upstairs. With his enhanced shifter senses, he heard each piece of clothing fall to the floor. He ached to race up the stairs and join her in the tub…as a man, not a dog. But it was too soon. She hadn’t accepted him, nor did she know his uniqueness.
Ironically, her parents understood. He’d often been a guest at their house. They’d accepted his heritage, and enjoyed learning about his trips to visit Macy. It gave them comfort to know he watched over and protected her. Sadly, they hadn’t been able to see them bonded. But he believed they continued to observe their daughters in the afterlife. They’d be there in spirit when he started his life with Macy.
Climbing to his feet, Sean shook from head to tail, letting his sadness fly away. Unable to be away from her for a moment longer, he bounded up the stairs. The silence of the house was broken by the occasional splash of water. He pushed his nose against the door, but it was closed. With a quick shift, Sean stood in the hallway as a man, turned the knob, and opened it. Then shifted back into his dog form.
Nudging it open, he padded into the room and plopped down on her towel on the rug in front of the tub. The scent of lavender filled the room. With his head on the edge of the bathtub, he studied his mate. She lay back in the water with her eyes closed. Her hair was piled up on her head, and he could see her full breasts through the water. Moisture beaded along her neck and chest. Sean wished to reach out with his tongue and taste the droplets.
He warred with his desires. A growl of frustration left his lips.
Macy’s gaze locked with his. Her eyes widened as she glanced from the door to the dog. “What are you doing here? You scared me. I thought I closed that.” She waved her hands at the dog, and he moved off her towel. But not before appreciating the sight before him. Macy grabbed the blue towel then stood and wrapped it around her body. She patted him on his head. “Want your turn in the tub?” She giggled.
The sound of her laughter was a balm to his soul. It lightened his heart but also made him more determined to protect her.
Sean followed Macy to her bedroom and jumped onto the bed. Laying his head on his paws, he watched her slip into a nightgown.
As she turned around, Macy put her hands on her hips. “Get down, Moonlight. You can’t sleep there.” She started toward him.
Sean rolled over on his back and exposed his stomach. Maybe, if I play my cards right, she’ll think I’m too cute to kick out of bed. Not working? He moved his front legs in a begging motion. See, I’m cute and harmless. The perfect little snuggler.
“Don’t fight with me.” She pushed on him, but he fell to the bed like a limp noodle. “Fine.” She stomped over to the light switch and turned it off then climbed under the covers. “Just don’t get mad at me if I push you off during the night. I’m not one for sharing the blankets.”
Duly noted… Sean smiled. When he heard Macy’s soft snores, he shifted to his human form and held her in his arms.

My Secret Mate is available in the Daydreams and Night Desires box set.

Daydreams and Night Desires...drift into six tales of magic, mayhem, and love.
My Secret Mate by Melissa Keir
Fall for a Shifter Who Has Waited a Lifetime for his Mate….
As Sean shares his secret with Macy, can she learn to love a man who is something more, or will she give up on her own magical happy ending?

Wishing For It All by R.M. Duffy
What would you do if you were granted three wishes? After discovering a magical lamp and the beautiful genie Keara, Drew Preston thought he knew exactly what he wanted to make his life complete: the dream job, the dream woman, and the whole happily-ever-after life. But what if he made the wrong wishes? What if instead of the wishes, all he wanted was the genie?

Night Whispers by Mia Bishop
Rissa had life all figured out until the accident, but her world is turned upside down when she finds herself being hunted by a dragon in a magical land. With Griffe, her rescuer and guide by her side she finally feels safe and complete, but can she continue to trust him when she realizes he's hiding something from her?

An Evening in Crossroads by Kate Richards
Shifters have never been this vampire's cup of blood, but Mane Wolf shifter Roberto may change that in a club called Crossroads.

To Capture a Dragon by Lisa Kumar
When Lord Eacion, leader of the dragon fae, visits Anni Brownston’s village, he takes over her life for a day—and one glorious night. But when the next morning dawns, will Eacion’s rash actions and her own fears about her lame leg kill any future between them and consign her to a fate they will both abhor?

Chasing Unicorns by D. Lin Scott
As a female fairy, Fiona craves a mate but knows there is none left after the Great War wiped out all fae. Human Bryce Hollinsworth will do anything to save his grandfather, even if it means trusting another species. Can Fiona and Bryce overcome mutual distrust and fear to fall in love?

~~This set features strong language and sexual situations between males/females, males/males, vampires, fae, and shifters guaranteed to steam up your e-reader and make you believe in a happily ever after~~

Only $0.99 cents or free with Kindle Unlimited
Amazon:  https://www.amazon.com/Daydreams-Night-Desires-Drift-Mayhem-ebook/dp/B07BNNZJJJ

Melissa Keir has always wanted to be an author when she wasn’t hoping for a career as a racecar driver. Her love of books was instilled by her mother and grandparents who were avid readers. She’d often sneak books away from them so that she could fantasize about those strong alpha males and plucky heroines.

Melissa doesn’t believe in down time. She’s always keeping busy. Melissa is a wife and mother, an elementary school teacher, a movie reviewer with WHMI (a local radio station), owner of a publishing company as well as an author. Her home blends two families and is a lot like the Brady Bunch, without Alice- a large grocery bill, tons of dirty dishes and a mound of laundry. She loves to write stories that feature happy endings and is often seen plotting her next story.

She’d love to hear from you!

Thank you for sharing my book and my insights about my story with your blog followers.:)

So glad to have you here! I enjoyed the excerpt and loved your puppy pics! Good luck with your book!

Sorry I missed your post, Melissa. Wishing you much success. BTW, I love the puppy pics, too.

Aw, I have a puppy too, a little Maltese. Such a cutie you have there! Good luck with your books. They look fascinating!