So I Wrote a Devil Book... by Jane Kindred

When I started writing Sisters in Sin, I knew the Devil would eventually show up. After all, these sisters seem to have an uncanny ability to attract serpent-identified dudes, and Satan is the ultimate serpent. What's more, the Carlisle sisters are linked to the original temptress—not Eve, but Lilith. But I didn't expect to be writing Theia's story quite yet. There were three other sisters' stories still to tell.

The publishing biz being what it is, we didn't quite get to sisters five, six, and seven. Which I'm actually okay with. I may come back to them at some point in the future, but their stories are complicated and maybe aren't mine to tell. But I did manage to write a final companion story, Kindling the Darkness, which comes out later this year.

At any rate, Theia's story, Seducing the Dark Prince, had to be moved up. Which meant Lucien had to make his appearance. Now, Lucien isn't literally Satan, but to elaborate would mean giving too many spoilers, so suffice it to say, Lucien has issues. As you might infer from the cover, he has a bit of an Oliver Queen (the Green Arrow) complex. What he's doing nocking an arrow with his shirt off, I don't know. But who's complaining?

One of my favorite things about Lucien is that he isn’t an alpha hero. He tries to project an alpha façade, but Theia sees right through it. And when he gets in over his head with one of my actual alphas, well, let’s just say, that was my favorite scene to write.

The whole gang is here in Book 4—all of the Carlisle sisters and their dragon-shifter beaux. And a certain character you probably wish was dead rears his ugly head again. But I promise, he’ll get his comeuppance. As Evie says to Beni in The Mummy (the good one, with Brendan Fraser and Rachel Weisz), "Nasty little fellows such as yourself always get their comeuppance... Always." 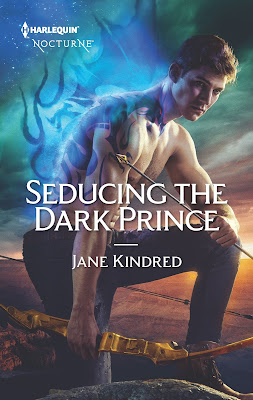 Hell Might Be Heavenly...for One of the Sisters in Sin

Lucien Smok is heir to the Smok fortune. He's also the crown prince of Hell, a legacy he despises. Clairvoyant Theia Dawn tries to convince herself that she's only interested in Lucien because of his family's role in the persecution of her ancestor, not because he's the most beguiling man she's ever met. The attraction that burns between them might be her downfall. Or it might be his salvation.

Seducing the Dark Prince is available now from the following retailers:

Sounds like a great story! I love that cover!

Thanks, Maureen! I'm partial to my little devil. ;)

Sounds darkly delicious. And no complaints about the shirtless thing from me at all. ;-)

What a great cover! Your book sounds fascinating, Jane, as does the series. Best wishes!