I’m home from the Reno West Coast Crime conference. In addition to hosting a paranormal suspense panel, I attended excellent workshops and met a bunch of interesting new authors.

I always like to read authors I’ve met personally, talked with or listened to on author panels. It makes their stories resonate more deeply, to know something about the author.

I became interested in Diana Gabaldon’s Outlander series after hearing her speak about how she decided to write that series. And her presentation on the decisions she and the filming crew made when the books were adapted for the Starz series pointed out the difficulty of cutting a six- hundred-page novel into 60 -minute episodes for the Starz mini-series.

At the first writers’ conference I ever attended, Lisa Gardner, the guest speaker, told us about sneaking out of the house and driving downtown to interview prostitutes for one of her first books, Say Goodbye.  Now I’ve read more than a dozen of her novels.

At that same conference, a handsome ex-lawyer I’d never heard of, Bob Dugoni, congratulated me on winning first place in the conference’s unpublished writer contest that year. He was so nice, I picked up one of his books and read it on the plane ride home. It was really, really good. Now, everyone who reads suspense knows his name.

So, I attended Left Coast Crime this year, not just as an author, but also as a reader…a reader with an eye out to discover some new favorite authors. Some of them have just written their debut novel. Others are only new to me. I tried to make some type of personal connection with each writer on this list.

Please, take a look, and give some books I’ve listed a try, if you like suspense or crime fiction. Or, check out the whole gallery of titles for each author at your bookseller of choice.

Todd Borg - Tahoe Blowup. When Tahoe detective Owen McKenna’s cabin narrowly escapes burning in an arson-set forest fire, the local fire department hires him to investigate. As more fires follow and people die, Owen can’t tell if the fires are an act of eco-terrorism or a method of murder. Why I’m reading – The author has a large series (15 books to date). Several of his plots interest me. He was nominated for a Lefty for Best Mystery. Plus, the detective has a Great Dane for a sidekick. (This title is book #2 in the series).

Steven Cooper – Desert Remains.  A literature-loving homicide detective and a reluctant psychic stalk a psychopath who signs his gruesome crime tableaux with petroglyphs in the Arizona desert. An ingenious and promising series debut. Why I’m reading – Steven and Shannon Baker were both so knowledgeable on a panel about law enforcement research. Cooper is a former TV reporter with multiple Emmys. The stuff he said about research made a lot of sense. Plus, his new novel is set in Phoenix, so I get to test those research skills. 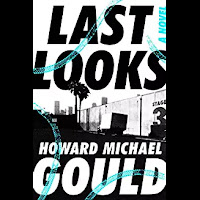 . Howard Michael Gould – Last Looks - This book is touted as a new spin on a Hollywood P.I. mystery. With a blend of humor and suspense that calls to mind Harlan Coben and Robert Crais, Howard Michael Gould brings to life the quirky Charlie Waldo, a former cop confined to 100 worldly possessions and the claustrophobia of his own guilt over a former case gone bad. His journey back to the world is a ride well worth taking. Why I’m reading – My roommate Sharon Moore and I both met Howard the first night in the Lobby Bar and we found him delightful. You know how you feel when someone talks with you and listens, I mean, really listens? That’s Howard. His pedigreed background is Madison Avenue, where he won three Clios, and he was the executive producer and head writer on the TV show Cybill when it won the Golden Globe for best comedy series. I’m hoping his move to novels will be just as golden. It’s slated for publication in August.

Timothy Halliman – A Nail Through the Heart - American travel writer Poke Rafferty is out to right some serious wrongs on the predatory streets of Bangkok. While attempting to adopt a homeless girl, rescue a potentially murderous urchin known as Superman, and build a lasting relationship with the former bar girl he loves, Poke is pulled into two brutal mysteries. One involves a notorious Khmer Rouge torturer, the other a series of child-porn photos.

As he doggedly plumbs these ghastly depths, Rafferty matures from a play-it-as-it-lays layabout into a man willing to meet his lover's culture more than halfway and find his moral compass at a time when the victims can be as guilty as the murderers are innocent. The fact that the referenced pedophile photo series and Phnom Penh torture house both existed heightens the impact of a narrative that's already deeply felt. Hallinan is off to a surefooted start with this new series. Why I’m reading –Halliman is a veteran writer who happens to be new to me. I attended both of his panels and, when he described his characters in the Taking Emotional Risks panel, it was easy to see this man cares deeply about his characters. He writes 2 series. When I asked him, after the panel, which book to read first if I love character-driven suspense, he recommended this first book of his Bangkok series.

Cheryl Reed –Poison Girls - It’s the summer of 2008. Chicago’s Hyde Park Senator is running for the White House, the city is vying to host the 2016 Summer Olympics, and “Poison,” a lethal form of heroin, has killed more than 250 people, including dozens of suburban girls from prominent families.

Natalie Delaney, a crime reporter from the Chicago Times, discovers that daughters of Democratic powerhouses are the real targets. Obsessed with finding who is behind the killings, Natalie becomes entangled in an underworld where drugs, cops, gangs, politics, and privilege collide. Risking everything, this reporter becomes the story… Why I’m reading- Cheryl is a former editor and reporter at the Chicago Sun Times, a professor at Syracuse University, and a journalism grad from U of Missouri, my alma mater. Her past is so full of excitement and awards, I’m willing to give her debut fiction novel a try—and it’s a plot that could have been ripped from today’s headlines. 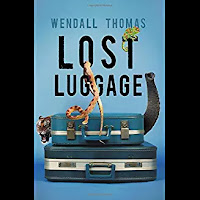 
Back in Brooklyn, when she reads about smugglers stopped at JFK with skinks in their socks or monkeys down their pants, she never imagines she will join their ranks. But days after the pet store owner next door to Redondo Travel is poisoned, Cyd wins a free safari. Her boss, Uncle Ray, wants to cash it in for computers, but Cyd is determined to go. When Roger turns up at the Redondo clan's door, Cyd invites him along as her "plus one." And just like that she is thrown heels-first into the bizarre and sinister world of international animal smuggling. Why I’m reading: This screen-writer turned author’s debut novel sounds like a hoot. Readers have described it as the travel agency business’ equivalent to bounty hunter Stephanie Plum.

Mark Wheaton- Fields of Wrath - Following his ordination as a priest, Father Luis Chavez returns to the mean streets of his youth, hoping to put his past behind him. But the brutal murder of a worker in Ventura County’s vast farm fields compels Luis to return to his criminal roots in order to unravel a massive conspiracy. Teaming up with Michael Story, an ambitious Los Angeles deputy DA, Chavez goes undercover as a farm laborer to bring down an immense human-trafficking ring tied to one of California’s most prominent and powerful families.

Fighting to stay on the path of the righteous while confronting evil at every turn, Father Chavez finds himself in a battle of good versus evil, with the souls of hundreds hanging in the balance. Why I’m reading – A Priest who infiltrates a human-trafficking ring caught my interest. Plus, I have human trafficking in my work-in-progress, so it will be interesting to compare.

James (Jim) Ziskin - Stix and Stones - "If you were a man, you’d make a good detective.”


Ellie is sure that Sgt. McKeever meant that as a compliment, but that identity-a girl wanting to do a man's job-has throttled her for too long. It's 1960, and Ellie doesn't want to blaze any trails for women; she just wants to be a reporter, one who doesn't need to swat hands off her behind at every turn.

Adrift in her career, Ellie is back in New York City after receiving news that her estranged father, a renowned Dante scholar and distinguished professor, is near death after a savage bludgeoning in his home. The police suspect a routine burglary, but Ellie has her doubts. When a second attempt is made on her father's life, in the form of an "accident" in the hospital's ICU, Ellie's suspicions are confirmed.

Then another professor turns up dead, and Ellie's investigation turns to her father's university colleagues. She embarks on a thorny journey of discovery and reconciliation, as she pursues an investigation that offers her both a chance at redemption in her father's eyes, and the risk of losing him forever.
Why I’m reading – First, every book of Ziskin’s has an intriguing premise. Second, the man has won almost every suspense award out there, and his latest novel was nominated for Lefty’s Best Novel award. Third, he was friendly and open and not at all “lofty” at the conference, despite being one of the best-known authors at the conference. Based on his recommendation, I’m starting at the beginning of his series.

Sandy Wright loves to take ordinary characters and thrust them into extraordinary situations.
In her debut novel, Song of the Ancients, a Midwestern woman moves west for a fresh start. Instead, she becomes the prey in an ancient war to open an underworld portal buried in Sedona, Arizona's magical red rocks.

Readers interested in the dark side of our supernatural world will enjoy of this paranormal suspense series, written by a real-life Wiccan high priestess.
And look for Sandy’s new suspense, Crescent Moon Crossing, to be released in 2018.

I enjoyed reading a little about the 'story, behind the story' and the authors. I didn't know that about Lisa Gardner, but it's interesting to know since I've read most of her books. Thanks for sharing!

What a great conference! I'm intrigued by the books you mentioned and why you're reading them. Except for Lisa Gardner, all those authors are new to me. Thanks for the recommendations.

Looks like lots and lots of good reading! Conferences can be so much fun!