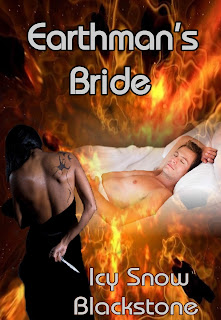 Earthman’s Bride started out as a short story which ran away with my imagination.  I knew what I wanted to say, but the story had been told many times before with many variations:  a young woman given to a conqueror as part of a peace agreement...he desires her...she fears him,...eventually they fall in love... Okay, so far so good, but how to make it different?  How to keep it from being a rehash of every book ever written with the same theme?  Would changing the setting help?  Making it medieval...paranormal...futuristic?  And the conqueror?  Would he be a warrior...a beast...a supernatural entity?  An older man, inured to the cruelty of war...or a much younger one, still able to find some tenderness in his life?

There are too many science fiction stories of invaders from other planets coming to Earth a la War of the Worlds, but all of them are told from the Earth’s point of view.  That settled it for me.

I wasn’t going that route.  Not this little writer.  I’d make my story tell the other side of the coin.  I’d make the Earthmen the conquerors, barging into another a galaxy like barbarians, attacking and conquering.

My Earthmen aren’t very nice people.  Having depleted their own natural resources, they head to the stars looking for planets having the elements they lack.  Using force, they “accept” these worlds into the Federation, placing them under their “protection” and then haul their natural resources back to Terra.  Since most of the planets are less developed than theirs, it’s easy to subdue them with superior firepower and take what they want.

The planet Tusteya is different.

They received the Terrans in peace but within 30 minutes of their meeting, peaceful intentions go flying out the window.  Though not as technologically advanced, the Tusteyans knew of space travel and traded with other planets and weren’t about to allow themselves to be enslaved by aliens.  The resulting war, one in which the Tusteyans put up steady but futile resistance, ended in only one small tribe, the Elius, remaining free while all others were enslaved by the Federation’s representative, now called the Governor of Tusteya, Lieutenant Philip Hamilcar.  Ordered to stay behind with his men to keep the natives under control, Hamilcar was, in fact stranded on the planet as punishment for voicing his disapproval of the way the Tusteyans were treated.

At the opening of the story, thirty years have passed, Hamilcar has died, and his son, another Philip—a young man barely twenty—has taken his place.  Alcin Spearman, leader of the Elius, asks for a truce, and to show the sincerity of his intentions, offers his 17-year-old daughter Rebeka to the new Governor to cement the peace.  Alcin is certain the young Earthman will want Rebeka, and once he meets her, Philip—being young and male—definitely does.  What he doesn’t know is that his bride-to-be has an agenda other than simply being a peace offering.

Once Rebeka has gained his trust, she’s to kill him, and during the chaos of his death, her father and his men will storm the palace and end the Terran tyranny once and for all.

Rebeka goes into the marriage willingly, hoping against hope that some miracle will occur to prevent her from killing her new husband.  Nevertheless, everything appears to be going just as her father wishes...Philip is fascinated by Rebeka, eagerly agreeing to the peace.  The wedding takes place, and Rebeka is left in the palace her father used to rule, married to an alien whom she’s expected to bed and then kill.  She is completely alone except for the presence of Darius, a Terran android who has been re-programmed to protect her.  Unknown even to Rebeka, however, Darius has his own agenda.  He is capable of human emotion and has fallen in love with the woman whom he has been ordered to protect while she kills his former pupil.

And then...Rebeka discovers Philip isn’t the cruel monster she has been told but simply a young man caught in a fate he didn’t ask for—much the same as she—and everything changes...

For thirty years, Rebeka’s people have fought the Earthmen who invaded their planet.

Now, Rebeka’s father has devised a plan to bring about peace: offer the Earthmen a cease-fire, and cement it by giving his daughter as their leader’s bride. At first skeptical, Governor Philip Hamilcar is swept away by lust but he soon finds he has a rival for his wife’s affections in Darius Marx. An android possessing the ability to experience human emotion, Darius has also fallen in love with the Earthman’s bride.

Rebeka doesn’t want an alien husband and she certainly doesn’t want to kill anyone, but she’s given no choice. Once married to Philip, she discovers her husband more than empathetic to her people’s plight. Soon the two are in love, and Rebeka has to make a choice…

Will she make herself a widow or give up her own happiness for her people’s freedom?

Dressing in the wedding gown that had been packed in the little trunk the guard  brought from the gate, Rebeka had put on her makeup and done her hair and laid out the wedding veils on the bed so they would be nearby when she was called.  Her father had said he would see her married before he returned to the village with the treaty.
“Do you think I look all right?” she asked suddenly, and her voice sounded so loud she almost jumped.  “Will the Governor like it?”
Darius studied her a moment, those blue eyes critical and serious.  Then, for the first time, he smiled.
“She walks in beauty, like the night of cloudless climes and starry skies; And all that’s best of dark and bright meet in her aspect and her eyes.”  He spoiled the compliment by adding,  “Hamilcar will go to his death willingly!”
She turned away, closing her eyes.
“A mind at peace with all below, a heart whose love is innocent,” he went on, cruelly.
“Don’t say that!” she ordered, angry that there were tears in her voice.
“How long will your mind be at peace or your love innocent if you use it to kill?” he asked.
“Why are you doing this?”  Rebeka flung at him.  “You know it has to be done.  It’s the only way.  Why didn’t you say something sooner if you disagreed?”
“Because I can’t actually disagree.  Because your father and Master Martin were set on this course.  I’m only an android, Rebeka, a machine, and I may hold more intelligence than all the men on this planet in my databanks, but if they don’t want to listen to it, they won’t.  So I’ve kept silent.”
“But you think I’ll listen?”
He nodded.
“Then you’re mistaken, Darius.  Because I agree with my father.  Philip Hamilcar must die, and I plan to kill him.”
There was silence for a few moments.
“He could actually love you, you know,” Darius persisted.  “I turned him away from your door three times today.”
“Yes, I heard,” she retorted, and now her smile was sardonic.  “And your excuses were a little lame.  Really, Darius, sleeping all night and all day?  It’s a wonder he didn’t think me ill and call a physician!  You should have thought that out a little more.”
“It worked, didn’t it?”  His smile matched hers in its cruelty.  “Kept him from seeing you, whetted his appetite.  I thought you were going to be the lamb who was slaughtered, Rebeka, but after the way the Governor’s acting, I realize that he’s the lamb in this story!”

The Earthman’s Bride is available in paperback from the publisher’s website: http://www.classactbooks.com/cat-romance/the-earthman-s-bride-41-detail

Posted by Nightingale at 3:28 AM

Thanks. I've had many people tell me h ow much they like Darius over Philip who's supposed to be the actual hero of the novel.

What a great premise for a novel. I love the turnaround view of the aliens as the good guys. Congrats, Icy, on a unique book.

Great cover! I enjoyed the blurb!