Every so often, I get a yen to do a tarot spread—otherwise known as throwing the tarot—for one of my characters. It’s helped me in the past when I’ve been stuck with where to go next, or when I can’t quite figure out my character’s motivations. 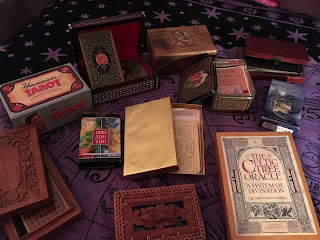 I’ve been throwing tarot since I was in my early 20s, and I’ve developed a bit of a tarot deck addiction over the years. I mean, I have a lot of tarot decks. I’m sure it’s not any kind of record, but at the moment, I count 11 decks that I could easily find in the house. (I don’t keep them in a drawer together or anything; each deck has its own box. And the boxes sit wherever they want to in the house. Sometimes a deck hides for a while. I can think of two others off the top of my head that aren’t anywhere in sight.)

Tonight, I’m using the Medieval Cat Tarot by Gina M. Pace and Lawrence Teng. (Did you know that tarot decks have authors and artists, and they get published much the same way books do? Each deck has its own little booklet of interpretations, and some have separate, full-sized books written to accompany them. I have eight full books on tarot that I can think of off the top of my head.) At any rate, I’m throwing the spread for my main character, Aoife, in my current WIP. Aoife is under an enchantment, so it’s difficult to figure her out, because she doesn’t know her true self at the moment. Hopefully, this will help me make some headway with her.

So here’s the spread: 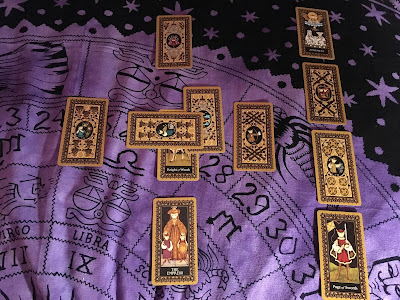 Aoife’s Heart of the Matter is Knight of Wands, Six of Swords, and Eight of Cups. Loosely, these represent “conviction,” “moving forward,” and “taking emotional inventory.” This fits very well with where Aoife is right now. She’s just discovered that she’s being lied to and is determining to fight back, and at the same time, she’s experiencing emotional attraction to a woman she’s just met.

Next, we have the cards above and below the Heart of the Matter (conveniently called Above and Below). These represent what’s on the surface of the current situation—what’s outwardly visible—and what lies hidden beneath in the subconscious realm. Aoife’s cards are Ten of Swords and the Empress. Now, the Empress is one of the cards of the Major Arcana, which represent archetypes and forces outside our control—in essence, Fate. The numbered (pips) and court cards of each suit (there are four, like in playing cards: Wands, Swords, Cups, Coins) are referred to as the Minor Arcana. Here, the Ten of Swords represents the culmination of negative energy around the present situation. There’s nowhere to go but up. Yep. This is very true for Aoife. And the Empress is Mother Nature, the goddess of abundance, calling on the querent to gather her internal strengths and take what she’s learned on her journey to manifest her truth. Interesting; Aoife needs to stop thinking and start doing what she knows is right.

The next two cards to the left and right of the Heart of the Matter, are Behind and Before: the immediate past and the immediate future. Seven of Cups is Aoife’s past: daydreams of happy times, in danger of dissipating as an illusion. Wow. That one’s right on the money. And I was just contemplating having Aoife remember the beauty and riches of the world she once knew. I wasn’t sure if that back story should remain off the page or if we should see it here. I think I have an idea now. The future card, Eight of Wands, says opportunities are coming Aoife’s way, and she needs to take aim. This one could be literal. Aoife is a soldier, so perhaps she’ll soon be in a battle that can tip the war in her people’s favor.

Finally, we have the four cards on the right: Self (where the querent is now), Home (how others see and influence her), Hopes and Fears, and the Outcome. The Self card, Page of Swords, shows Aoife poised on a new undertaking that will bring her greater understanding. So far, so good. Home, Seven of Coins, represents a small harvest—Aoife has what she needs at the moment. Her Hopes and Fears card, Four of Wands, indicates that Aoife may be starting a new relationship, from which she should pause to take joy in the moment. And Aoife’s Outcome? She drew a Major Arcana card: Judgment. Judgment Day is literally depicted on the card. This means Aoife will ultimately succeed, but she’ll have to pass through the fires of suffering, fear, doubt, and toil.

So now we put this all together: Aoife is moving forward after accepting that her past happy life is gone, acting on her new conviction and exploring new feelings as she heads into battle. All around her is negative energy and enemies, but she possesses secret strength in her Empress energy if she will only embrace it. Poised on a new undertaking and understanding the truth being kept from her, she has what she needs right in front of her if she’ll only look—a new relationship that will bring her joy, despite everything that’s happening around her—and, ultimately, she will prevail against the evil in her world. But the fight is going to be hard won.

So there you have it: throwing tarot for a fictional character. What do you think? Silly game or helpful tool to unlock the unconscious?

Jane, your posts are always so interesting. I know very little about Tarot. Your cards are beautiful, works of art. How fascinating that you can use them to discover more about your characters. Best wishes!