I love urban fantasy because of my interest in the weird and gothic. It wasn't hard to acquire. I grew up in a house so creepy many people refused to enter it. My mother--who was the one who insisted we live there--would not go into or allow anyone else near the attic. Really, the crumbling antebellum outbuildings were just gothic set pieces to what went on inside the house.
Ever since then, I've been drawn to the stranger side of life--and, since a good sense of humor is the only way to survive an uncertain childhood, I've always been drawn to any author who puts a comic spin on the paranormal.

Here's a taste of my own novel, where Lydia attempts to understands the type of people who apply to live at the Roanoke:

Lydia blinked, staring at the previous applications, wondering about her current visitor. CP… CP… She picked up a pen, ignoring the fact that she was probably just being nosy, and began to ponder the possibilities. Her pen tapped against the sheets, until the woman looked up and Lydia smiled, forcing herself to at least be snoopy in a quieter way. Most of the rest of the tenant abbreviations were of one word. She started to scribble:
Captain.
Uh-huh. Of what, stupid? Undead European cheerleading? She glanced up at Irena and felt even more ridiculous, before trying again.
Chaplain.
She almost laughed, imagining. Our Lady of the Weirdoes, we beseech thee… Um, no.
Culpepper.
That’s a name, idiot.
Cupholder.
Now, she was just getting ridiculous. She tried not to tap the pen again, letting her mind roam. She didn’t notice Irena finishing the application, holding it out to her.
“Cat Person.” There was a moment before Lydia realized she’d said it out loud. Then, it was her turn to blush.
Irena was staring at her, understandably, her beautiful, dark eyes wide. Lydia wanted to pound herself repeatedly on the head. It took a lot of will to take the papers from her, even more to speak. “I’m sorry. I’m new.”
She saw Irena blush and felt even worse. Who the hell was she to judge somebody else? She was clueless, useless, and probably demon bait. “And I’m unbelievably rude.”
To her surprise, she heard a laugh, warm and amused. Irena was shaking with repressed mirth. “Sorry,” she managed finally. “I’m just not used to anyone saying it without a pitchfork.”
It didn’t seem a likely way to form a bond, but it worked, mostly, Lydia decided, because of the cat person’s humor. Any further conversation between the pair was temporarily interrupted by Geoffrey. To her relief, he was standing in his office doorway, arms crossed over himself, smiling. “Lydia’s new to this world,” he informed the possible tenant. He said it with enough warmth that she could tell he wasn’t angry with her. When he moved forward to collect the applications, the warmth deepened. “There are a lot of God’s creatures for her to meet.” 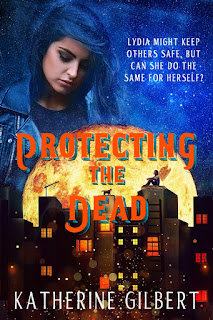 Protecting the Dead
by Katherine Gilbert

Blurb:
After a childhood filled with demons and her devil-worshiping parents, Lydia longs for a quiet, normal life, a safe haven somewhere blissfully dull. Being the manager at the Roanoke Apartments seems to fit that bill. But Lydia soon learns that you can't leave the past behind so easily. She finds herself faced with unclogging drains for werewolves, conducting nightly vampire counseling sessions, and caring for two talkative cats. Then there's the distraction of Geoffrey, the hottest, and most angelic, boss anyone ever dreamed of.  As if that isn't enough, the demon who nearly killed her shows up to finish the job. So much for a peaceful, simple life... 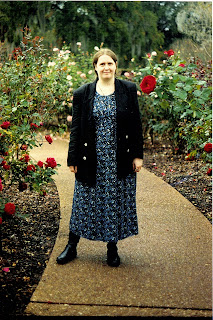 Author:
Katherine Gilbert was born at house number 1313 and then transplanted to a crumbling antebellum ruin so gothic that The Munsters would have run from it.  She has since gained several ridiculously-impractical degrees in English, Religious Studies, and Women's Studies. She now teaches at a South Carolina community college, where all her students think, correctly, that she is very, very strange, indeed.

Love your comedic approach to the genre. Sometimes we take ourselves too seriously! Your book sounds awesome!

Welcome, Katherine. I'm so glad you brought your story to us. It sounds like a fun read.

Welcome! I love urban fantasy as well! Your story sounds like a great read.

Thank you to Paranormal Romantics (and Diane Burton, especially) for letting me be here. I really appreciate being able to be around those who love paranormal romance like I do!

Thank you, too, Nancy and Maureen, for the warm welcome! I just can't write without at least attempting to infuse a bit of humor into it.

Your descriptions of your house made me laugh and shiver a bit! Loved your excerpt. Very witty.